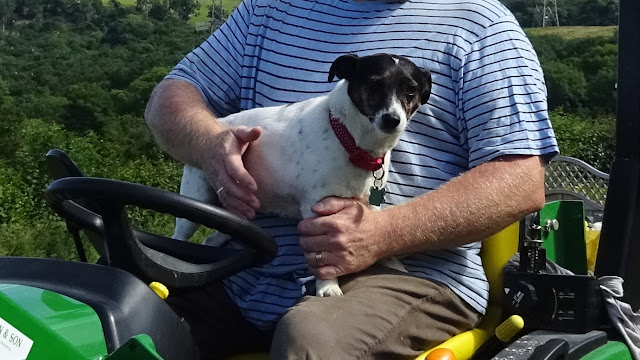 Awww ... have you ever seen such a scared and basically pi**ed off little doggie!!

Rosy hates tractors, she hates when they drive past our house ... which they do numerous times each day ... she hates them when they are parked up doing nothing. she hated our last one, and it was a LOT bigger than this little Series 2 version we have now it was a John Deere 3130 that Lovely Hubby renovated from a wreck to a thing of beauty.  It would have been much too big for the type and amount of land we have here so it was with much regret that it was sold to our former landlord where as far as we know it is still in use on his land. 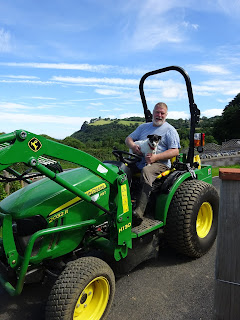 Lovely Hubby has been trying to get Rosy more comfortable around this little one and keeps picking her up for a ride on it ... but each time it's still ears back, wide eyes and itching to be let off so she can bark at the nasty green thing that chugs around the place with Dad on it's back. 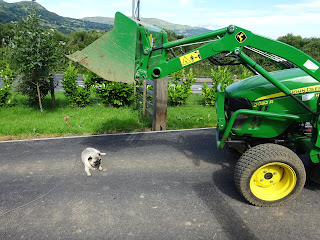 At totally the other end of the spectrum is Suky, she plonks herself down and totally ignores the green monstrosity coming towards her, completely confident that Dad would not dream of running her over. 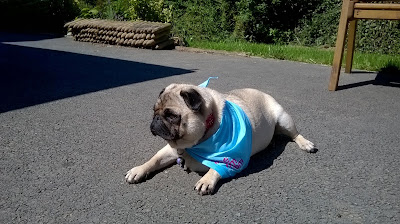 She was far more annoyed at having to wear a bandana when she came out of the groomers.  It was the first time she has ever had a professional grooming session and seemingly she enjoyed every minute and was very well behaved.  She lost a total of 300g in fluff and fur after an extensive brushing session which will help for the weigh in at Tubby Club next week ... hopefully she feels a tad cooler too without all that excess Pug fluff,