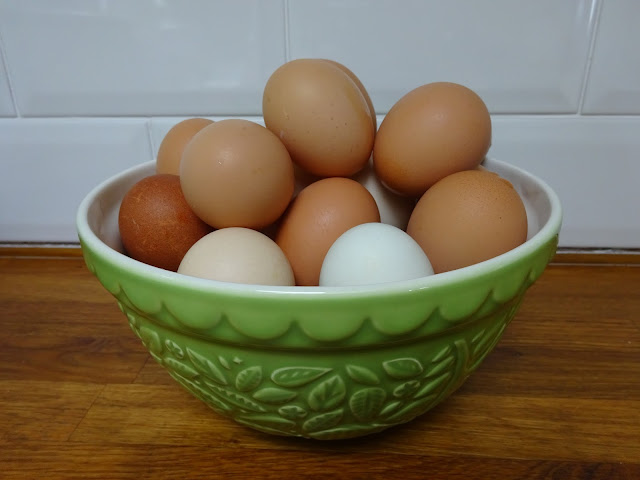 When we went away the other weekend the eggs that the chickens laid were obviously left in the egg boxes all day, meaning they were walked on by the hens over and over, moved around and generally kept at varying temperatures as we had three broodies at the time.  So we don't sell any of these eggs.  Usually when I am here I go over to the henhouse at least three times during each day, to collect eggs and check on the chickens. 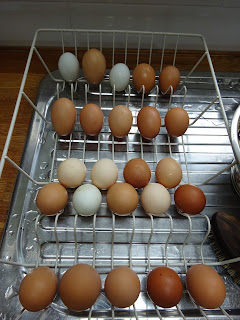 When the eggs have been left for a day or more like this, we bring them into the house and we give them a wash to clean them up a bit  (something you shouldn't do unless absolutely necessary with eggs that you sell) this also enables us to have a good look at them all for cracks or chips.  Then I put them in a bowl for us to use over the next couple of weeks.  Well we've just used the last one, I thought it would be interesting to see how we used them so I kept a bit of paper and made perfunctory notes each time we took some out of the bowl.

It turned out over the last three weeks we have had:  2 hard boiled, 12 fried, 4 scrambled, 3 soft boiled and 3 were fed back to the chickens scrambled, as one of them had a slimy bit in it ... and this is the reason we wouldn't want to sell them.  Better for us to find that than someone who has paid for the eggs. 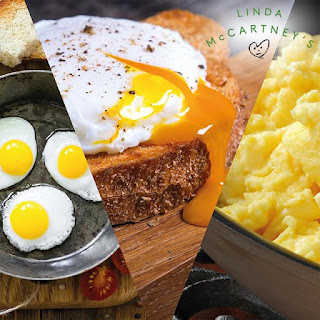 And what's the right royal hoo ha I hear you asking ... well yesterday someone from the Linda McCartney Facebook page put this picture on with the innocent words:

' Scrambled, poached or fried - we just can’t decide! What are you having for breakfast this#MeatFreeMonday? #InspiredByLinda '

It caused a real storm with readers saying that if Linda had been alive she would be a vegan by now, how dare they support the egg industry and include eggs in their products etc etc.  Now this would have been no problem but as the day progressed things just got nastier and nastier.  I bet whoever it was in the Linda McCartney offices that put this up is keeping a very low profile today!!

And yes, I was there in the thread answering queries, putting some folk right on their ridiculous claims and generally trying to tell it like it is.  I don't eat eggs bought from shops anymore, and few bought in items that contain eggs (with of course the exception of my mayonnaise habit), but I would not dream of attacking anyone who does either verbally or in print.  I know that most vegans are very good, caring and compassionate people but the few who start spouting outright lies to get a point across get the rest a very bad name.