The Sheep Along the Fence

I always know when it's going to be a cooler or wet day as the sheep stay in their favourite spot and overnight sleeping area at the top of the hill much, much later than usual.  If it starts to rain heavily they also make for this cover as the bare earth along the fence line shows. 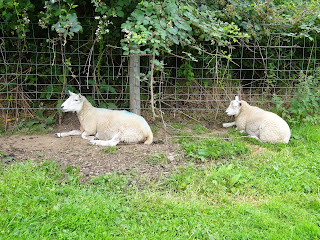 They sit with one front leg tucked up and one splayed out,  mother and son .... 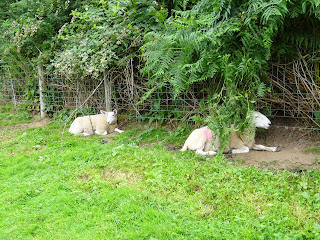 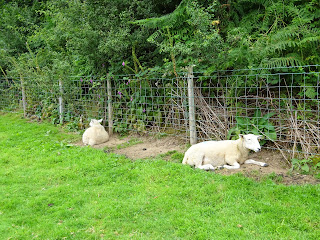 ... and oops, it looks as though this mother and daughter are not on speaking terms today  ;-)

They've gotten very friendly just lately and let me rub them on the nose when they are in a sociable mood.  It's a shame that we've only just become friends because the little boy, who's really not so little anymore, will be going to market soon along with one of the girl lambs.  The other one is being kept as seemingly she is a very good potential breeder from a good mum.  The little ram lamb has faulty back legs and was lucky to survive birth, his twin did not.  He's also very unlucky as he pulled out one of his little baby horns the other day on the fence.

Lovely Hubby is pleased that they are still here as the lambs are keeping the brambles in check, poking their heads through the fence to get at the tasty new shoots .... hence the horn loss when he got his head stuck.

It's now 7pm and they have all gone to bed early and are in almost exactly the same places as on these photos taken this morning.