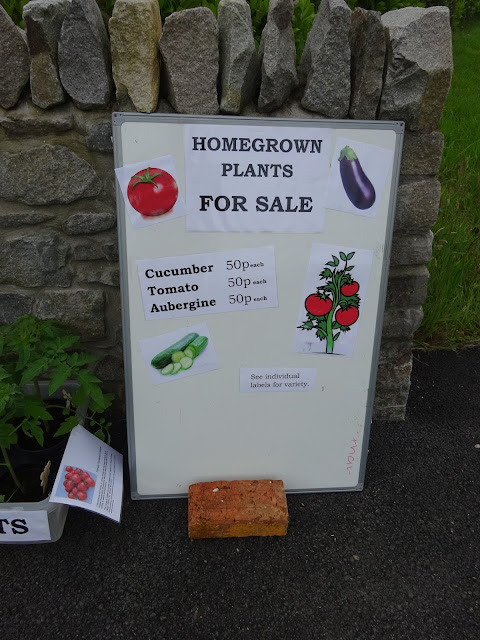 For the past three weekends we have been selling the surplus home grown plants at the farm gate.  This year I'm not looking to make huge profits just to get my money back for the compost, pots and time that I've spent sowing the seeds and potting them on.  I'd rather see the plants go to someone who needs them than end up on the compost heap.

I made sure that the plant pots they were sold in were the oldest and most varied,  and I also checked and double checked that we really didn't need any of the plants for ourselves.  As it is I have far too many tomato, cucumber and aubergine plants growing in the poly and net tunnels.

It's a good way to get people used to stopping here for some small sales too, as in the future we are hoping to be able to do this on a slightly larger scale with the things that Lovely Hubby will be producing in his workshop also for sale. 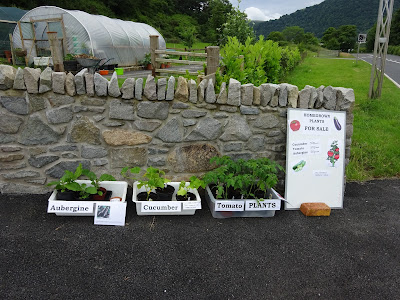 It started off small the first weekend, just like this ... then I added a tray of homegrown herbs, then there were some houseplants, and then this weekend we added a basket of free range eggs.  So it turned into quite a display.

We are collecting the money with an Honesty Box system and it seems to be working very well.  We thought we had had some plants stolen during the second weekend as four were missing when we got back from the cinema on Saturday night, but then £2 worth of change appeared on our doorstep on a day when no plants were sold, so the person that took the plants either had a guilty conscience or simply hadn't had the right change with them when they called the first time.  Either way the money appearing restored our faith in the honesty of folk.

Lots of people stopped and made purchases this weekend, and some had a little chat with us if we were nearby.  There is a lot of interest in the work we have done to this place since we moved in.  We've changed the look of the hillside tremendously and everyone that we spoke to said it was for the better, which was nice.   One couple stopped, bought six plants and then said they were starting something similar to what we are doing on the other side of the valley and had just got themselves two chickens after seeing our girls suddenly appear on the hillside a couple of months ago.

It's nice to know what we are doing is going down well with the locals and the regular visitors to the area   :-)