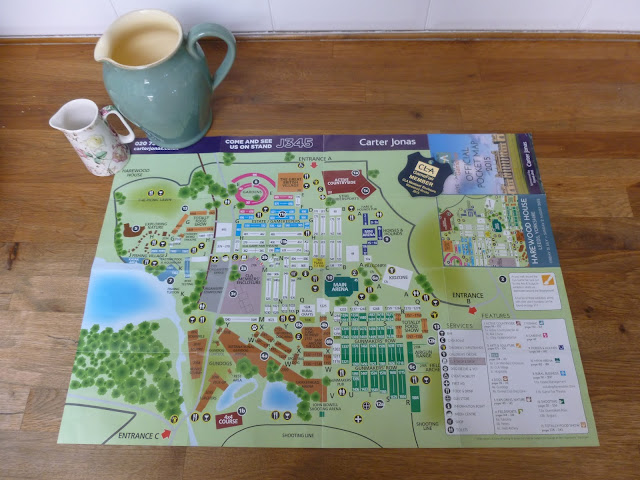 We got back late last night from a wonderful weekend away.

Dropping the dogs off in kennels on our way we set off for Yorkshire on Friday morning.  We were heading for Leeds where we stayed in the Premier Inn in the city centre, and on Saturday morning after an early breakfast we headed to Harewood House and the CLA Game Fair.  We've been to the fair a few times now but never at Harewood House, last time it should have been there it was cancelled due to severe weather so we missed out on going.

It was a really good day, spoiled somewhat by heavy rain moving in around lunchtime, which meant we had to dash from marquee to marquee to avoid getting soaked completely through ... our coats were in the car!!

I treated myself to the two little jugs that you see in the picture with the showground map, which I bought from a little tent selling vintage things  .....

... here they are again with the kettle in the shot so you can see an idea of the size.

I have a thing about jugs, and they are so useful, I have plans for the large green one for this coming weekend  :-)

On Sunday morning after a lovely cooked breakfast we set for home with a detour into Cumbria to visit my elder son Simon and our grandchildren, Kyle and Oscar.   After a lovely time catching up on news, both family and Minion .. yes Oscar's a fan .... it was time to set off again for home. 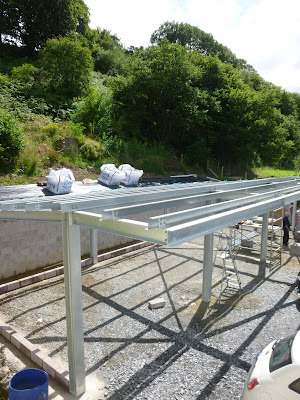 Things had changed a bit since we left.

I'll get some better photos once the guys have finished assembling the framework tonight.  The place is crawling with men at the moment, so I took this photo from the bedroom window during their tea break.  There are the guys putting up the steel structure and  also a couple of brickies working around them getting a band of block work in place ready to pour concrete for the garage and workshop floors.

Lovely Hubby is now on his month long summer holiday, so there should be lots of changes about the place over the course of the next few weeks.  We have a list as long as your arm to work through of jobs for us to do.  But first things first, it's time to go and pick up the dogs from the kennels, they'll have as big a shock as we did when they get back home and see the changes.

Then we have to wait for Lovely Hubby's purchase from the fair to arrive, it's a bit bigger than mine ... although it is also green  ;-)