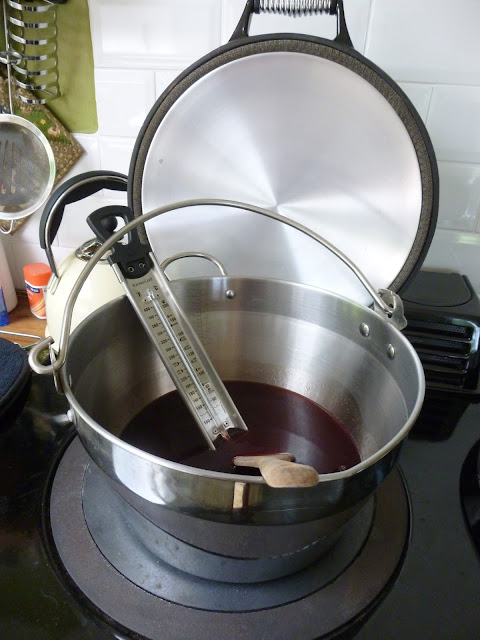 I did eventually get round to the jam making after leaving all the pans, bags of sugar and various bits and bobs warming on the Aga the other day.

The Damsons had been strained through muslin to separate them from the gin and the whisky, and then the alcohols were bottled.  Next the damsons were stoned as I showed on this post.  Then I added enough boiling water to cover the damsons in the pan and brought it back to the boil, it was left to simmer for around twenty minutes .... 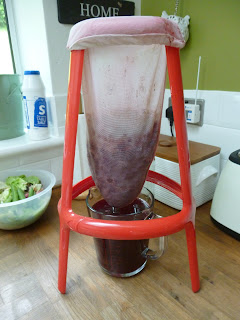 ....  then it was all tipped into the jelly bag and left to drip overnight.

It's always tempting to give the bag a squeeze to get every last drop out ... but DON'T, you get a much clearer jelly if leave it to drip naturally and slowly. 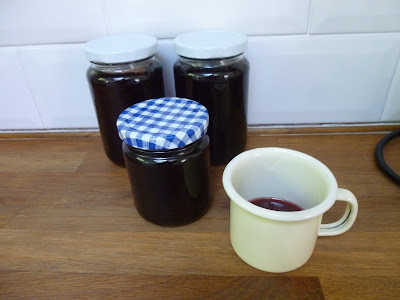 After weighing it I poured the luscious looking, and heavenly smelling liquid from the jug into my jam pan and added it's weight in sugar with a tablespoon of lemon juice, and brought it all to a rolling boil, once jam temperature had been reached I checked for a set on an ice cold saucer and decided to get it into the jars.

As you can see I managed two full sized jam jars , a smaller jar and a little sample for me to try on a slice of toast .... I love chef's perks ;-)

I could have stopped there, but I had a taste of the mush left in the jelly bag and yes, it still had lots of lovely flavour to impart and as I had spent so long stoning the fruit it would have been criminal not to have used it. 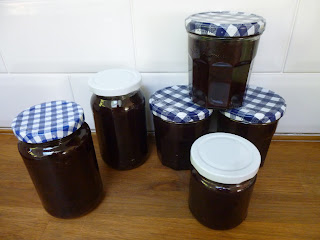 So I set to and made some normal jam to go with my already made jelly.

I added a little bit of water to the mush, just under it's own weight in sugar and another dash of lemon juice and off I went again.  I just about managed it before the Aga temperature dropped too much, having the top lids open is what causes an Aga to drop in temperature and it needs time to get back up to full performance. 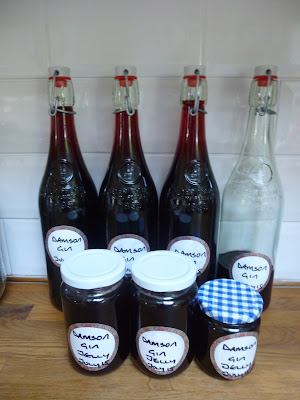 So from two kilos of Damsons, one small bottle of whiskey, one large bottle of Gin and a couple of bags of sugar I got - three and a bit bottles of Damson Gin, three jars (and a taster) of Damson Gin Jelly ..... 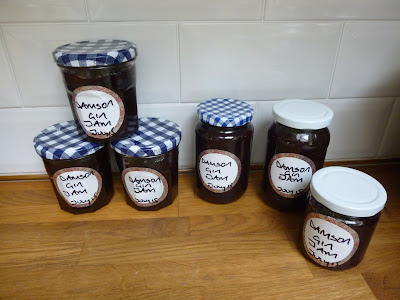 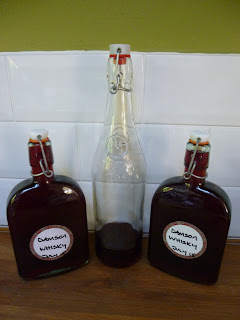 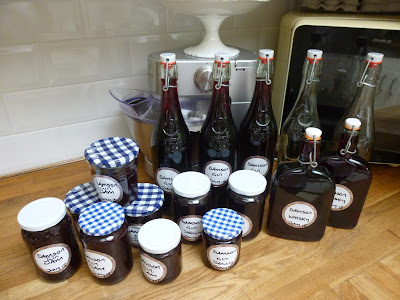 Not a bad few hours work.