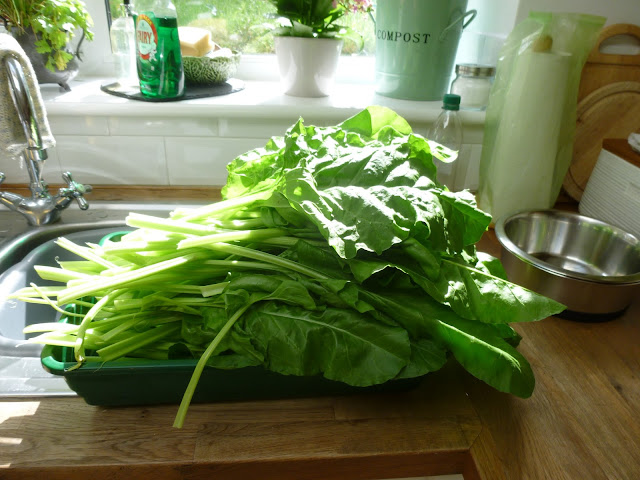 It was the turn of the Spinach to be harvested yesterday.

Just the leaves that were nice and big, the rest of the plants are still in their bed in the polytunnel and by next week there will be enough to do an action replay.  That's the beauty of Perpetual Spinach, if I'm nice to the plants they will continue to produce for a long time yet, and I am nice to them, I've been giving them lots of lovely plant food and fresh compost went down around them yesterday to help them recover from this brutal stripping of all their assets  :-) 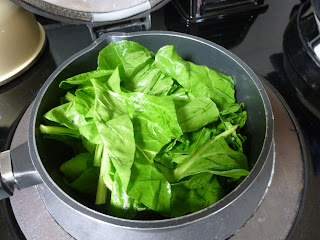 The stems were cut off, and made a tasty snack for the chickens ....  I'm very good to those chickens,  as swapping spinach stems for fresh free range eggs seems like a very good deal to me.  The leaves were all washed, shook a bit and then popped straight into a pan in batches.  The water left on the leaves is enough to stop them sticking to the bottom of the pan until they release some of their own juices. 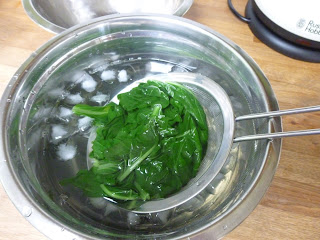 After about three minutes they were pretty wilted so I scooped them from the pan and plunged straight into iced water to halt the cooking process.  With dark green leaves doing this means that they will keep their rich green colour while in the freezer and it also stops them from overcooking. 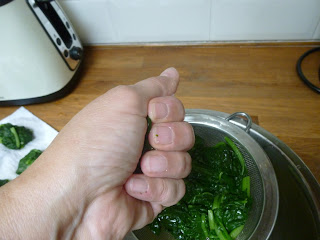 Once cooled, I squeezed out as much of the excess water as I could ... 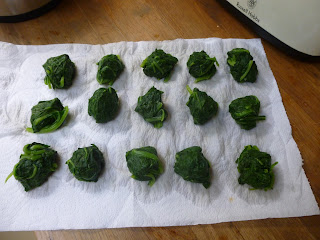 ... and then sat the spinach balls on some kitchen paper to drain even more. 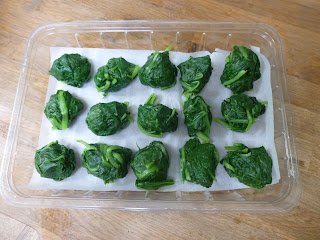 After a few minutes they were put onto a lined tray and put into the freezer to open freeze.  This only took a couple of hours and then they were put into a bag.  Next week hopefully a second batch will join them. 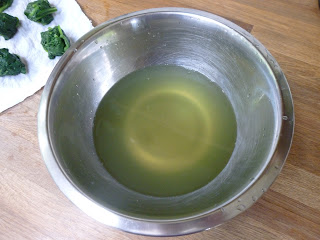 And all the juices left in the pan after cooking and in the bowl after squeezing the balls was used a vegetable stock.  I simply added a couple of handfuls of 'soup mix' with some extra lentils, brought it all to the boil and  simmered it for half an hour, and we had a big bowlful of Vegetable Broth each for lunch.