This morning saw us up bright and early, and after a quick slice of toast and a cup of coffee we were out on the hillside having a final tidy up of the trenches and holes dug for the base plates of the poly tunnel. It's been heavy going for lovely Hubby who has come across lots of huge boulders, annoyingly coinciding with the exact place the polytunnel uprights had to go.  Luckily my man is an engineer and has a brain that thinks inside, outside and all around the box. 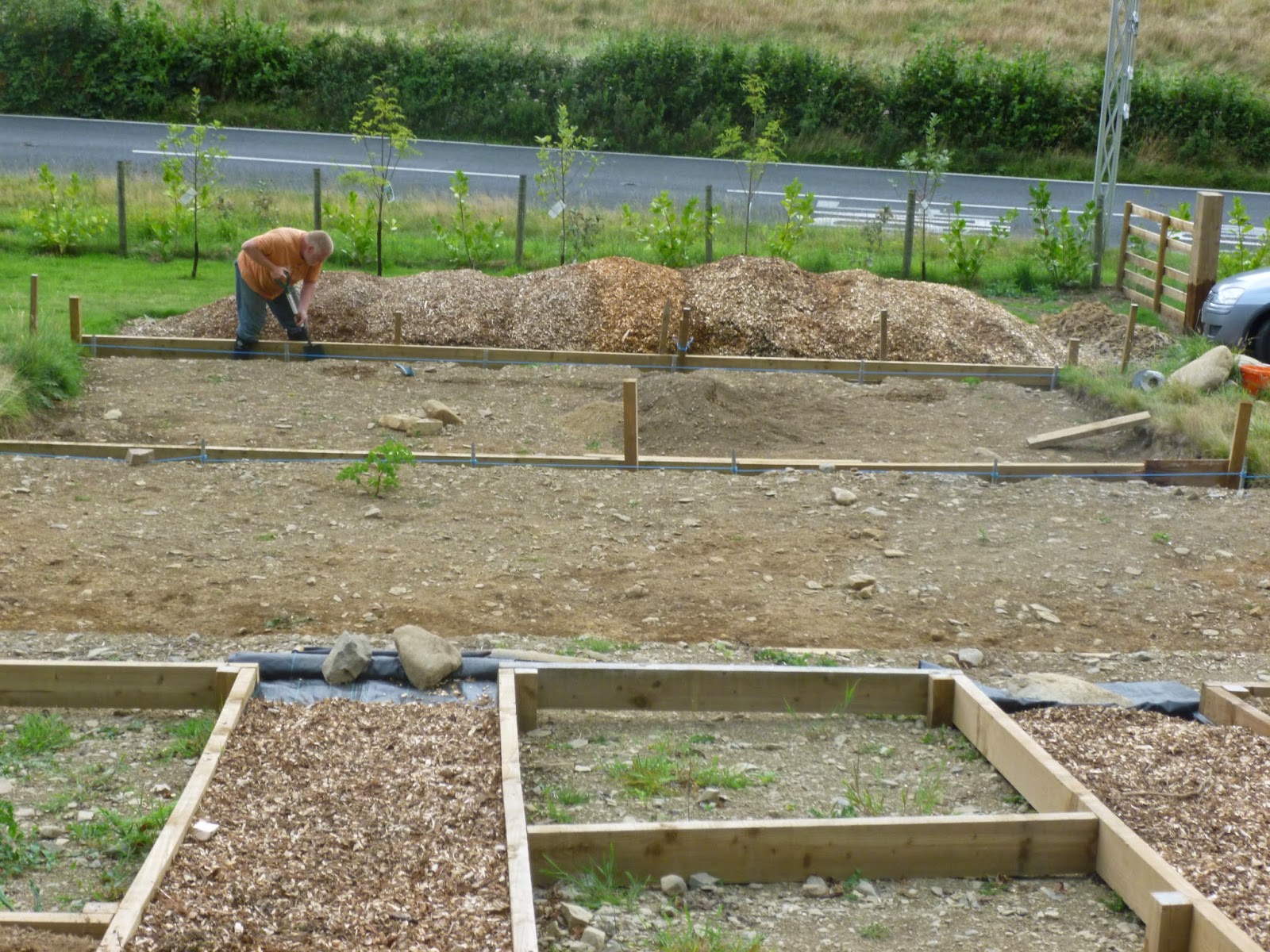 While he had a final tidy at the bottom of the hill I had a bit of a weeding session at the top of the hill. 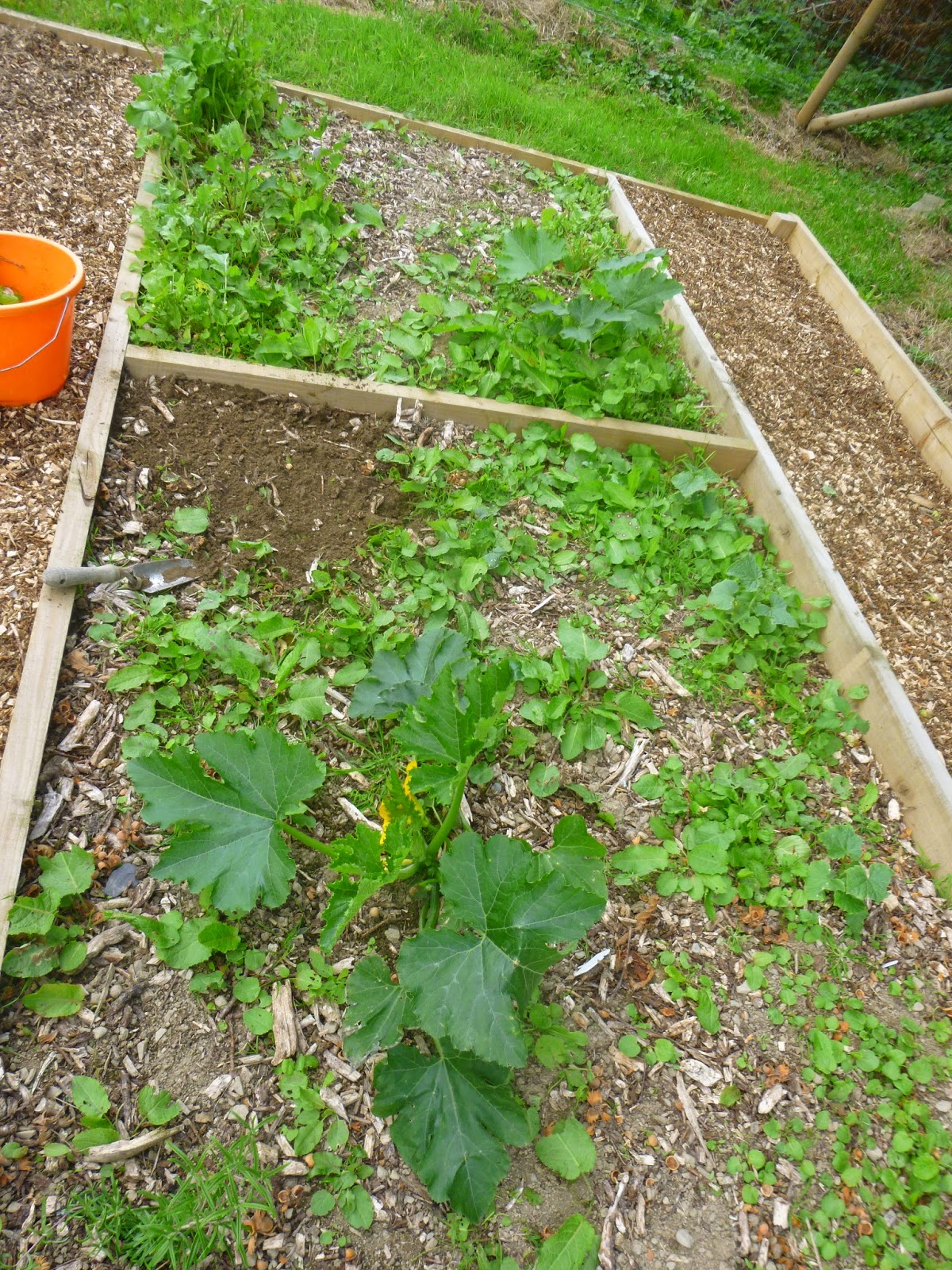 There are a couple of Courgette plant and some Cucumber plants in this bed and I had purposefully left the weeds to hide them from the rabbits.  Now the plants need to get all the sunshine they can get so I have weeded one bed and left the other to see if it makes any difference.
This year it's all been about being experimental rather than rushing to grow us food.  I now know that the time frame for outdoor Cucumbers does not work here on our hillside, even with the hot weather we have been having they have come to nothing, so next year they will all be grown in the polytunnel.  I also got the Courgette plants in much too late for them to grow well.  So it means early starts for everything in the future and lots of our food will be grown in the two tunnels rather than on the open hillside which I think instead will be used for tougher crops. 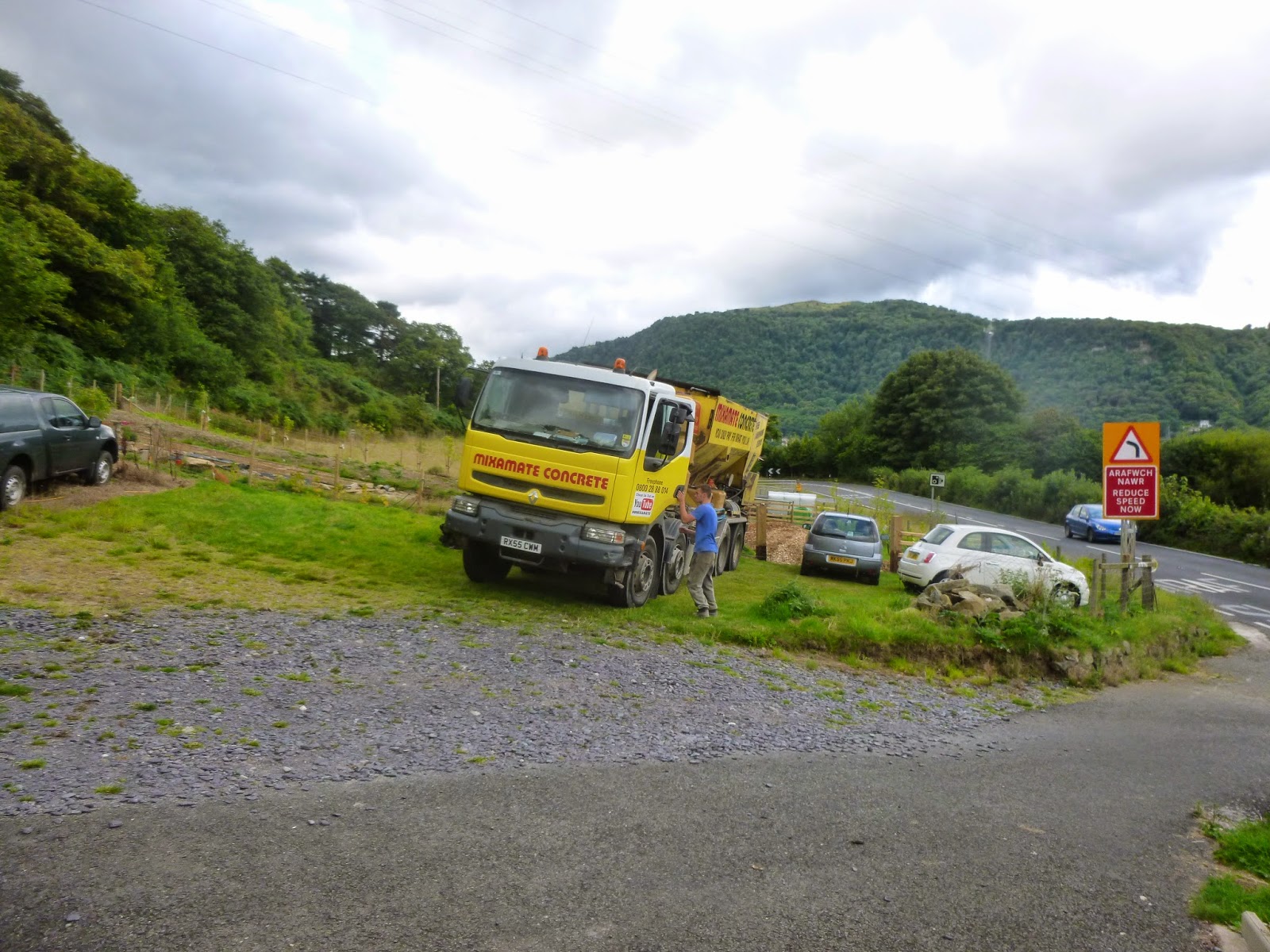 With one bed weeded and LH all ready for action the concrete truck arrived and after a false start because there was no fuel to power the mixer, we sprung into action.  (To get things going LH got some tubing and a bucket  from the shed and syphoned some diesel from the trucks main fuel tank into the mixer tank, while the guys stood back and watched.) 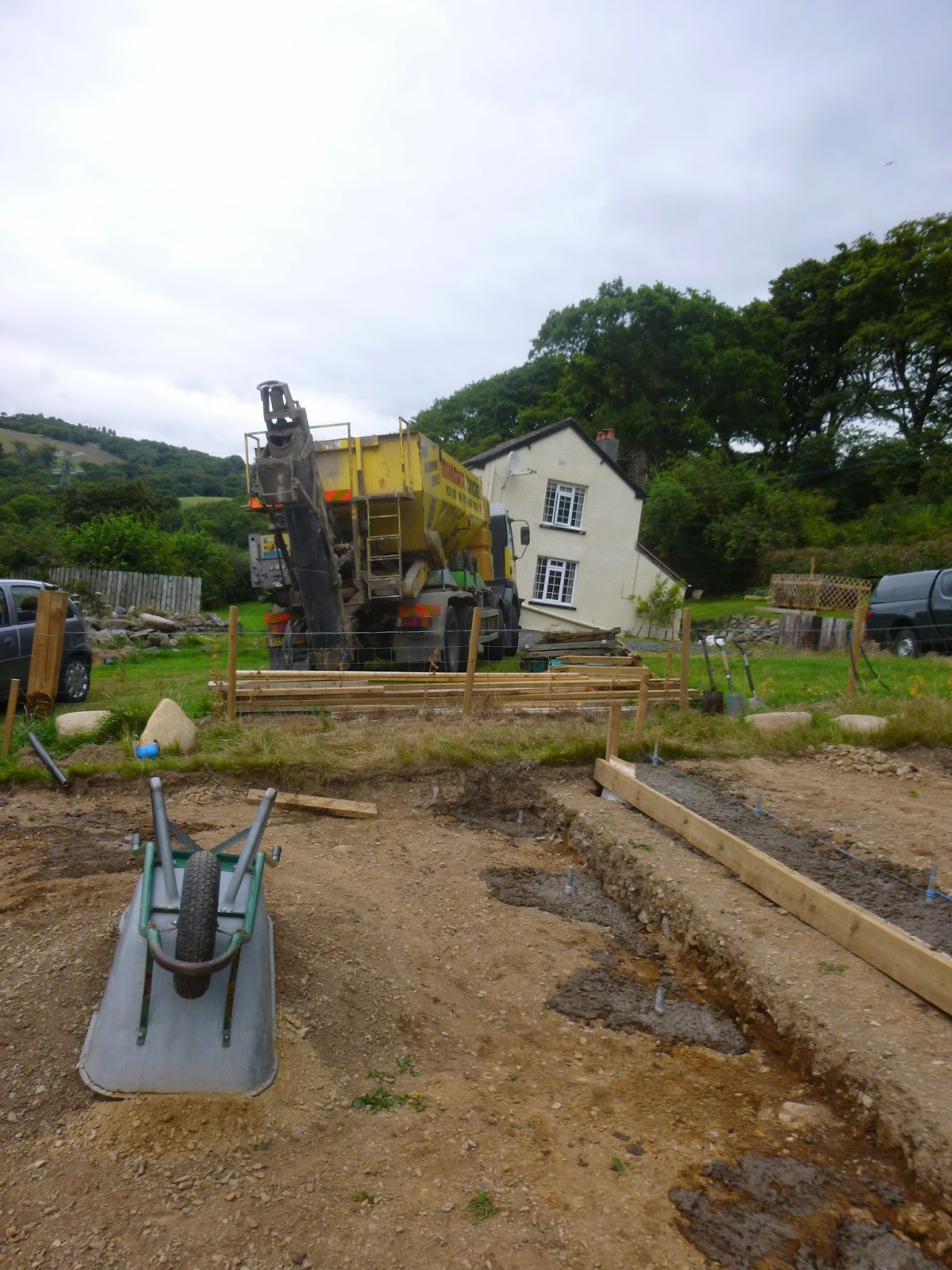 Once things were pouring freely we all got stuck in to barrowing and shovelling the cement into the trenches and holes, and filling them all in and making sure that the baseplates and their poles were in the exact positions needed. 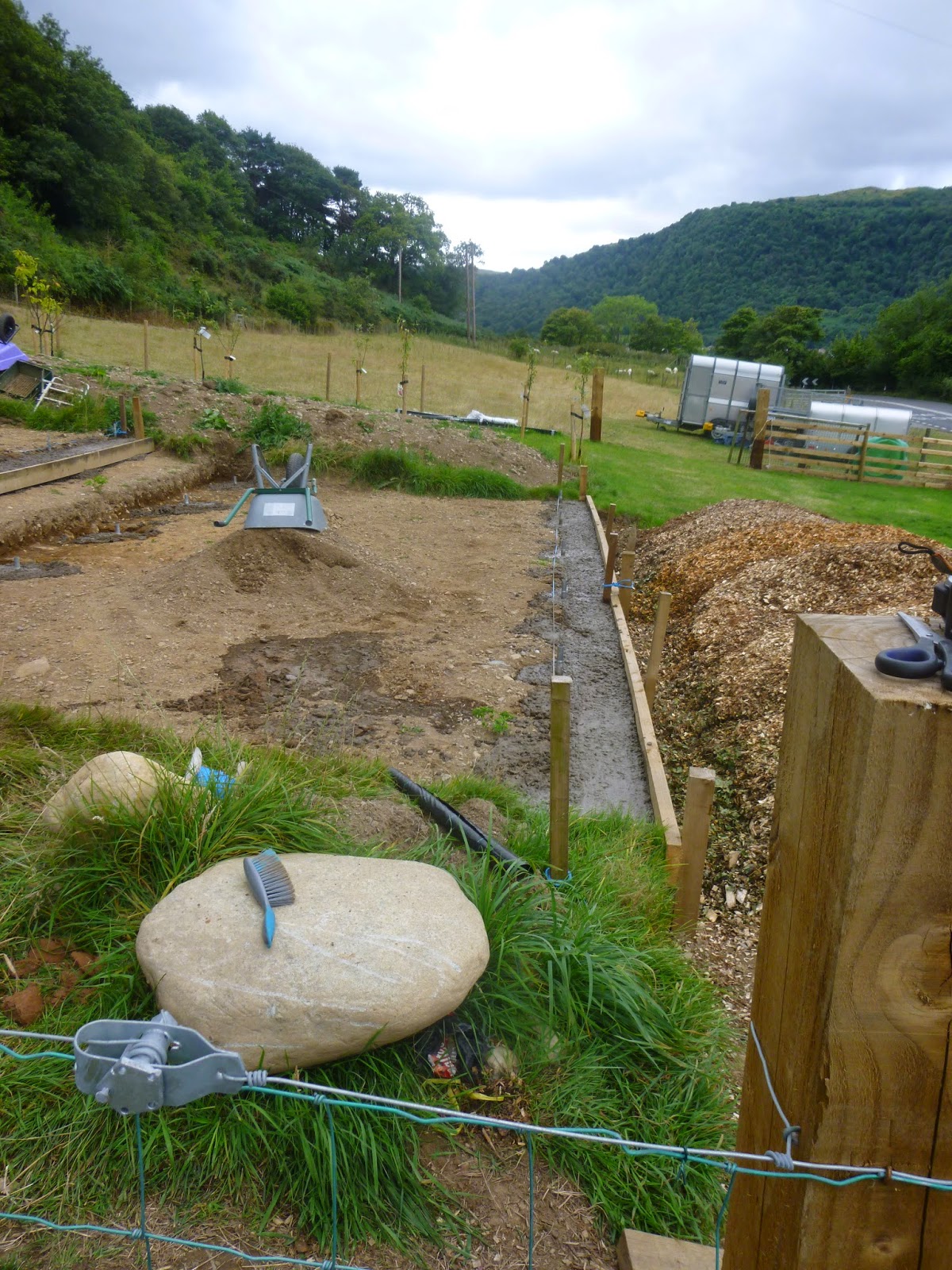 Just over an hour later we were done. 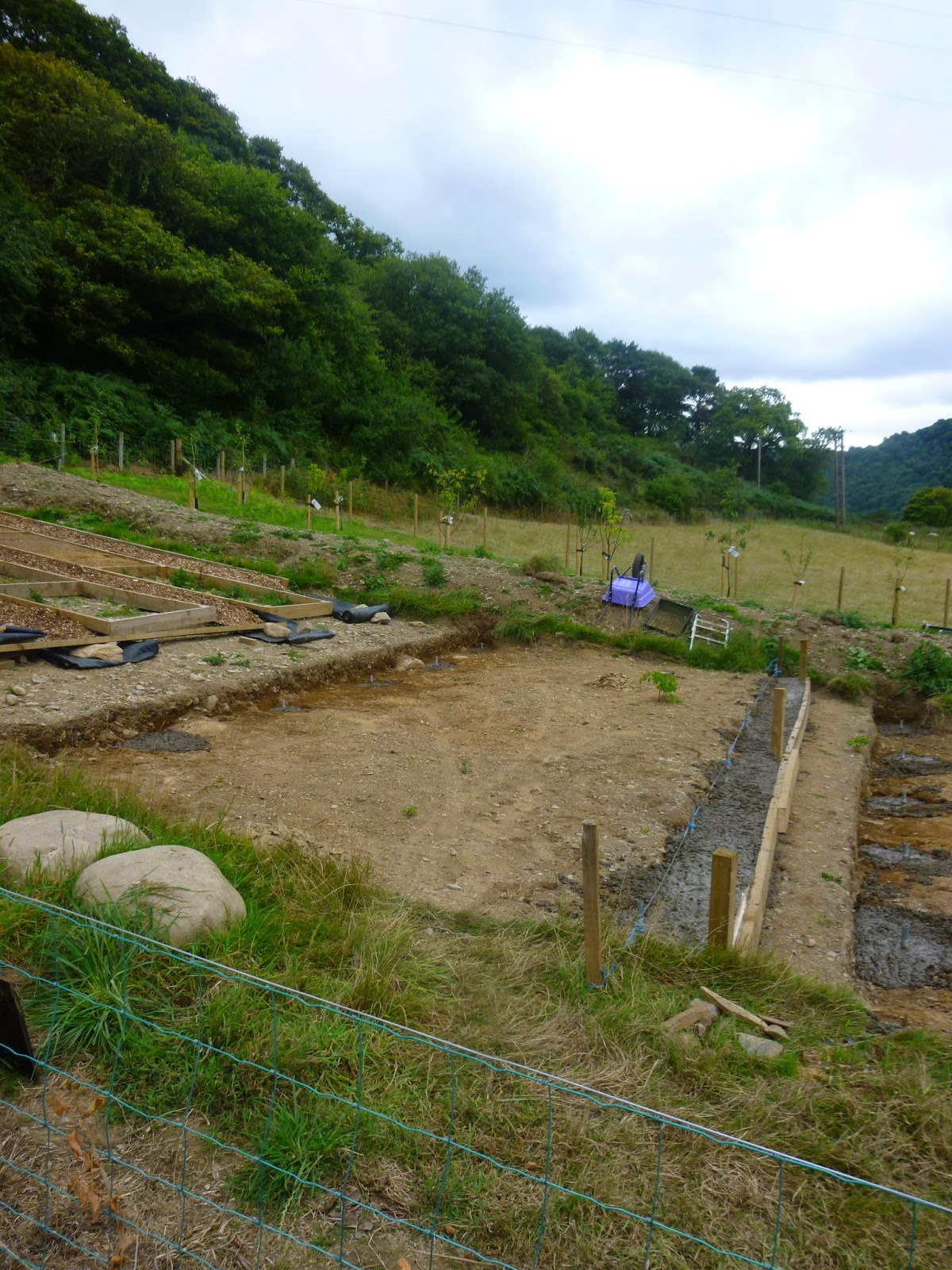 And all Lovely Hubby's efforts in getting the trenches so spot on were proved invaluable. 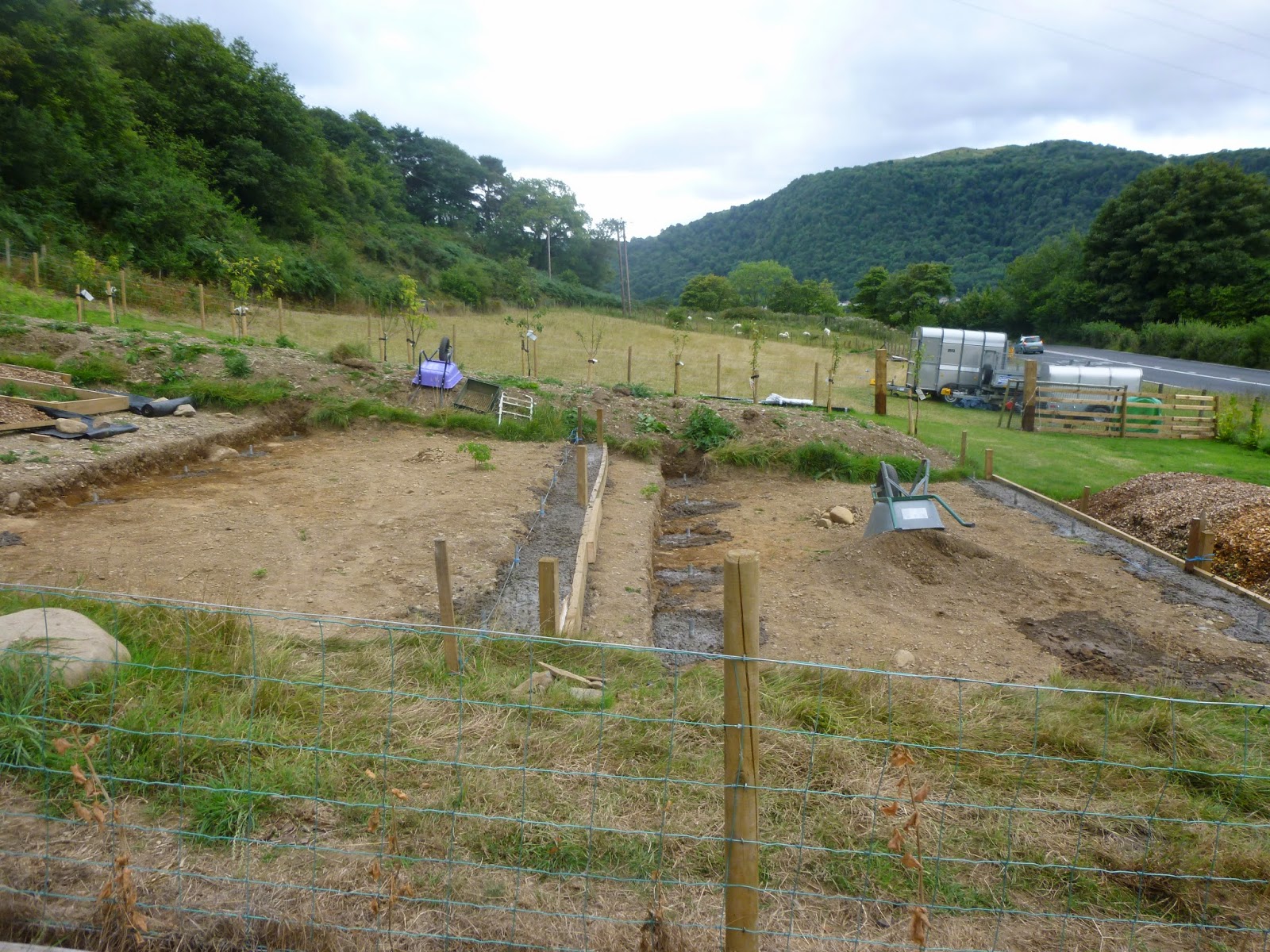 Now we just have to wait a day or so for it all to go off and then we can begin to put the framework of the polytunnel together.  Once this is done the raised beds for inside the tunnels will be built and the support for the work bench installed, then all that will be missing will be the polythene and the netting.
BUT .... we have decided to wait to get this in place as our driveway will shortly be turned into a building site as the foundations are laid for the garages and workshop and we have decided not to risk our tunnels being damaged whilst all this is going on.
Anyway at the moment we are another step closer to have a polytunnel again, I'm happy ... I see homegrown food on the horizon :-)
Sue xx