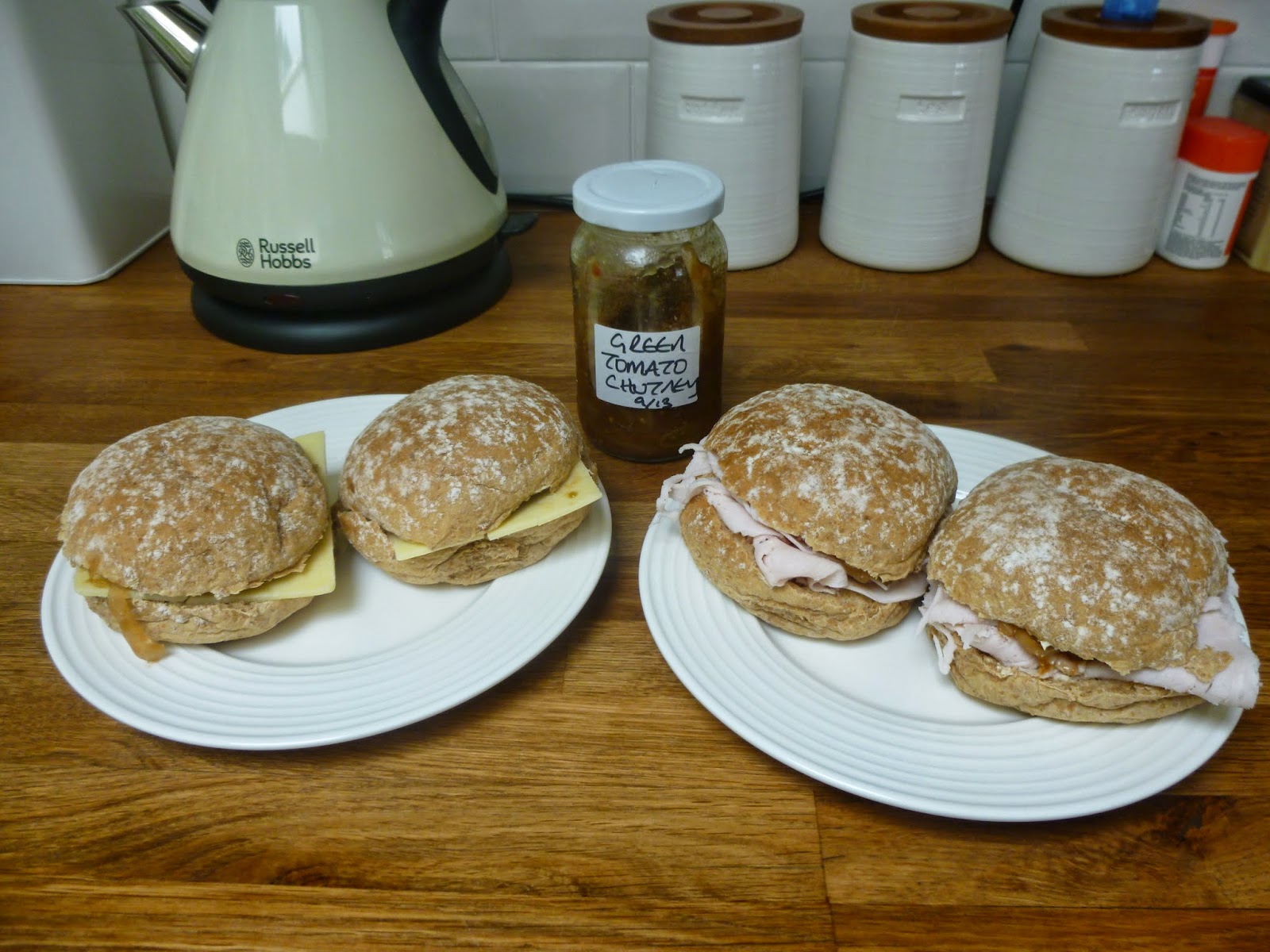 You'd think with No Spend/Low Spend September starting tomorrow I would have been out and about topping up supplies, filling the freezer with food to last us, making sure the cupboards were full to overflowing of foods to see us through ... but NO ... quite the opposite in fact.
I have already, without even thinking about it, been using up supplies.  Fishing in the cupboards for food I already have instead of dashing out and buying replacement things for items that we have used up.
This jar of homemade Green Tomato Chutney was taken from the cupboard, when the jar of onion marmalade in the fridge was finished off, and do you know what .... it is gorgeous!!   We ate it on buns from the freezer with sliced chicken for Lovely Hubby and sliced cheese for me.  We were slightly greedy having two each but we were hungry after a mornings barrowing and this set us up for an afternoon of even more work.
As you can just about make out on the label I made this in September of last year, and the time it has spent developing it's flavour tucked in the dark cool cupboard has mellowed it's taste wonderfully.  It's that mild, mellow and flavoursome it could be eaten on it's own, in fact I snook a cheeky spoonful straight from the jar ...... for test purposes you understand ;-)
(For the very easy and basic recipe look at the recipe page at the top of the Blog.)
So starting tomorrow .....  a month long food fest of use it up and wear it out.
Seeing if I can run down food supplies enough to be able to turn off the large chest freezer (we have to ..... the roof could be coming off the conservatory in the next couple of months!). reading the books and magazines I have instead of buying more, and digging out last Winters clothes to see if I can get away with not spending a penny on clothes for the foreseeable future.
Join me for No Spend/Low Spend September either just reading about what I'm up to or having a go yourself, in whatever form you decide to do.  There's something appearing on the horizon that takes up a lot of some folk's money, and not spending for a whole month could start some serious saving towards that.
Don't shoot me .... Lovely Hubby raised the dreaded 'Christmas' word before I did ... honest!!
Sue xx
Posted by Sue at 08:00