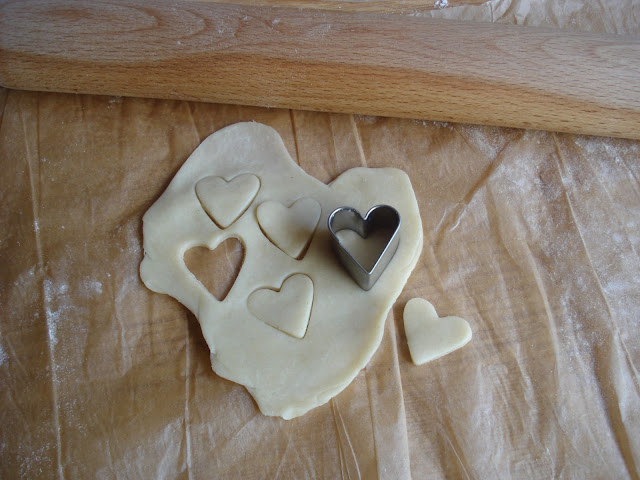 Somehow the more food I think I'm using up to empty the freezer, the fuller it actually becomes !
﻿ 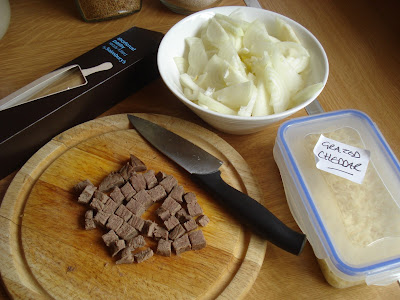 Wondering what to cook for tea the other night, (yes menu planning seems to have gone right out of the window, I must get organised again), I decided to use up half a slice of steak that I had sneaked from Lovely Hubby's portion the night before.  I knew I had some ready rolled pastry in the freezer that I bought when it was on offer simply yonks ago, so I thought a couple of pies would be a nice easy option after a day spent sorting and tidying. 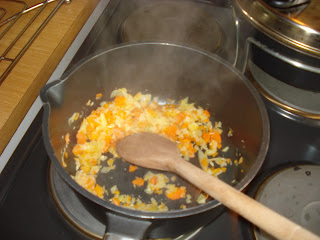 I dug out a tub of Veg Hash from the freezer to give me a good tasting base and then added a  couple of sliced onions to it and let it all sit simmering away nicely for a good twenty minutes, this really makes the onions taste delicious and gives it a real depth of flavour.  The plan was to turn half into Steak and Onion pies and half into Cheese and Onion for me. 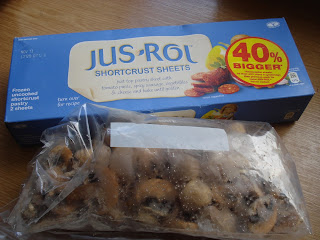 Then I remembered a bag of mushrooms also lurking in the depths of the freezer and these were fetched to be added to the Steak and Onion pies, as I spotted another half pack of pastry next to them and realising that I would have much more filling with the added mushroom I decided to go for it and do a few extra pies. 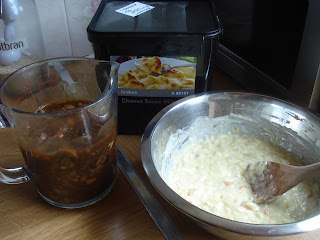 With a half pint of Oxo gravy granules mixed up nice and thick the frozen mushrooms were dropped in and soon thawed out.  I tipped in half of the Veg Hash/Onion mix and gave it all a good stir.
For the Cheese and Onion pies I decided to give one of the humungous Cheese Sauce mixes I got from Approved Foods last week a go.  It's in industrial quantities on the tub so I quartered the measurements and wrote a sticker for the lid, so I'll know next time, maths is so not my strong point, I think my brainy brother inherited all the mathematical brainy bits and left me with the green fingers, not a bad split up of the family genes.
Then I left the fillings to cool down while I rolled out the pastry.  The second box of ready rolled pastry I had unearthed had obviously been in the freezer for a looooooong time and the single sheet of pastry that was left in there was brittle and broken in lots of places, so I simply waited for the pieces to thaw out and then moulded them into a ball and rolled out and it was as good as new. 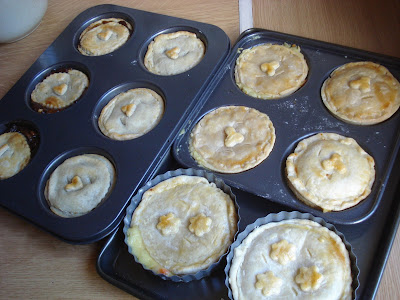 Soon there were 6 Steak, Onion and Mushroom pies and 6 Cheese and Onion pies smelling absolutely gorgeous cooling down on the worktop.  They're so pale because I sort of two thirds cook them straight away and then I finish them off when I use them from the freezer, we both like our pastry quite pale and crisp and this seems to work a treat.  I let them mostly thaw out and then cook them for about 20 minutes when I get them out of the freezer next time, or they can be cooked from frozen for about 30-35 minutes. 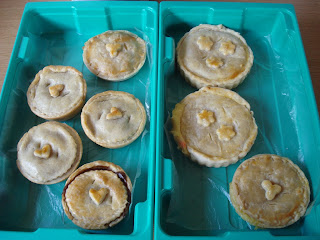 After having two each with a little bit of salad and a spot of Oxo gravy the rest were open frozen in the freezer and then placed in a large box so they don't get damaged.
So that was two packs of pastry, cheese and mushrooms out of the freezer and a big box of pies back into it ... no wonder it doesn't seem to be emptying !!
By the way the little hearts on the pies are to let me know which ones are Lovely Hubby's (and because I love him), and so I didn't feel left out, I cut myself some little flower shapes for mine.  Well it's better than wasting the pastry and I didn't have any room left in the oven for any jam tarts :-)
Sue xx