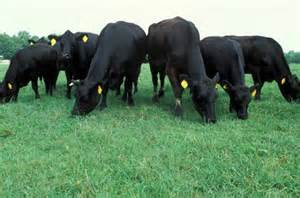 This picture from Google Images.
Well this post was going to be about the first lot of shopping I got towards our little holiday at the end of this week and our big decision to have £80 of the money for food and drink, a really big decision for folks that are currently spending as little as possible on food.  But we decided what the heck, it's time for a treat and this holiday weekend is so outside the boundaries of our £2 House Keeping Challenge we may as well go for it BIG style.
But ...... then the cow escaped!!
Yep, you're right we don't keep cows!!
In the paddock on the opposite side of our drive, owned by our neighbours are a lovely group of eight black cows (Lovely Hubby was telling me they were boys.....now I know I'm right, they are mostly definitely girls ... I've up close and personal!) they belong to a farmer who lives way down nearer to the village.
Yesterday after cleaning out the henhouse I turned round to be confronted with a very interested cow looking over the chicken fence to see what this rather large rear end was doing poking out from a chicken house door.  She bellowed in the most fetching way as I did the most comedy double-take ever!!
Well lots of phone calls later, as our neighbour was out (waiting to pick his wife up from work and go to the opera no less), including a desperate plea to LH to finish work at 5pm instead of 6pm, one of the other ex neighbours turned up, closely followed by LH and then finally the farmer who owned this magnificent cow.  By this time of course she had gone through our fence and into the woods, much scuffling and bellowing could be heard as she decided that she much preferred our paddock and the tasty apple trees, and attempted an about turn through rather than round the bushes.
With all of us stood in gaps and looking as big as we possibly could to fill these gaps, (easily done, the diet starts next week folks) we managed to get her on the drive, with the farmer and his brother driving her towards the road and LH running manfully through the field to open the gate we thought the adventure was over, but for a brief bit of dramatic licence the other seven cows in the field were making for the now open gate faster than the lone cow was being driven down the road.  But just as their noses were out of the gate, their sister appeared and they turned and walked meekly back into the field.
And how had she escaped ....... through a kissing gate!!
She had lifted it off it's broken and wobbly hinges and stepped through the gap.  Our neighbour has now asked the farmer to remove the cows from the field as they have eaten our landlords trees over the fence and now had this escape and broke the gate, and he can no longer stand the hassle of wondering what they are about to do next. 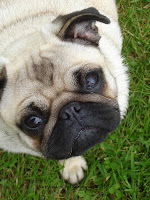 I'll miss their lovely velvety faces watching us as we walk along the drive for the post, but someone will miss them more than me - little Suky the Pug!!   The first time she saw them she fell in love, they stood face to face as each one introduced themselves to her and when they started pulling clumps of long grass to chew she followed suit, eager to do what these new friends were doing.  She thought all her prayers had been answered yesterday when one of her friends came to visit, and will be so sad when they all vanish. 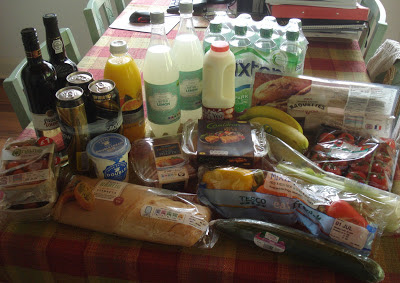 Oh and the food we've bought up to now, a bottle of Port, a bottle of wine, 3 pint cans of cider (reduced from £5 to £3 in the whoopsie department) and some other bits and pieces, and I 've spent just under £40.  A few more things need buying that will bring this up to £50 and then the other £30 will be for food and drink while we are away, a coffee of two at the services and maybe some fish and chips one night.  Then we have £50 a day for spends.  It's all in cash, so there will be no flashing of the plastic on this mini holiday, we will stay in our budget, which to us seems positively luxurious. 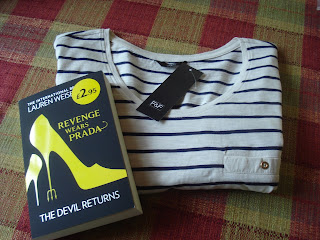 I even used a bit of my personal spending money to do what is traditional and bought myself a new t shirt and a book to read.  I don't usually do this but this t shirt caught my attention as I walked past and I just love the simple stripes and for £6 it would have been rude to say no :-)
Added in - our neighbour has just knocked and said one cow is missing again, so I better keep my eyes open while I'm out and about, she obviously enjoyed her day of freedom so much yesterday she's decided to repeat it !!
Sue xx
Posted by Sue at 10:50