Looking at things from a different perspective..... 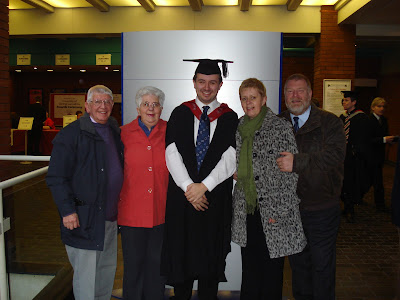 It's a very sad and hard time for us all at the moment, but sometimes it pays to look at things from a different perspective.  Yes we're losing Dad.......but we had him!  While we have him we need to let him know that he made us so proud, of all he accomplished and all that he gave, mostly that he was the man he was.  And we in turn made HIM proud.
The photo at the tops was Jasons' graduation day when he got his Masters Degree, Mum and Dad were so very proud of him that day.  All of us were, we all helped him through his years at University and he worked so hard to get his two degrees, it was fantastic to be there to help him celebrate that time. 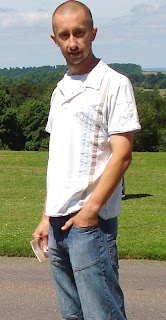 Simon made his Grandad proud in a very different way.  He was the first younger member of the family to join the Army.  He served his country well, in many war torn areas and bravely took part in the Iraq war.  We were lucky we got him back, although the war took it's toll.  Writing to him while he was overseas, occasionally speaking on the phone, sending him parcels and keeping in touch brought back many memories for Dad.  And when Simon finally came home there were many army chats with his Grandad.  Sad chats and happy chats, he gave his Grandad the chance to discuss his National Service times and the things that only fellow soldiers can talk about. 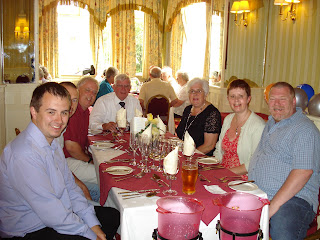 We very proudly all went on holiday to celebrate the great achievement of their 50th wedding anniversary, happy times with presents and balloons at the table in a hotel in Scarborough.  A week spent together forged tighter bonds with his two beloved grandsons. 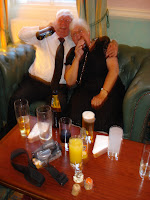 And a few drinks were consumed with much laughter in the evenings.  Even the photo is blurred....hic!!
But the proudest day of all..... 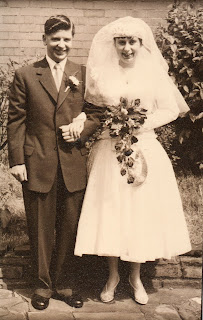 ... was the day he made an honest woman of my lovely Mum. June 13th 1959 the day our family began, such a special day.
So today I'm trying hard not to be sad, I'm trying to think of what we wouldn't have had without my Dad.  I'll be back in Manchester to spend time with him tomorrow, and let him in on the very widely spread secret that I am a very proud daughter.
Sue xx
Posted by Sue at 09:28