Last night when Lovely Hubby went out to close up the henhouses, he had a bit of a shock (understatement of the year).  The girls in house number one were squawking and leaping out the door, sat in the back corner trying to pin one down was Mr Fox, LH quickly got all the girls out and shut the fox into the house.  He banged on the window and shouted for me to get his gun, I did and the nasty fox that has been terrorising my girls over the past couple of weeks is now a goner.
Then we had the task of finding the now dispersed chickens in the pitch black with only one working torch and the rain pouring down.  Looking under the vehicles and shining the torch under every tree and bush  meant we found around nine or ten more of the chickens who had run for their lives, one was hiding under the cowavan with Toby the black cat.  Others we hoped were somewhere safe as we had found no bodies.
This morning at first light we heard the crowing of one of the young cockerels in the raised beds at the back of the house and then from the little bank of trees behind the house came a steady stream of  hens, looking non to worse for wear for their night of camping in the 'forest'.  After a head count, a search around, and finding no piles of feathers we sadly guessed that we had lost just two of the young cockerels to the fox, but we guessed wrong!!
Rosy, the Jack Russell was frantically pawing at the hollow tree to the front of the house, so LH went and shone his torch into the opening and there lying low and waiting for his Mum was a young badger and next to him, a pile of grey feathers.  Obviously they had taken advantage of the boys who had unfortunately chose the wrong place to try and roost for the night.

We have no problem with nature and I'm glad in a way that the badgers slept with full tummies last night, although I will miss my lovely little  Lavender Pekin boys. The Badgers will not be shot or harmed, their location will be kept secret and, as they hunt at night when my chickens are usually tucked up safe and sound, the two should be able to live in harmony with a bit of extra care for the birds from us. 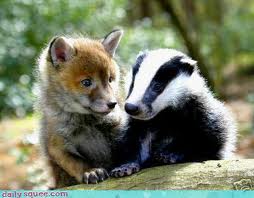 We're both sad in a way at the death of the fox he was a magnificent looking animal, but he had been picking off my birds one by one, living wild and had had a pretty good life looking at the condition of him, but when you take on the responsibilty of looking after chickens you have a duty of care to protect them from predators, and I'm so very glad that my brave man was there to do just that.
We expect no eggs today as the birds from house number one are completely traumatised.  But thanks to Lovely Hubby they live to lay another day.

(All photos from Google Images)
Sue xx
Posted by Sue at 10:38