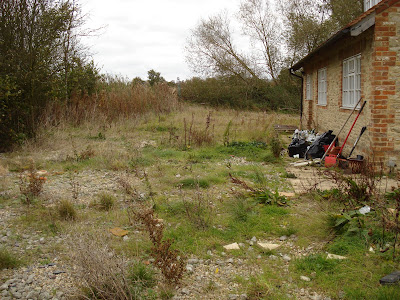 January 2009 When we moved onto the farm in January 2009 the back of the house was full of rubble, covered over with a layer of stones and weeds, designed primarily for parking on. We never really saw the point of driving round the house to park, so it was always our plan to use it for something else. 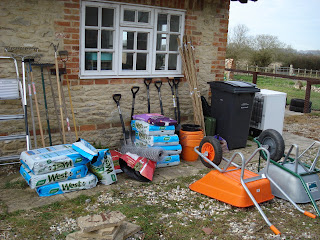 March 2009
By March we had made the house comfortable, and things outside had warmed up enough for us to start work on the outside. Many supplies had to be bought, as we had come from a town house with only a little patio/yard at the back, so we owned only trowels and a couple of pots.
# 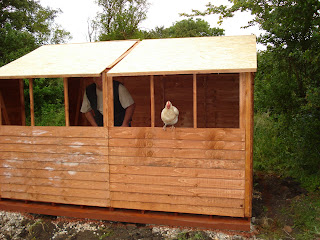 June 2009
Of course Lovely Hubby needed a shed......doesn't every man!! He actually does nothing in it, he works in the barn, but we store all the animal feed in galvanised bins in it now.
# 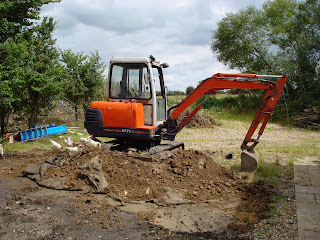 August 2009
By August we decided we were getting to far behind with our plans for the back, so we paid a friend with his little digger to come and scrape away the stones and leave us a level surface.
# 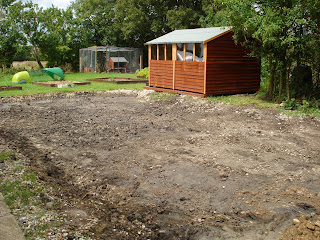 August 2009
What would have taken us weeks digging by hand was done in a matter of two afternoons. 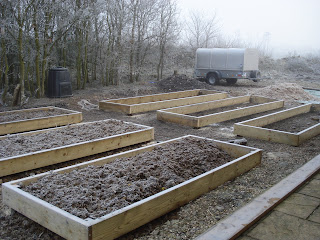 January 2010
Then other matters were more important so the work was temporarily put on hold. By January 2010 LH had put in the first of the raised beds. Six beds which we filled with manure and left to settle. Then came the hard frosts and snow. With the earth too hard to work with and the ice too thick we once again abandoned work. 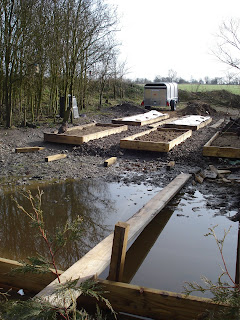 March 2010
As soon as the thaw came we got back to work, waiting for the water to drain away we discovered the land was below the level of the water table at the shed side so we had to infill with rubble before we could think of putting in the last three beds. 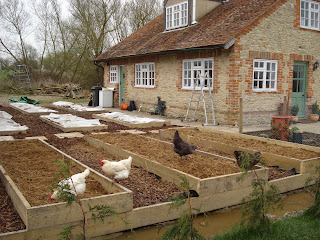 April 2010
Once the last three beds were in, it looked as though we had a stream running alongside, the water was still that deep. All the beds now had manure in them, and the first six were then filled up with top soil and left to settle.
# 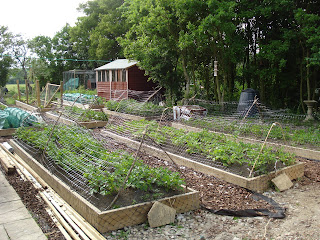 May 2010 - today.
Next stage was to begin planting, first in were the potatoes, Earlies, Second Earlies and a bed of Main Crop. All the other veggies were added as soon as the weather warmed up, stage by stage, we still had occasional frosts at night up until the week before last, so we had to be careful. 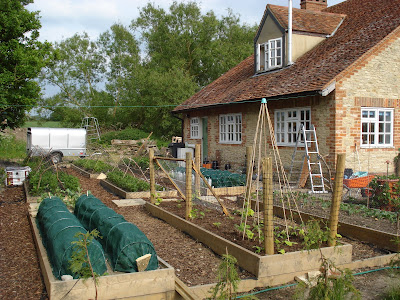 May 2010 - today.
#
This week saw the last bed being filled and now the Kitchen Garden looks like this.
#
A big job done over the course of more than a year but a worthwhile one. It's nice to look back on the photos and see just how far we've come.
Lots of yummy times ahead - hopefully!!
Sue xx
Posted by Sue at 17:38