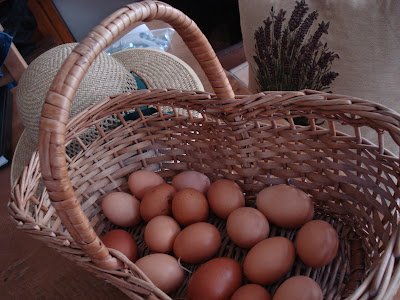 The new girls have settled in well, the lovely little Lavender Pekins are running around chirping away and cuddling up in a huddle every hour or so for a nap, they are only babies after all, just 7 weeks old. It's hard to resist picking them up every time we pass the Eglu, but we are trying.
The Rhode Islanders are running around being bossy, but the older girls are having none of it and the Speckledys are standing their corner and showing that, no, they are the bosses!! It's like chicken wars at times, but they will all sort themselves out in the end.
Last night I went to close up the houses at dusk and there were only 4 of the new girls in their house, two were runnning around outside, so where were the other 6? Up in the trees....that's where!
So, there I was broom in hand moving chickens from branch to henhouse one by one, with rain running down my neck and Lovely Hubby standing at the back door (he had just got out of the bath) laughing his head off. All was going well until the last one, and did that one want to be caught....did she hell!
I followed her, I headed her off, Rosy tried to help but complicated things no end. It took three quarters of an hour in the rapidly fading light with the rain getting heavier and heavier before I finally got her. She did at least has the grace to go calmly and quietly straight to her perch. 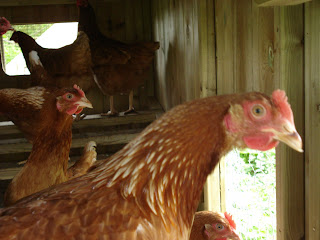 And I went to mine, with a nice cold cider in front of a roaring fire watching television for the rest of the evening. (And no LH didn't get a telling off for laughing, because when I finally got in I couldn't stop laughing either, if only I had the photos to show!)