Neglected blog...but a puppy getting lots of attention!! 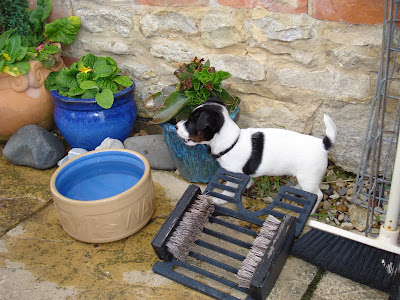 I've been told off by my Mum, she arrived on Sunday (with Dad) and rushed to greet the sturdy little dog she thought I had. I think I forgot to mention the sturdy little Jack Russell/Miniature Pippin cross is actually only six inches tall on her little tippy toes!!
The photo on the last post (my Mum says) makes her look big and sturdy. I keep trying to get her to pose next to things that will give a true perspective (the puppy that is, not my Mum), but you know puppies, by the time you have clicked the camera she isn't even in the shot anymore!!
She's settling in well and joined in on the walk this morning with Sophie and Archie, although she had to be carried for two thirds of it as the wet grass was bigger than her. 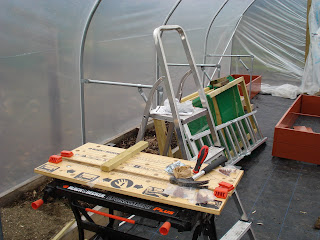 Progress is being made on the polytunnel now that I have a little band of helpers, the raised beds were assembled on Monday and most of them filled in yesterday morning before I jetted off to do my stint at the charity shop. Tuesday saw us all going to the Farmers Market in Aylesbury and a lovely day it was too, although fighting with a tarpaulin on a breezy day makes for a stressful start! 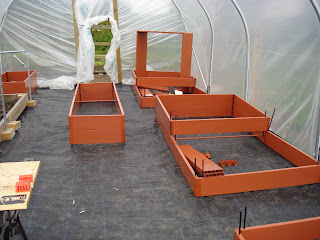 Today we are dependent on the weather, it's beginning to look quite promising with the sun peeking her face out from between the greyish clouds, there is blue sky in the distance and therefore hope for the onions that will be again freed from their blanket of weeds. 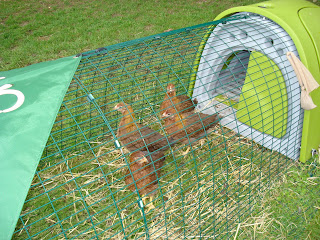 The new chicks Nutmeg, Bourneville, Fudge and Coco have settled in well, last night they had their first taste of freedom. We decided to let them out of their run an hour before dusk so they could have a quick explore before bedtime. It worked brilliantly and they tucked up themselves safely in bed in their little Eglu as soon as it went dark like the good little chickens they are. Today they are having their first full day of freedom, being bossed about by the Big Girls and rounded up on a regular basis by Sophie, could be quite a stressful day for them!! 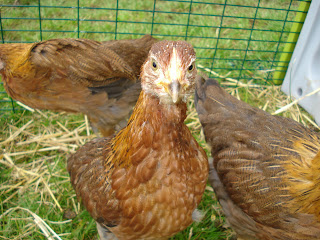