Tidying for Winter ... and Potato and Onion Soup 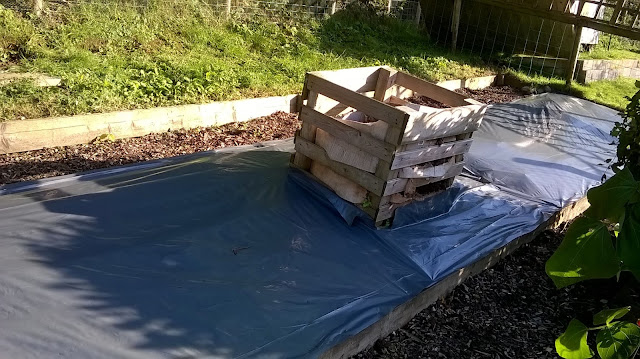 Alan is in the process of tidying up around the raised beds on the vegetable patch and emptying some of the beds ready for putting them to bed for the Winter.  The four beds highest on the hill just a few potatoes left to harvest so he started off by digging them up, then after a good weeding the beds were covered in black plastic which he stapled round the edges to try and stop the wind lifting it.

These beds are going to be the asparagus and rhubarb beds for next year, two of each, so we want as much goodness as possible kept in the soil and not washed down the hillside with the huge amount of rain we get here every Winter.  That is also the reason for keeping the little compost bin in place for now so it can carry on feeding the soil.  The rhubarb will be transplanted through slits in the plastic in a couple of weeks when it goes dormant.  That way, hopefully, next year we will have a lot less weeding to do :-) 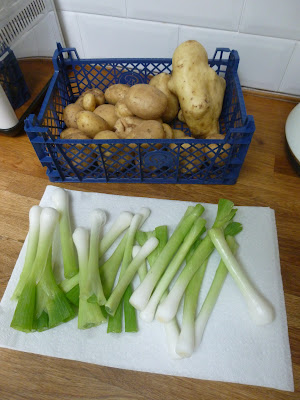 I brought the potatoes he dug up into the house, after he had very kindly washed them for me, and added a couple of handfuls of my huge spring onions from the polytunnel to them. 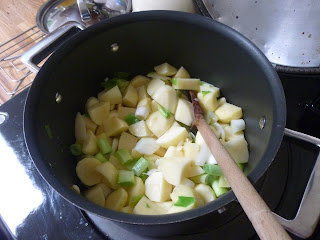 They were sautéed in olive oil along with some garlic, a sprinkle of chilli flakes and a couple of sticks of celery, before I added lots of vegetable stock.  Then it was all brought to the boil and left to simmer long and slow in the bottom oven of the Aga while we went out for a few hours. 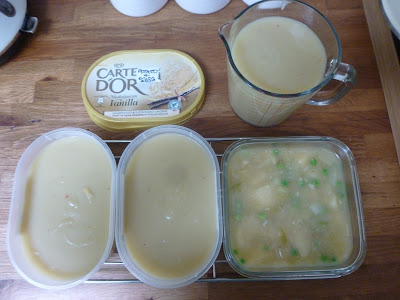 Once home it was whizzed up with my stick blender and portioned out.  A jug full that we had for lunch today.  The glass bowl of soup that has been left chunky and has added peas, is for Alan's lunch tomorrow while I am in Manchester for the day, and the two two portion tubs are now safely stashed in the freezer for future use.

I have to dash now as it's time to deal with a vast amount of beans he has just harvested.  It's hard work this putting the hillside to bed lark .... I'll be ready for mine before he's finished at this rate.