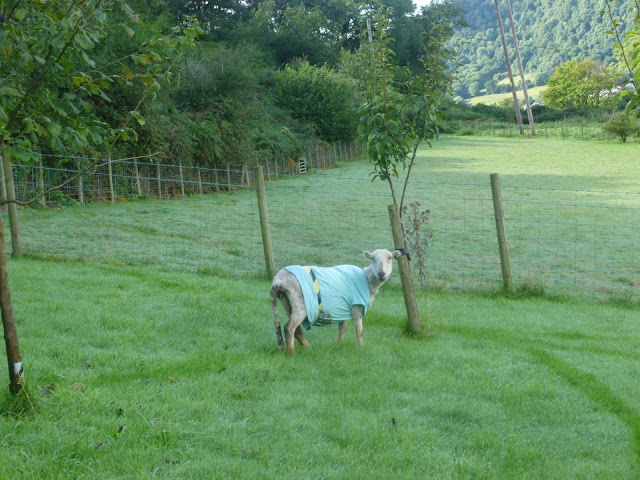 Is this the best dressed sheep on a Welsh hillside .... well we think so  :-) 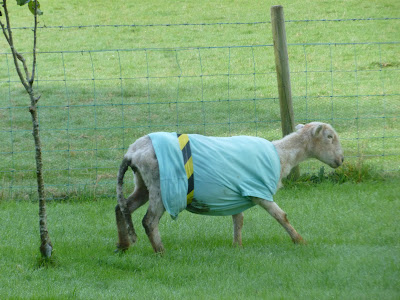 After speaking to the vet yesterday our course of treatment for this sad looking sheep is the best and only one open to her, so we were advised to continue to spray her with the antiseptic spray which is suitable for animals.

We were discussing her after the phone call and both agreed it was a shame she was nibbling at her scabs as soon as they form.  Alan said we should put a cone over her head the way the vets do for dogs after an operation so they don't nibble at their stitches, I said not to be so cruel we don't even do that for the dogs, we always get them a little t shirt to wear instead and it has always done the trick.

We looked at each other with grins on our faces!!

In Llandudno a few hours later, we called into one of the charity shops and stood debating what size our foster sheep could possibly be .... we guessed a medium.  Later it took us only a few minutes to catch her, check and re-spray her sore side and then get her dressed, adding the snazzy band of tape so the t shirt doesn't dangle and risk tripping her up or get wet when she 'spends a penny'. 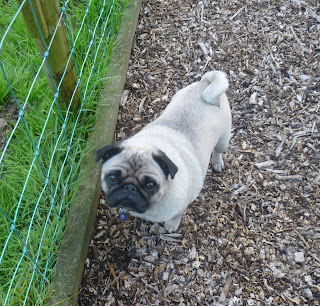 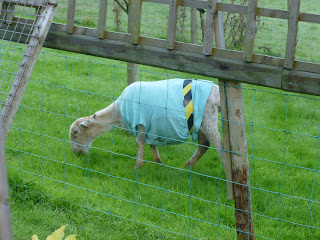 And the sheep appears to quite like her new attire, and is not even slightly bothered by the fact that she is now fully clothed   :-) 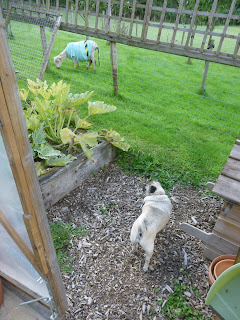 We moved the sheep into the Orchard as the grass there is in brilliant condition, and she needs all the nourishment she can get.

Instead of watching me working in the polytunnel earlier ... Suky was on sheep watching duty, she just can't get over the now dressed sheep living just through the fence