We Did Do SOME Work - Honest!! 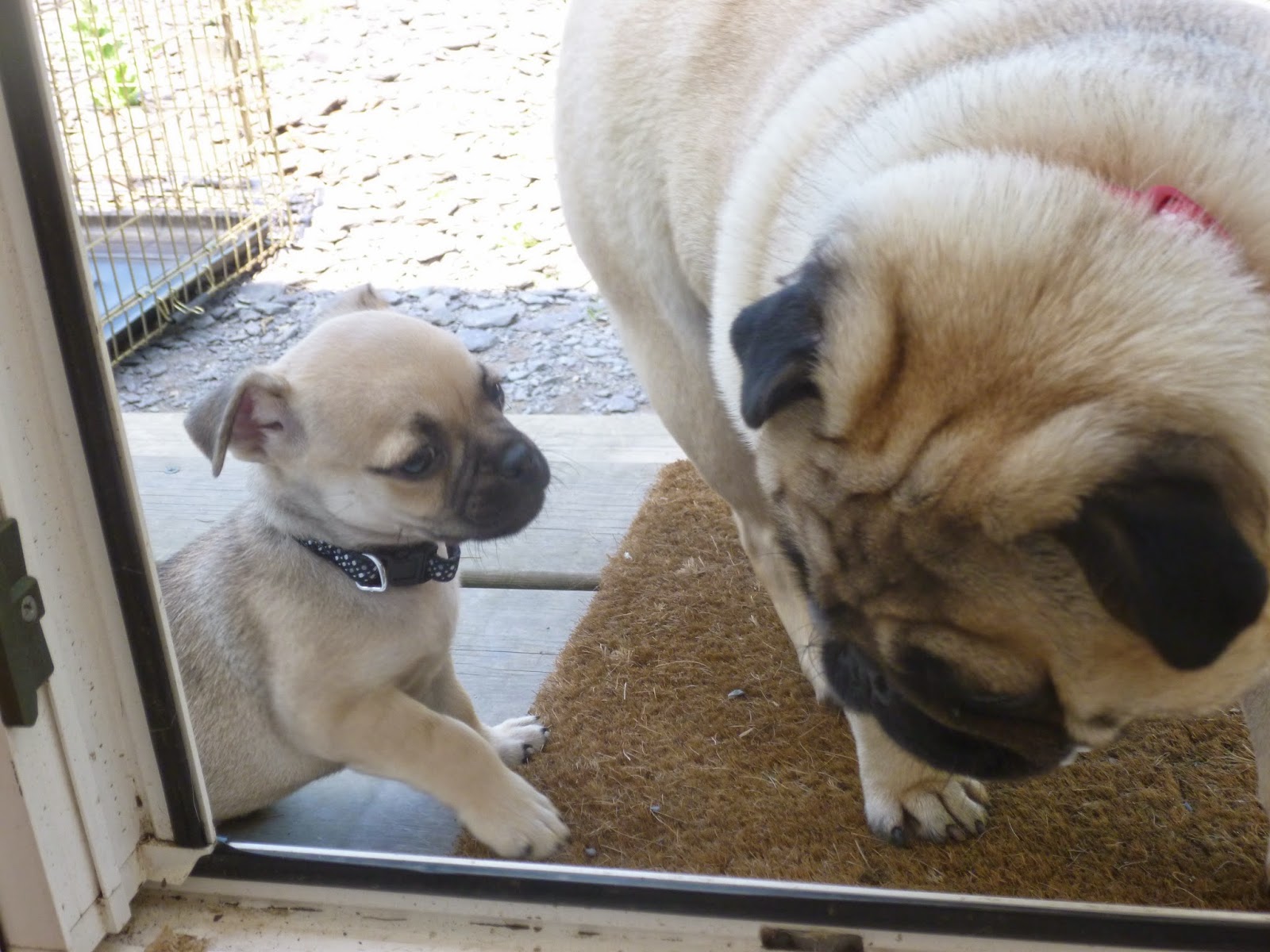 We did do some work over the weekend - honest.
The shots of what we did do are mostly in the camera but are more evident looking around the place.  Grass was mown and strimmed.  Chicken World especially got a good manicure.  Chickens prefer shorter grass, we tend to let it get a bit longer and only mow it a couple of times rather than once a fortnight like the rest of the grass near the house this way it doesn't all vanish under lots of little chicken feet and pecks.
The chippings that were piled up at the bottom of the hill have been barrowed up the hill by Lovely Hubby and laid on top of membrane to form nice deep paths.  As it settles down the levels will lower and the chippings compact more.  And we rounded the weekend off with a bonfire, burning all debris and rubbish from around the place.  Everywhere looks nice and tidy now. 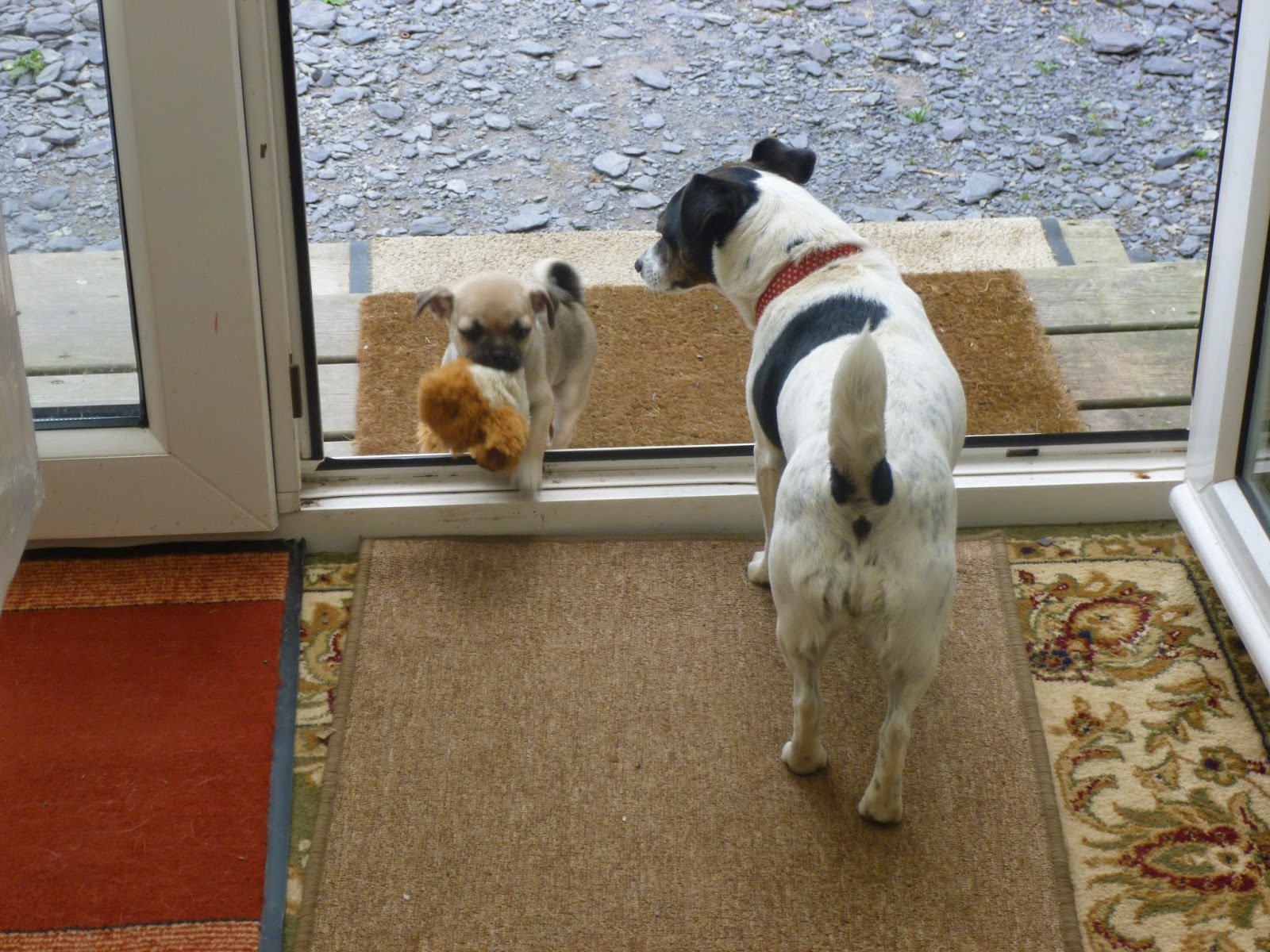 But to be really honest our work was very punctuated with a certain little madam.  We obviously had to keep an eye on how the other animals were reacting to her.  Suky has lots of patience and will pretty much let Charley do as she pleases, Rosy is holding herself up as top dog, and letting little one know how far she will let her go before she will get a growl and a threatening show of teeth.
Luckily Charley has taken this on board and today she is showing a lot more respect to Rosy who as our eldest dog should have a bit more respect shown her by any newcomer to our furry family.
Ginger, the cat is not totally sure what to make of her yet, and when Charley pushed her luck and licked his face when he was asleep he jumped up and batted her away, no claws just a heavy paw, he is a wonderfully gentle cat.  But I think she's learnt not to take liberties with him when he's asleep!! 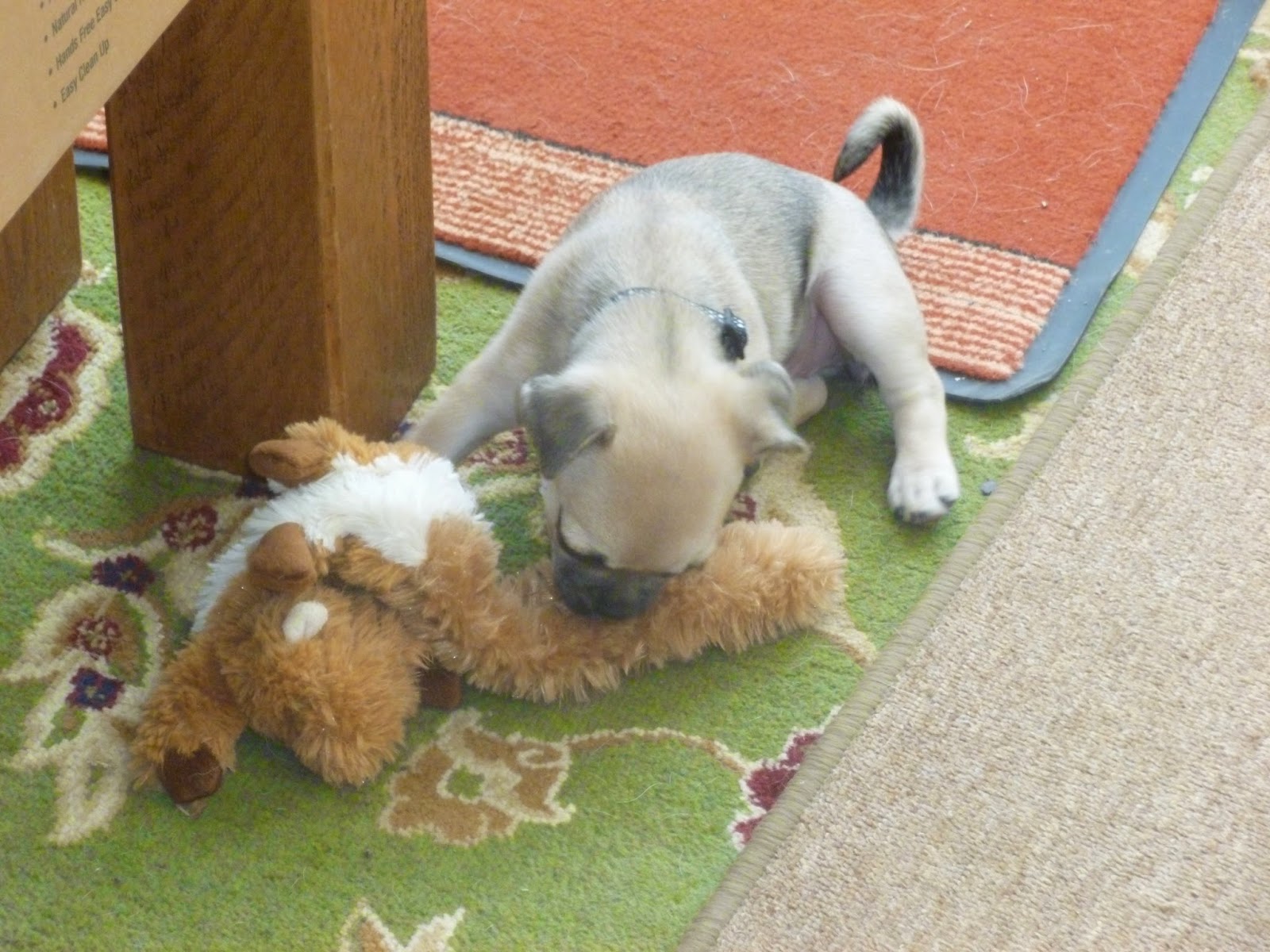 She's found all the toys that the older two had gotten fed up with ... 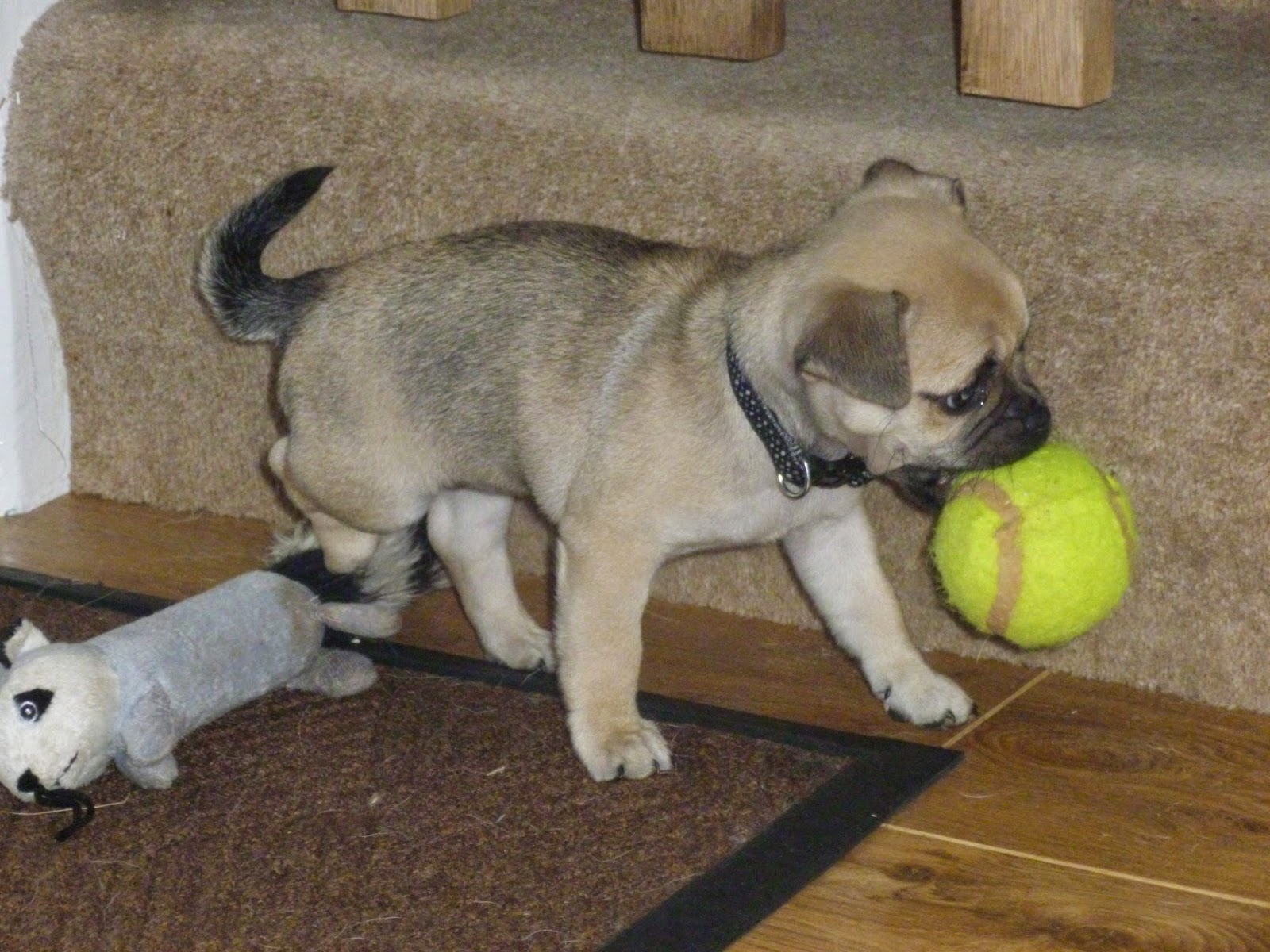 ... and is distributing them all over the house. 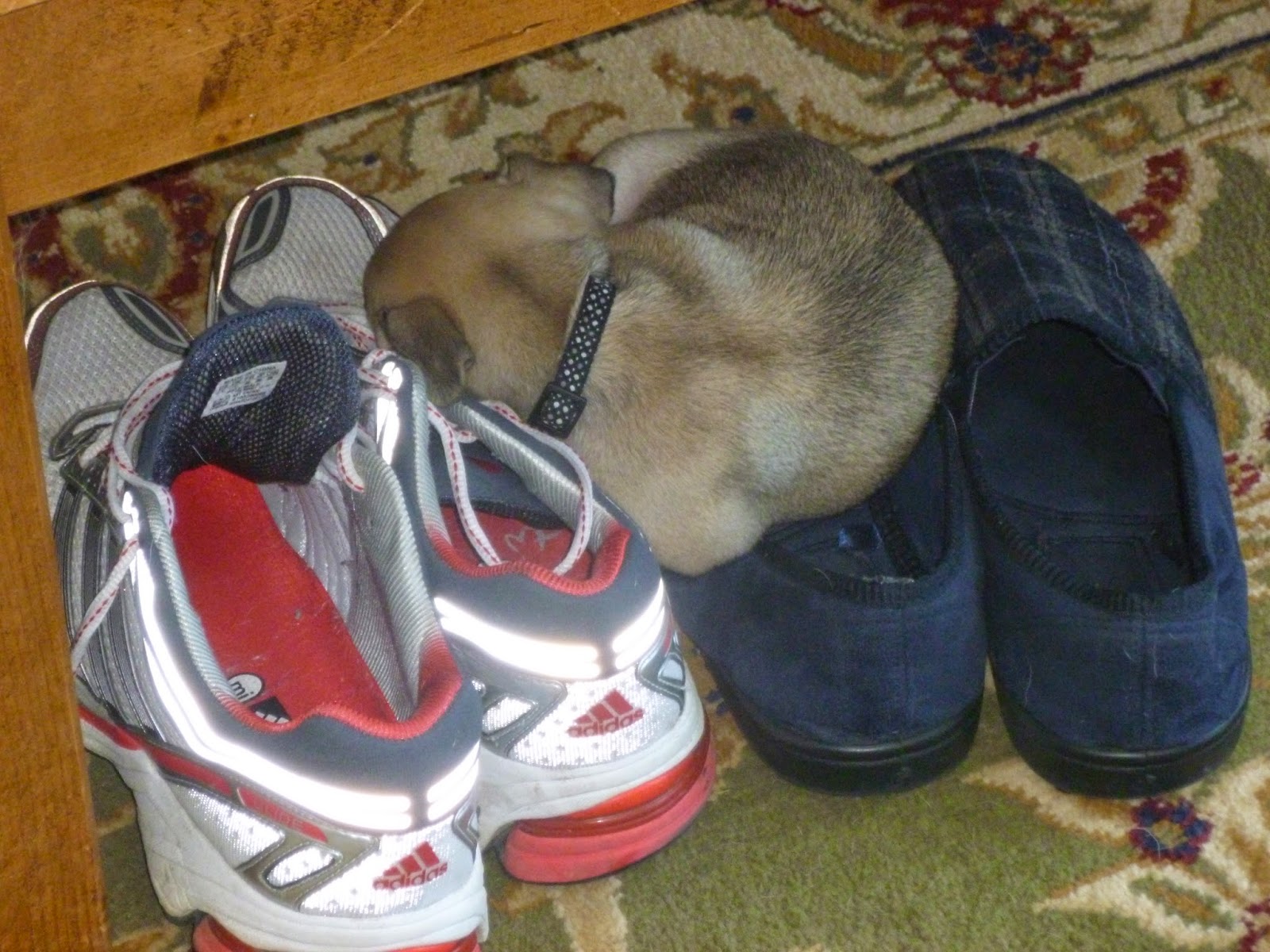 Half way through the morning it all got too tiring, and ignoring all the doggy beds she curled up on Lovely Hubby's slippers and shoes under the table and completely zonked out. 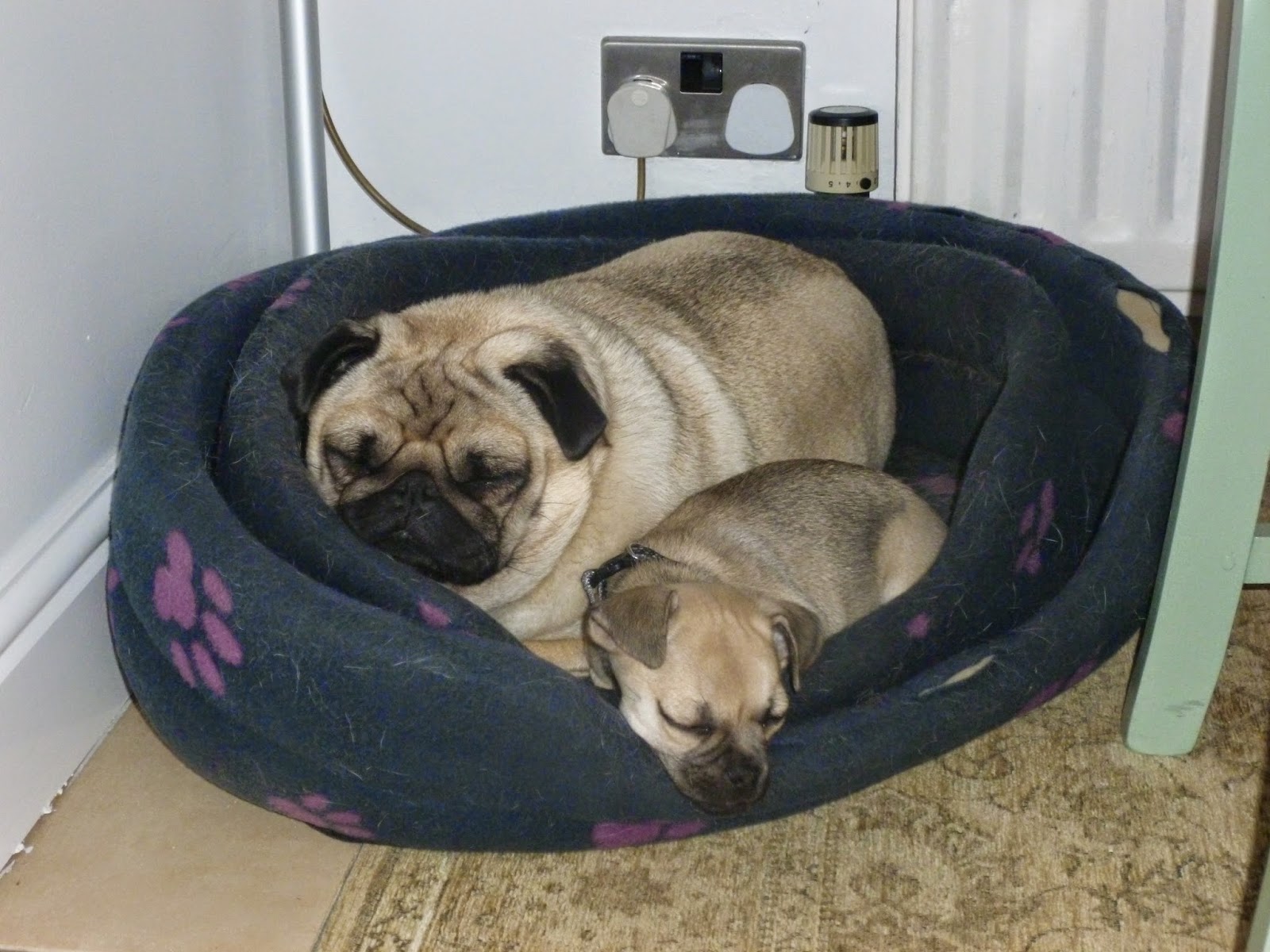 But later in the day when Suky went for a sleep, Charley joined her in the dog bed and they spent a couple of hours snoring happily together.
It was a good, if slightly dog orientated, weekend.
Sue xx