What Do You Expect to Find on a Welsh Hillside? 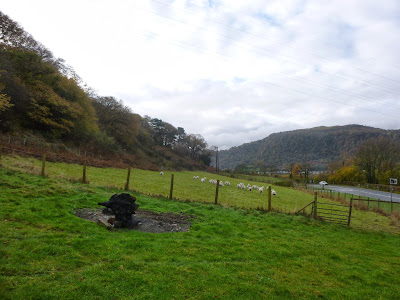 We pulled up at 3am, early on Friday morning after a long and diverted drive from Berkshire, to see twenty eight pairs of eyes shining in the trucks headlights.
The sheep had arrived!! 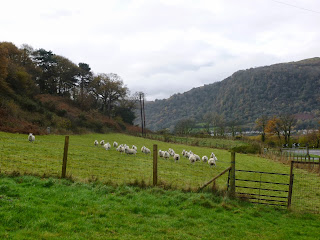 Chatting with our neighbour the other week we had mentioned that it was a shame our lovely grass was going to waste, and did she know of anyone with a couple of sheep that needed some Winter grazing.  She was straight on the phone, passing it over to Lovely Hubby who had a chat with a chap called Will, who yes, indeed had a 'few sheep' that would be grateful of a field of long luscious grass.
Well looking at the now neat grass he must have been round the day after we left and deposited them into the field, cobbling together a gate to fill the gap and leaving them to fend for themselves as sheep do. 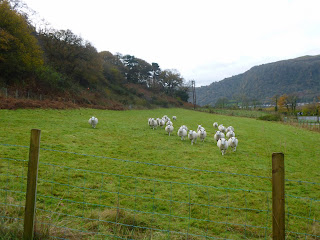 They had nibbled away and got the grass well under control, they rushed towards me when I approached the fence, no doubt my jacket was a similar colour to the farmers, although I had no bag of food on my shoulder, so their interest was short lived. 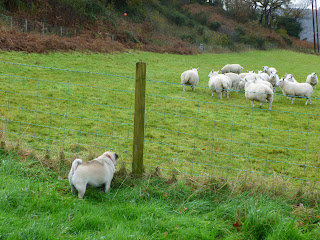 Suky loves, loves, loves all animals, be they cattle, sheep, goats, cats or chickens.   Give her something furry, feathered or woolly to look at and she will drool through the fence, wanting nothing more than to get up close and personal with any new friends. 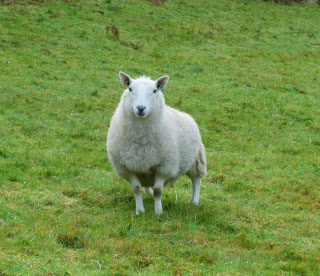 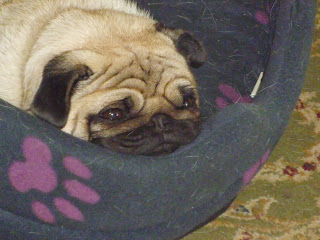 Later as she lay in her bed, you could see the thoughts passing through her mind.
' I've got woolly friends, just through the fence .... yay!! ' 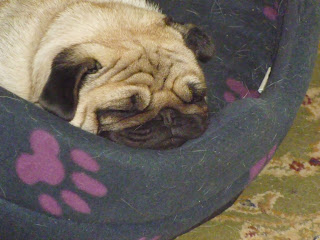 ' Sheeps ..... yay ... zzzzzzz !! '
Every trip outdoors now needs five extra minutes for her to go and check that her new friends are still there.
It's nice to have some sheep on our Welsh hillside, even if they don't actually belong to us ..... but one day they will.
Sue xx
﻿
Posted by Sue at 13:53