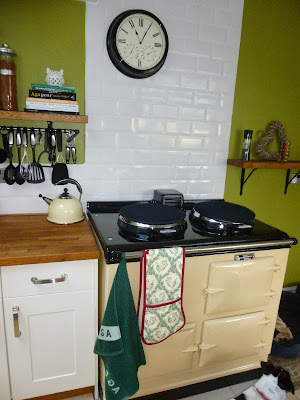 The kitchen took us longer than anticipated but only by a week, and that was only due to the last minute change of mind to do the extra green wall, which needed two coats of paint.  I'm so glad we did change our minds, it looks fantastic now. 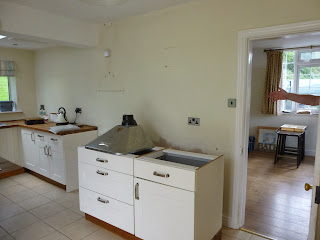 The kitchen all started with a change around of the units, moving this base unit from where it had sat next to the previous owners cooker, into the space vacated by their washing machine and tumble dryer. 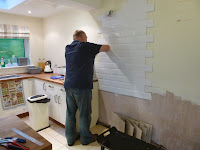 Lovely Hubby could then tile the wall behind where the Aga would sit ... 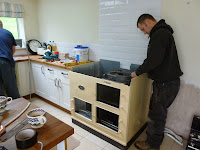 ... and then it was installed in just over half a day. 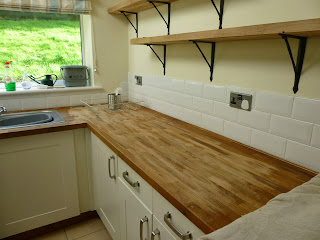 The next step was to make good use of the worktop that had sat on this unit, so we had it sliced into three to make lovely chunky shelves to go on the side of the kitchen where there are no wall units.  Two to the left of the Aga and one to the right.  The kitchen was then painted, the worktops and shelves were sanded and re-oiled, and then last week I found a bargain that finished it all off perfectly. 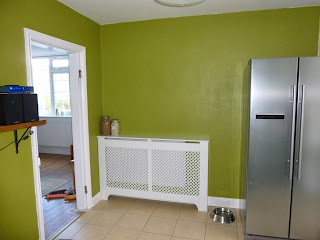 LH had asked me to call to Homebase top pick up a double socket blank to go on a socket that is hidden behind the freezer that actually has no wires running to it !  When I pulled up I was amazed to see the car park absolutely full, it's always quiet at our branch of Homebase, then I saw the signs 'Closing Down Sale'  'Everything 50% off''.
I was very good I only bought the light bulbs we needed and a couple of other bits and pieces and then walking down the aisle to get to the checkouts I spotted a flat pack radiator cover, slightly too large but just what our kitchen needed.  It was mine for half of its £109.99 price tag.
It was very sad in Homebase to see the shelves being picked clean, people were piling their trollies high with bargains but the staff were being as just as friendly and helpful as they had always been.  I chatted to the nice man that carried it to the checkout for me, he had been working there for 13 years and they had just been told that half of them would be unemployed from the end of this month, the other half have been promised jobs at the new Ikea which will open soon on the same site, but in the meantime they would all be out of work just a month before Christmas.
I'm really pleased with how the radiator cover looks in place,  LH got it together very quickly with just a couple of little alterations.  I am going to be using the top ledge of it for storing some of my large dried food storage jars. 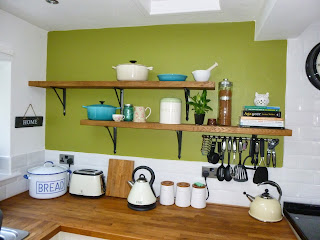 With the wall now painted behind the shelves I'm loving the way it's all coming together, there will no doubt be a bit of arranging and re-arranging of the things on them until I have everything I need to hand and it also looks good, but that's the fun part of finishing the kitchen off.
This weekend was spent putting things in the kitchen cupboards and seeing what we have and if there is anything else we need, although I really don't think there will be.  We are planning to whittle things down until we have just what we need and then a car boot sale will be done in the Spring to get rid of any excesses.
As well as the kitchen this weekend we were concentrating on the hall, or rather LH was.   Manfully climbing high on the ladder to do the stairwell walls and ceiling, I couldn't watch, so I didn't .... I nipped off to Manchester to spend a lovely few hours with my Mum and to pick up some Blueberry bushes and garden ornamentals that she can't take to her new bungalow with her. LH did have strict instructions to take care and keep his mobile phone handy in case of accidents, which thankfully didn't happen.
While I was away for the day he also nipped in Llandudno and picked up all our now stripped doors, so soon we won't be as open plan, and the rooms will feel cosy again.
When I returned from my travels on the wet and windy night we went round to visit our nearest neighbours, she lives on the other side of the  hill to us but rather than climbing over it in the dark we took the easy option and drove the 100 or so yards along the road to get to her driveway.  We had a lovely evening chatting, drinking coffee and eating homemade cake and finding out all about her and some of the local characters in the area.  We left clutching a piece of paper on which she had written the names of all local tradesmen that she uses and while we were there she called a friend of hers to  let him know that we had a field of very good grazing on offer for a while, it seems such a shame to leave the lovely lush grass to lose all it's nutrients over the Winter when a few sheep could be fattened off nicely on it.
So yet another productive weekend and now back 'home' it's starting to look very bare, the balance has now very firmly tipped and I can honestly say we are longing to be home in Wales full time.
Sue xx