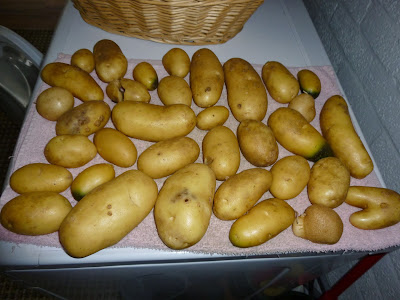 Yes, this is a totally free crop, potatoes that I didn't buy or plant, leftovers from potatoes we missed digging up last year.  In fact this year we planted NO potatoes at all and have been eating new potatoes, late potatoes and now this last batch that I honestly thought would have rotted away knowing how much rain has come down in the last few weeks.  So I was delighted when on sticking in the garden fork some lovely clean perfectly formed potatoes were speared by it's prongs!! 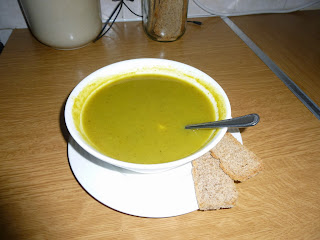 Half a dozen of the freshly dug up spuds were used straight away to make a big pan of Leek and Potato soup, it's so very green because I threw in a handful of Kale that was in the fridge, waste not want not!!  This fed us for four meals each .... lots of soup. 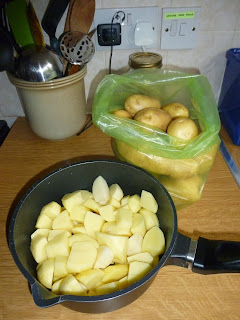 We had enough for a large pan of chopped bits, avoiding all the green bits and damage where I had slid the prongs of the fork through the potatoes when digging them up, this was turned into mash for a meal one night this week, Bangers and Mash with Red Onion Gravy (veggie sausages for me of course). 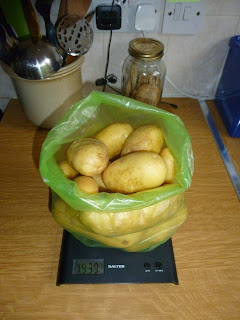 Once the pan was full of the bits I popped the rest in a bag and decided to weigh them to see what was left, not bad at all, just under two kilos and that was after a pan full of soup and one of mash. 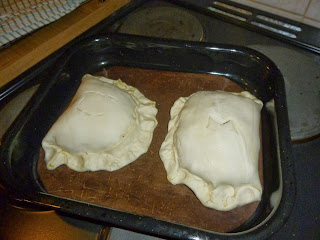 Leftover mash, because there was far too much for just two portions from that pan full was added to the contents of these pasties, Cheese, Onion and Mash for me and Steak, Sausage, Onion and Mash for Lovely Hubby.
And we still have the bag of spuds in the cupboard, which should last us a couple of weeks at the rate we eat potatoes, but shock, horror I have only one portion of pasta left here, so the next couple of weeks will be about using up spuds and rice.
It's nice to see the supplies going down and I'm finding things I really had forgotten we even had tucked at the back of the cupboards, so there will be some inventive meals coming up in the next few weeks.
I'm off now for a flick round with a duster before a new set of prospective tenants come to have a look around the bungalow, there are lots of surfaces to flick a duster at but luckily no things or books left anywhere to actually dust around.
Sue xx
Posted by Sue at 09:13