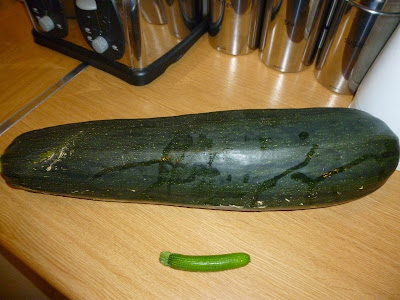 This week I am spending an hour in the Veggie Patch each morning after I have finished cleaning out the henhouses, generally tidying up and bringing in the last of the crops.  I thought it was about time I harvested this beauty before the wet, wet weather gets to it and turns it to mush ..... then I found some new baby courgettes growing on the sad looking plant. 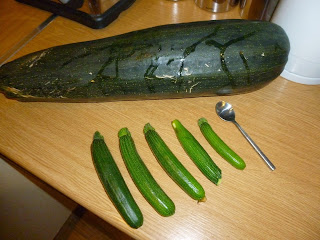 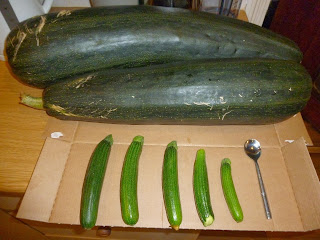 ... I realised the giant had a brother.
The little ones all went in tonights tea, now I just have to think of what to do with two giant Marrows.  It was Lovely Hubby's idea to put the teaspoon in the picture so you could get an idea of the sizes :-)
I also picked all of the carrots and spent a little bit of time this evening blanching and open freezing them, so that's us with a stock of carrots that should last us a couple of months, tomorrow I think it's the turn of the Beetroot.
I did have a really nice surprise when I found some lovely crisp lettuces just begging to be picked, they seem to love the masses of rain we've been having and were super fresh and crisp.  Lettuce picked from outdoors in November, now that's a new one for me.
I hope you like the new header picture, I realised the other one had to go when I packed the 'Basil' sign in with all the plant pots and things I was packing yesterday.  The plants lasted until about two weeks ago, but were suffering with us being away so often and getting sporadic watering so they were given to the chickens to peck at and then went on the compost heap.
Sue xx