Luxury Meals Using What We Have 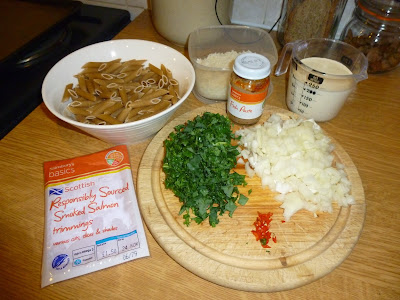 There's been no big supermarket shop for me for the last few weeks, in fact thinking about it there's been no big supermarket shop for me for ages and there won't be.  We are still using up what we have and supplementing it with just enough fresh stuff bought as and when needed.  For instance the only thing amongst all of the above that was bought last week was the pack of Salmon Trimmings.
All I do is open the fridge and check what needs to be used up first and then have a look in the freezer and cupboards and decide what will go with it to produce a meal.  In the picture above the main things that needed using up were the parmesan style cheese, (it had been brought out of the freezer the day before and mistakenly put away into the fridge, usually once grated it lives in the freezer) and the cream, so I decided on a creamy Salmon and Pasta dish.
I picked and washed some Kale from the Veggie patch, chopped an onion, picked and finely chopped a fresh chilli off the plant on the kitchen windowsill, now on it's third crop of chillies, fished a jar of Basics Fish Paste out of the cupboard and weighed out enough pasta for the two of us (and a bit extra to add to the dogs dinner).  Along with the Smoked Salmon Trimmings that I had bought to try after hearing such good reviews about them, we had a meal fit for royalty.
Only problem was we had eaten it before I remembered I hadn't taken a photo of the finished dish ... oops!!
If you want to make it for yourself simply pop the pasta on to boil, then put the chopped onions in a frying pan with a dash of oil to soften slowly, after a couple of minutes add the chopped chilli and let them cook together for about five minutes.
Add the fish paste and then pour in the cream (or you could use yogurt or crème Fraiche, whatever you have), add about three quarters of your parmesan and then the salmon trimmings.
Your pasta will be almost ready now so add the Kale to the water and cook for one more minute, then drain them making sure to catch a cupful of the pasta water in case you need to 'let down' the sauce slightly and then tip the pasta and kale mix into the frying pan on top of your salmony sauce, stir everything together, add some of the pasta water if you need to thin it slightly and then tip into your serving dishes.
Top with a sprinkle of the remaining parmesan style cheese and serve.
If you're having a skint week you can omit the salmon trimmings altogether and add a little more chilli to really zap up the flavour, but this really is a cheap but luxurious tasting meal.  I've just worked it out and not counting my home grown kale and chilli it cost me £2.98 to produce, so that's a lovely luxurious meal for less than £1.50 a head, without the salmon trimmings that makes it just 75p a head and believe me it does taste almost as good without them!!
This is a meal we now have on a regular basis since reading about it on Jack Monroe's blog A Girl Called Jack earlier this year, and if you visit a well known Italian restaurant it is very similar to their 'Penne con Salmone' which costs £10.95 a time.  So much cosier to stay at home in front of a roaring log fire and save lots of money.
Sue xx﻿
Posted by Sue at 17:18