Make the Most of What You Have and Know Your Savings 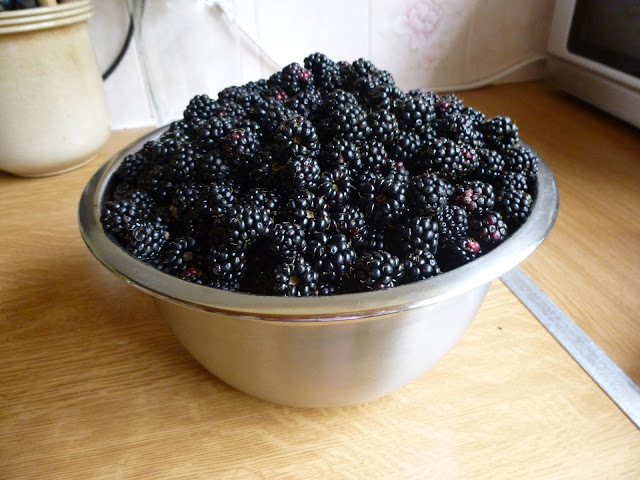 Living simply, growing your own foods, even buying bargain foods at a good price or whilst on offer is the best way to really cut down that housekeeping bill.  To make every purchase, every pick of homegrown goodies and every buy of a 'yellow stickered' bargain count is the real challenge and one that I love.
It's no good buying the bargain, picking the fruit or snapping up every stickered pack on the shelves if you get home and simply stick it all in the fridge or toss it into a freezer where it could lie not seen again until you open the lid to throw the next bargain on top.
﻿ 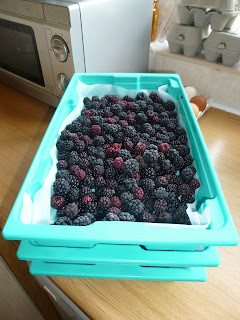 With this firmly in mind yesterday afternoon as soon as I had drank a cup of coffee and had something to eat after the car boot sale, I washed all the blackberries that Lovely Hubby had picked in my absence.  After being strained through a colander they were left to dry off in a thin layer on a couple of tea towels protected from any marauding flies in the kitchen by yet another towel placed on top.  Later they were tipped onto greaseproof paper lined freezer trays and stacked and placed in the freezer. 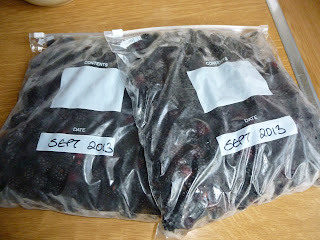 I left them overnight to open freeze and then first thing this morning they were tipped into zip lock bags, I tend to use bags for fruit or other small things rather than boxes, as when you take a handful out you can squish the bag down to exclude the air and then reseal it.  Air is the enemy of small frozen things and this is why they get freezer burn and the flavour diminishes, so exclude the air and keep the flavour.
I labelled them with the month of picking just in case they last long enough for me to forget when I acquired them. 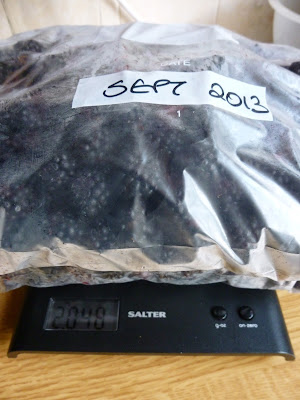 Before they went back into the freezer I weighed the two bags and in total, as you can see we have just over 2kgs.
My next thought was "what would these have cost me to buy this week if I went to any of the supermarkets, so I went on to mysupermarket.com which I use for any price comparisons or checks that I want to make and found out.
To buy 2kgs of British Blackberries would have cost me £16.
Then while I was there I found out how much it would cost me to buy an Apple and Blackberry Crumble, because I have had eating one on my mind since yesterday, if I hadn't been so tired I would have knocked one up last night, instead it will be on the menu tonight.

To buy one would cost me £2.50 in Sainsb*ry's, to make one myself with my free Apples, and Blackberries and the Oaty Crumble Mix that I bought from Approved Foods last month (see HERE) is going to cost me just under 15p!!
So making the most of what you have, storing it well and knowing where it is and what it's worth are brilliant ways to keep you motivated and living on as little money as possible.  If you know how much your hard work in picking, baking, or making has saved you it keeps you on track and inspires you to do even more.
All through Simple September I will try and give you one of my TOP TIPS at the end of each post.  I don't know if I have 30 but I'll do my best.
Sue xx
Simple September TOP TIP #1
When freezing foods think how it is when you buy it frozen from the shops.
In the case of most bagged and boxed foods you get them free flowing.  So freeze them yourself this way, on any tray you have.  I have the blue trays you see in a lot of my photos (bought by my Mum and Dad from Lakeland many years ago), but before they gave me them I used to use my ordinary baking sheets.  Lining them with greaseproof paper makes things less likely to stick but if you haven't any simply return to the freezer about an hour or so after placing your trays in, and move everything around slightly to stop things from sticking.
Free flowing frozen food makes it so much more easy and cost effective to remove exactly the amount of food from the freezer when you need it.  For example sausages .... if you get a pack of six on special offer, freeze them individually don't just put the pack in the freezer as it is.  True you may want to eat all six in one go in a large casserole or breakfast for three people, but there's always the chance that you will simply fancy a sausage butty and only need two!!
﻿
Posted by Sue at 10:18