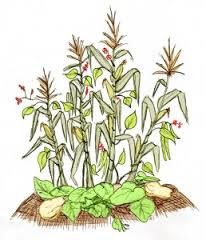 The Three Sisters idea of planting was copied many years ago from the Native Americans who made full use of the fertile patches of soil they had. Crowding the ground with plants that suited being with each other and helped each other withstand whatever Mother Nature might throw at them, storms, rain, drought, blazing sunshine.  Together they are stronger and more likely to grow well than they would be individually. 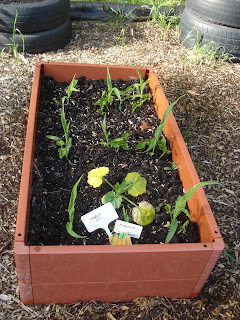 You plant in very well compost enriched soil, first put in your Corn or Maize seeds or plants, once they have started growing strongly you plant your Beans alongside them and then in between these plants you pop in a couple of Squash or Courgette plants. 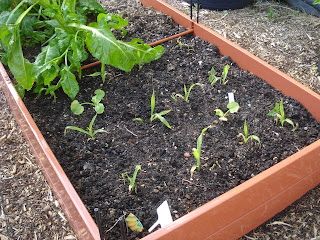 I used half of what was a Perpetual Spinach bed, later the Beetroots went in instead, and the small bed in the photo above this one.  This is what the beds looked like in June of this year.  The corn and courgette plants had been started off in the greenhouse and the bean seeds were pushed straight into the soil, three per corn plant. 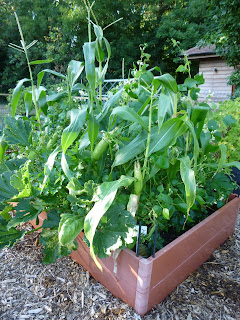 They grew slowly at first and for a while it seemed the beans were outgrowing the corn with long strands searching for something to wrap themselves around, but I stood firm and refused them any support.  As you can see it worked out fine, the corn grew strong and tall and the beans thankfully draped themselves all around the stems of the corn.
The reason it works so well is because the Squash plants cover the ground with their large leaves and stop water evaporation after rain or watering, the Beans enrich the soil with their nitrogen and the Corn acts as a framework for the beans to wrap themselves around as they grow.  All the plants benefit from this system and it means that you get three crops from one relatively small space. 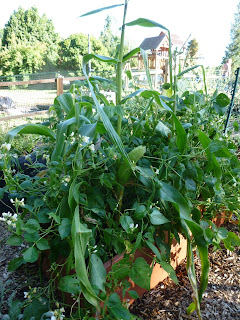 This year was my first proper attempt at this and it has worked wonderfully and it's something I will always do from now on, I have not had to weed this bed once, there's no room for weeds to get a hold and although we have had such a dry Summer the plants have survived on minimal watering.  Just a really good soak every couple of weeks when there wasn't any rain.  We have had pretty good crops off all three as well, although I do have to remember about the Courgette plants tucked deep beneath the undergrowth, we've managed to get a couple of yellow Marrows due to my not noticing just how big the courgettes had got, still it's all food :-)
Definitely an idea to take with us to Wales :-)
Sue xx
Simple September - Top Tip #8 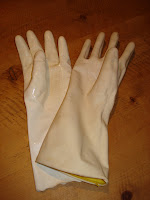 Rubber Gloves
If you're right handed you always get a leak in the right hand glove first and vice a versa, so what do you do, throw them both away and open a new pack?    NO ... do what I do and reach under the sink for the last left handed glove that was left all by itself and turn it inside out.  Voila ... a new right hand glove with no holes :-)
Other uses for your leaking gloves, because at some point you will have two leaking gloves -
- wear them outside either over or under your gardening gloves for a reasonably waterproof second layer.
- cut into strips for your own homemade rubber bands, large from the wrist end getting smaller as you go up to the fingers and thumb
- also you can open up the strips to make ties for tying your climbing plants to their trellis, there is enough give in the rubber not to strangle the tender stems
- use them for jobs that are dirty but not wet and they will be fine to protect your hands ...

... or you could just chop them up and make finger puppets with the children.
But whatever you do don't just throw them away without thinking about what's possible, they cost you good money!!
Posted by Sue at 15:07