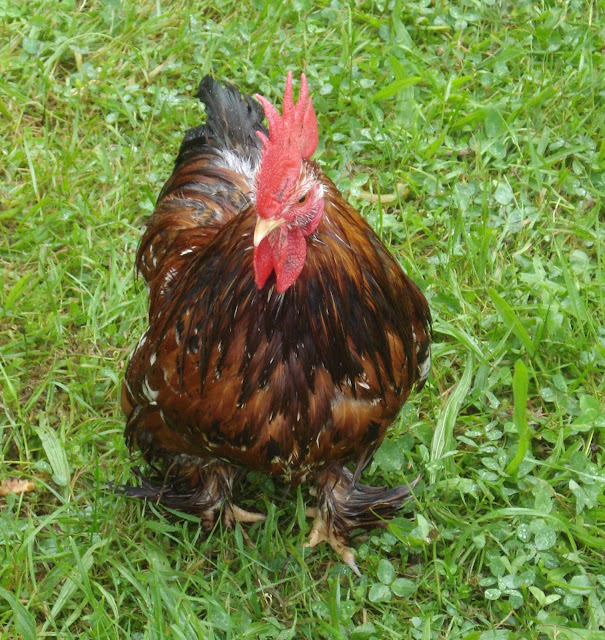 There are times when only a small cockerel will do .... they are gentler on their wives, they rule the roost with a fairness and quiet dominance and in the case of our Caldwell II they would defend it until they can defend it no more.
In the case of Caldwell it almost cost him his life (see HERE) 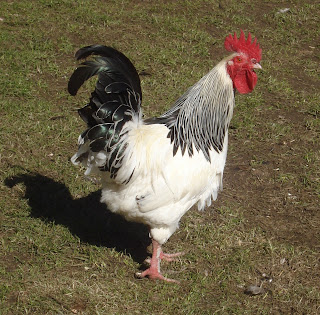 Harold also joined in the defence of the girls that day and between the two of them managed to scare off the fox and protect most of the flock.  With Caldwell the top cockerel out of action whilst he recovered from his nasty injuries Harold claimed the position at the top of the pecking order, but with his rise to power he began to wield an understandable but regrettable brutishness and total dominance.
Where Caldwell had kept everyone in their place with a look and a stance that dismissed any argument, Harold went in with beak and spurs, where Caldwell treated his wives with respect and gentleness alongside his total dominance, Harold was all for grabbing and yanking out of feathers and instilling what can only be described as total fear amongst the smaller birds.
So while I was away last weekend Lovely Hubby took the sad decision, for the sake of the flock to cull Harold.  We never take a decision to end an animals life lightly and this was done for the good of the girls.  His body was left through the woods at the entrance to the badger set, so was not totally wasted.  Although to have to kill such a magnificent bird was hard.
Bit by bit Caldwell is gaining the respect of the whole flock again and you can almost feel the sense of relief emanating from the girls.  Not only are their feathers growing back, their dignity is restored, and step by step Caldwell has moved up the perches in the henhouse at night.  Now he sleeps with Poppy and Daisy by his side and his other ladies cuddled around.
Chicken World has once again settled into a calm place, one that by tomorrow will be even calmer, for then I will have some more sad news to tell you about.  Some decisions are hard, but they have to be made.
Sue xx
The title of this post is for, and solely for a certain gentleman in Blogland who told me I had to be much more controversial, so I was.  John I expect my visitor stats to go through the ceiling and my Follower numbers to multiply like a family of bunnies on Viagra :-)
See HERE for it all to become clear, you'll need to scroll down to my comments and John's replies.