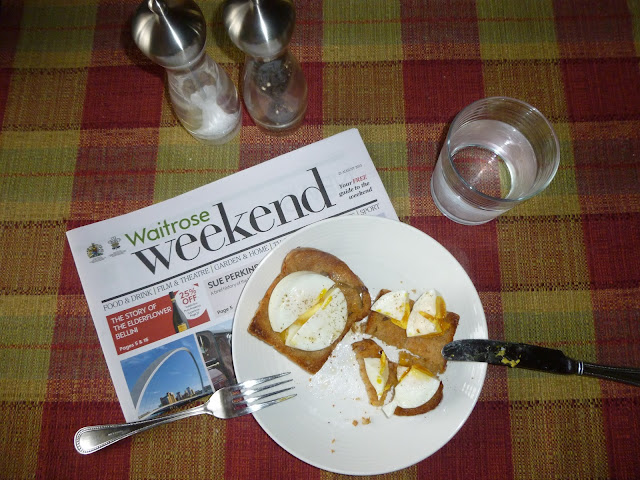 The picture that sums up our Bank Holiday weekend in one shot.
A bit of shopping, with a coffee to linger over at Waitrose, lots of eggs gathered off the chickens who are all doing so well without the large cockerel and geese to bother them, the new girls have settled in brilliantly well and are all laying good eggs.  Leisurely breakfasts including homemade bread.
And I think the bread was the real success of the weekend. 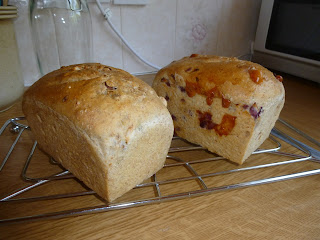 Made to my usual  recipe, but as it was a rainy day I had more time to play so I decided to have a little experiment for a change. 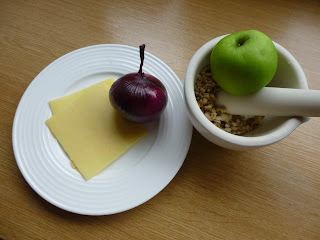 Adding cheese and red onion to half the mixture, and chopped nuts and grated apple to the other half, well I say half the mixture but I also added a bit of extra flour as I do most of the time to the basic bread recipe and made us two pizza bases for tea that night.
(My usual bread recipe is on the 'Recipes I Use Regularly' page at the top of the Blog.)﻿ 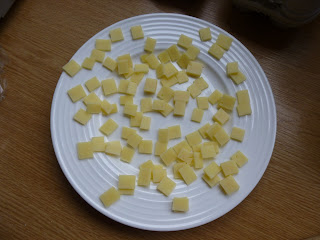 I didn't have any block cheese left and the grated cheese although tasting fine for flavour would most likely have dissolved completely into the mix and I fancied being able to see the cheese so I chopped up a couple of cheese slices I found lurking in the bottom of the fridge.  They were like tiny doll sized cheese slices when I had finished chopping - very cute!! 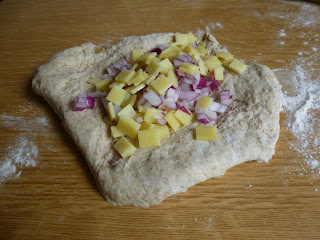 The two were added to the dough after it had proved for the first time  ...... 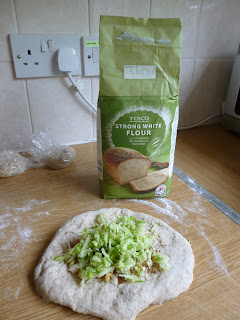 ... the apple and nut mixture co-ordinating beautifully with my bread bag - so I just had to get a picture!! 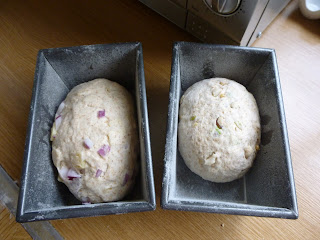 Then shaped into loaves and put into my 1lb bread tins, left until they had risen above the height of the tins and then popped in the hot oven. 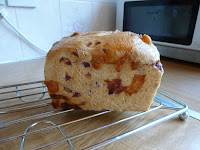 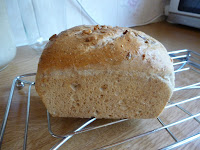 Apple and Nut
They both tasted lovely, well homemade bread usually does, but the added flavours and textures made for a really good change.  We had a few slices of both with cheese and chutney for one lunch, had some with homemade veggie soup for another and had two slices each with our poached eggs for breakfast on Monday morning. 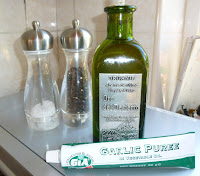 We had the final two crusts last night, they were cut into cubes and had these ingredients added to them to make croutons to go with our Caesar Salad.  I meant to take a picture but we had eaten our tea before I spotted the camera - oops!!
So it was a good and tasty experiment and a brilliant use of a rainy few hours of a Bank Holiday weekend.  We both love simple home baked and home cooked foods and I think that bread really is the staff of life even if we have both consumed in one weekend more carbs than we have in ages.
And then last night I sat down to watch The Great British Bake Off and what should they be doing but BREAD!!
Sue xx
﻿
Posted by Sue at 10:57