Yay!! It's Done -The Final Car Boot of the Year 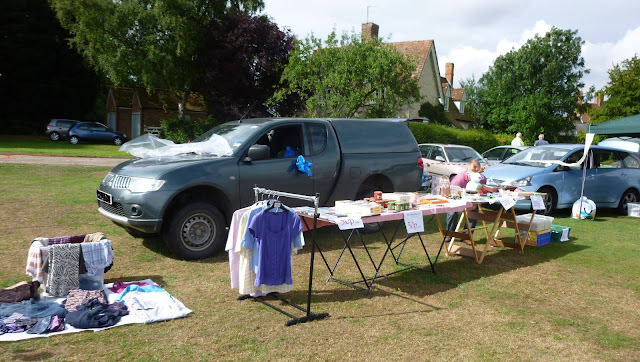 This was our table after the first hour of the car boot sale, I simply could not have got to it any earlier to get a picture.  It was a brilliant sale, other stall holders were amazed at how much they sold in the first hour too.  The weather looked a little bit dull at first and I think lots of folk were worried if they didn't grab a bargain quickly the whole thing would be rained off.
But as you can see the sun came out and it warmed up a treat and soon the steady trickle of folk snapped up all our excess 'stuff' bit by bit.
﻿ 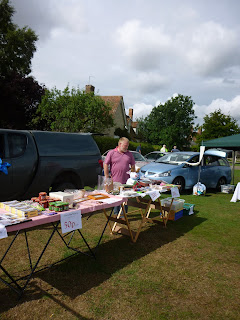 We were very good, as we were parked right next to a lady under a gazebo selling cup cakes and all sorts of yummy homemade goodies.  We stuck to drinking our green juice though, and snacking on grapes throughout the morning kept temptation at bay. 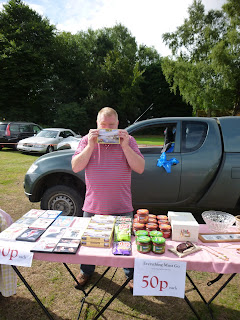 "Last few boxes ... grab a bargain now."
Someone should tell Lovely Hubby that even though he is doing very well with his weight loss he still can't manage to hide behind either a cuddly reindeer (in the first photo) or a box of toffees ... if I want a photo of him I will get it.
We made a grand total of £163, which quite frankly we were amazed at, after all the majority of our stuff was priced at 50p and 20p with only we reckon about £40 worth of stuff at higher prices.  It just shows how many little bitty bits we actually had.  On the way home we dropped off all the good saleable things into the charity bins in the supermarket car park and a bin bag full of rubbish went in the wheelie bin at the end of the drive.  So the only things that went back into the Man Shed in 'car boot corner' were the empty boxes and the paste tables.
A very successful and satisfying day.
Sue xx