What Do You Usually Expect to Find in Your Watering Can? 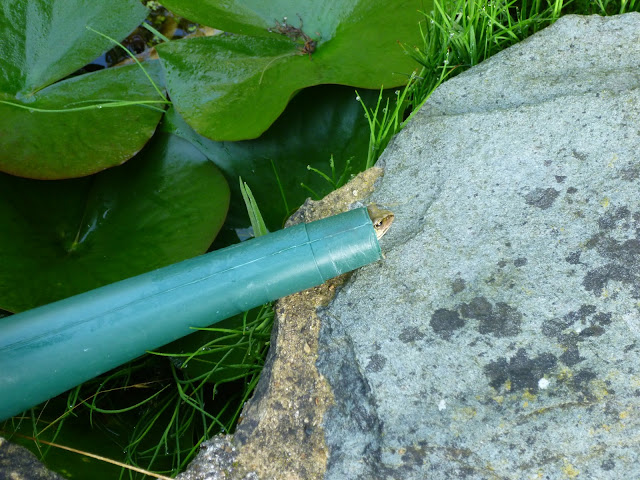 What do you usually expect to find in your watering can?  Well in mine there's usually water ... I like to fill them the day before especially if I'm using tap water, to let it sit and be at the same temperature as the plants and soil that I'm going to be using it on. Occasionally it's a tomato food mix or 'worm tea', or now and then 'nettle juice' that I've made myself, on occasion it's fresh air when I've been to lazy to get ready for the next day.
What I'm not used to finding is a little frog, sitting waiting to leap out of the spout!!
﻿ 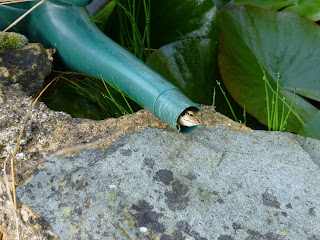 Lovely Hubby spotted our little amphibian friend first.  The watering can was under the kitchen window and as LH went past to get to the Manshed he spotted a little nose peeking out, at first he thought it was the edge of a beak and thought a little bird had somehow ended up in there, but a closer look proved it to be a little frog.
He, being a true Bloggers husband, shouted out "come out here quick ... and bring the camera". 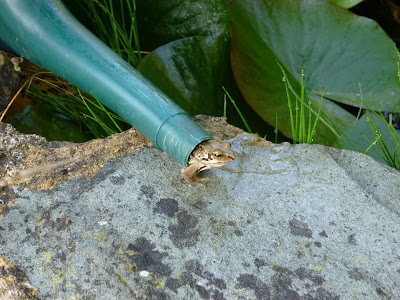 We carried the watering can over to the pond, so the dogs or cats wouldn't catch our little watering can sitter as he popped out and LH carefully began tilting the can (it was half full of water) so that he could pop out gradually ... 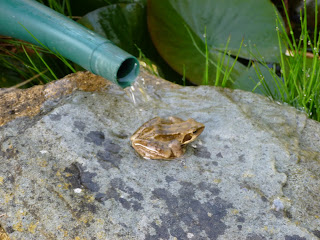 ... and then with a bit of a swoosh he was out.  Not at all surprised by his gentle eviction. 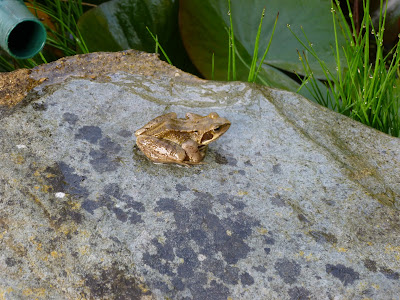 He was a gorgeous little thing.  We can only assume that he had leapt into the watering can for whatever reason and had managed, thanks to the water level to get himself onto the base of the spout on the inside and gradually work his way up.  Poor little chap, a lesson to me there I think and from now on ALL my watering cans will be either covered at the top over night or left on their sides for little creatures to explore and escape from. 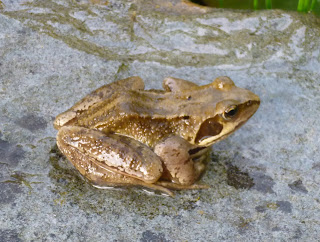 Still at least this lovely little boy is safe and well and back near the pond.
(How to tell the difference between Frogs and Toads.)
Sue xx