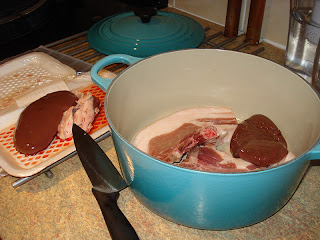 The other day Lovely Hubby came down from the spare room (where the large freezer is kept) clasping to his manly chest a pack of thick cut pork chops (RIP Bruiser) and a pack of lamb kidneys.  How do we have lamb kidneys I hear you ask, where have we been hiding the flock of sheep on the farm, well we haven't, but somehow when our pork came back from the butchers we had acquired two trays of lamb products, I only hope the smallholders that sent their lamb carcasses to be butchered enjoyed their surprise trays of pork chops and sausages!!

Can I have this for tea tomorrow he beseeched with his lovely blue eyes looking pleadingly into mine.  No problem I said.......at the time!!

Now before I became a fully fledged vegetarian (only in January of this year), I struggled with things that looked like animals or parts of animals. I was one of those dreadful people who could eat the Chicken Kiev, chomp on the fish finger, even eat the prettily shaped lying on it's tray chicken breast, but could I handle a chop, remove giblets, be-head a fish........noooo !! 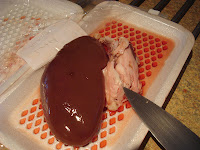 And now I was faced with this, admittedly beautiful specimen, of a lambs kidney, I pushed aside all thoughts of the job it used to do inside Larry, I mean the unnamed baby sheep that lived it's short life gambolling about someone elses farm ( oh I do hope it was happy life).

The chops were no problem I just lobbed them into the pan, but the kidneys had white stuff on them which I knew from watching carnivorous Hugh FW ( yes I know he's pretending to be all veggie at the moment but he has a book to sell you know! ). So I gritted my teeth, poked and prodded and got it off, chucking the offending kidneys quickly into the pan to join their friends the chops.

After scrubbing my hands under hot (very hot) water for a few minutes and washing all the utensils that had come into contact with the yuckiness I had just lived through, I had to think of what to do next. 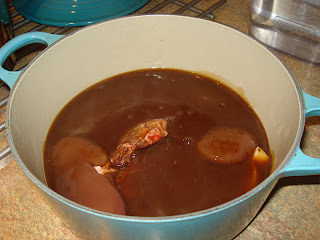 I know I thought I'll cover them up with Bisto......Arrgh Bisto or something like that!!  I honestly thought this would make a strange flavour combination, pork chops, lambs kidneys and the almost beefy taste of Bisto, and this would mean I would never have to cook meat again ....... but LH absolutely loved it. I served it with homegrown sweetcorn dripping with butter.  (If anyone's interested I had Quorn mince with peas and rice.) 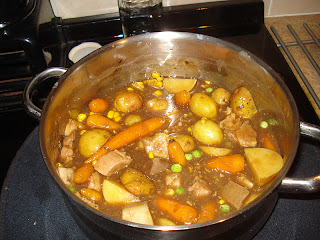 The next night I spruced up his leftovers with some homegrown potatoes, carrots, sweetcorn and peas and he declared it yet another success.  Oh well I guess I'll have to carry on cooking with dead stuff then.....oops....I mean meat!! 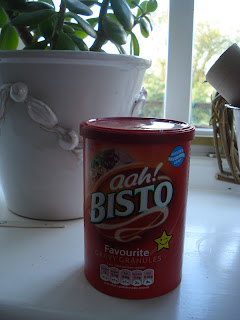 Did you know Bisto for all it's meaty tastiness is actually suitable for vegetarians, nope, neither did I until I read someones Blog a few weeks ago, I double checked the pack and I was so pleased, for although it has rather a long list of ingredients, most of them are recognisable and it can be a useful standby to have in your store cupboard. 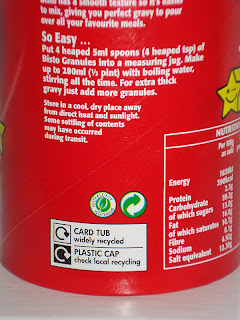 Bisto have not paid me to promote their product......although if they sent me some free samples I'm sure I could think of a few other more veggie friendly uses for the stuff lovely product, instead of just covering up yucky bits of animals. 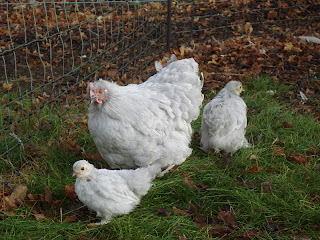 And on a completely different note - here is Little Lucy with her babies, now named Daisy and Poppy.   Thank you to Iris and Fern for choosing such pretty names for our newest Lavender Pekin Bantam chicks