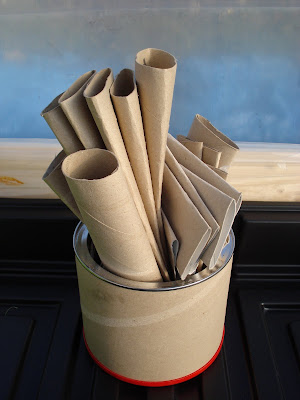 As the rain thundered on the polytunnel on Saturday I was warm and dry inside getting back to business.... ~ 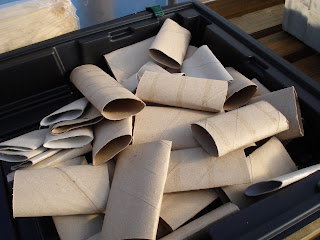 ...tipping out the bags and bags of toilet rolls tubes that I (and my family and friends) save... ~ 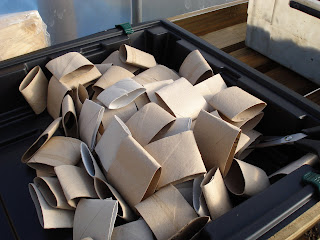 ...cutting them in half (or quarters if they from kitchen rolls)... ~ 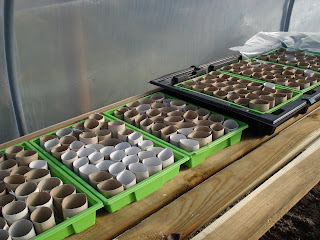 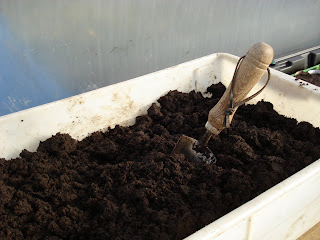 ...and then mixing the compost, some potting, some general purpose and some of our own farm made compost. ~ 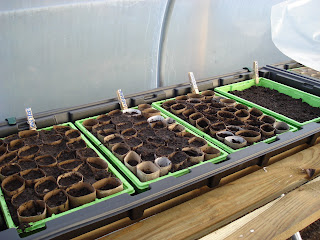 Add the two together, pop in some seeds and we are at last properly on the way to growing and eating our own 2011 veggies. ~ We are currently still eating lots of our saved produce from last year and the chickens are getting the freedom to roam the farm at the moment as they work their way around the raised beds eating weeds and bugs to clear the soil ready for outdoor planting in a few weeks. It also means that the ground in Chicken World has a bit of a rest from muddy feet churning it up (yes we are DEEP in mud here on the farm at the moment). ~ The Challenge ~ 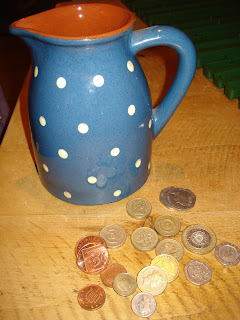 ~ The Challenge is going VERY well this week. We have had some unusual and interesting meals made out of store cupboard ingredients, and the contents of the freezers are at last significantly going down. I may be able to turn off the big chest freezer for a couple of months soon and save a bit of money on the electric. ~ Last week I spent a total of £34.69. Some of it at the nice little farm shop I have discovered near to our potential new farm and £21.83 of it at the 'bad place', but as I went with the intention of sussing out bargains and taking a closer look at cheap ranges, it was a bit of a fact finding mission, one which I actually quite enjoyed. It was as though blinkers had been taken off my eyes, instead of cruising around popping things 'willy nilly' in my trolley I scanned shelves I had never even noticed before, and found lots of bargains. ~ One of Lovely Hubby favourite bargains of the week was 4 cans of Carling Lager reduced to half price (£1.50 instead of £3) simply because one can had slipped out of the plastic rings that hold them together, they had been held back as a foursome by some bright spark wrapping parcel tape round them. When I got them home I peeled this off and slipped the can back in the ring and it stayed there perfectly, an example of an employee costing the shop money by not taking 2 seconds to do a job (in fact it must have taken longer to get the tape and wrap it around!!), but I benefited so I shouldn't grumble (that's just the ex-shop manager in me coming out...Lol). ~ As it's almost the end of the second month of the Challenge I decided to count up what is in Spotty Jug and I was pleasantly surprised to find I have £209.13 already. Wow....this has inspired me to continue even more, just how much can I get together before our holiday in May. ~ Sue xx
Posted by Sue at 09:17