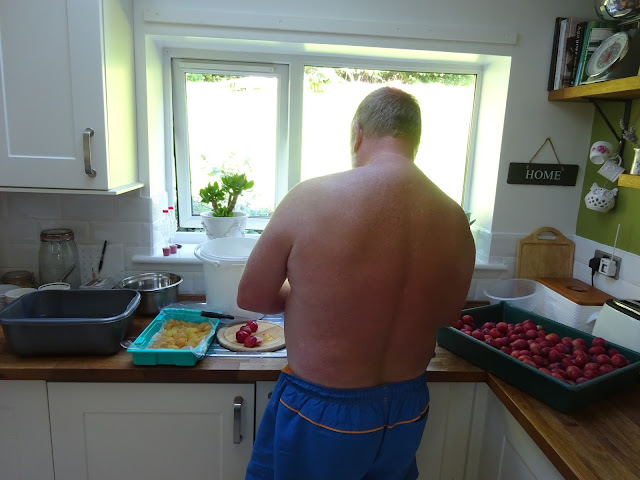 The other day we set up the plum production line, washing, stoning, skinning and then freezing a huge tray of our homegrown plums. 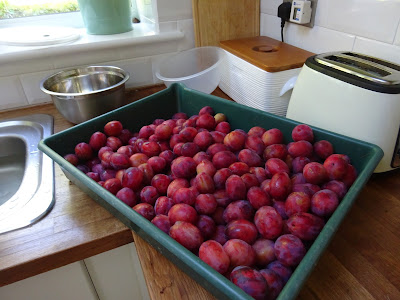 The Plum tree in Chicken World has done us proud this year, last year was a bit sadder and we lost most of the plums to the wild birds, but this year it would seem they have their minds and their feeding habits elsewhere and our crop is just brilliant, and all for us.  I think it helped a lot grease-banding the tree at the beginning of the year to keep codling moths and other bugs from crawling up the trunk, meaning that so much more of the crop is edible and in very good condition.

Anyway even after making two demi johns worth of plum wine a couple of weekends ago, taking plums to Mum for a couple of weeks and Lovely Hubby eating them whenever he passed the tree we still had this lovely lot to harvest and make good use of. 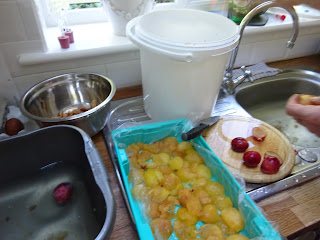 The rinse, cut in half, de-stone, peel from skin and put onto open freezing tray department. And in no time at all with two of us working we had four trays ready for the freezer. 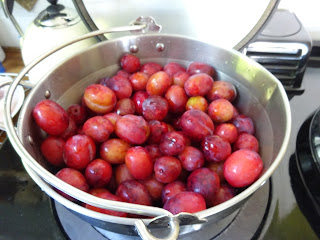 We still had enough to fill the jam pan almost to the top with what was left and add a litre of water.  It was all brought to the boil and left simmering for half an hour. 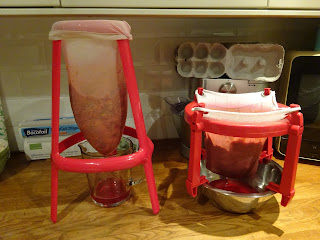 And then transferred to the jelly bags to drip through slowly overnight. 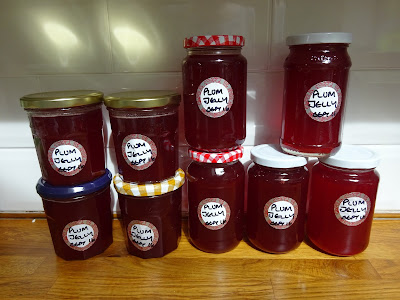 The next day it was all measured out, tipped back into the clean jam pan and I added 450 grams of sugar for each 600mls of plum juice.  It was brought slowly up to temperature so the sugar dissolved completely and then boiled rapidly for 15 minutes until it reached jam temperature and setting point.

Then it was poured, hot jam into hot jars and with lids put on it was left to cool, before labelling the next day.  Nine jars of Plum Jelly which now reside in the home preserves larder cupboard, and one in the fridge ... well you do have to sample the wares don't you ;-) 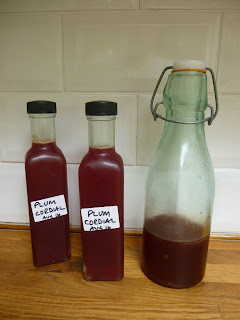 And in the fridge we have two and a bit jars of Plum Cordial, which is even easier to make.

Just add 350g sugar for every half litre of strained plum juice and heat in a pan until the sugar is dissolved, then bottle into warmed, sterile bottles and allow to cool.  It can be kept in a cool dark place for a couple of months.  If you want it to last longer you can continue and use the water bath method, but I doubt it will need to last that long in our house!!

Now we have one last picking of plums to do from the tree before leaving the last few for the wildlife and the chickens who are moving back to their original Chicken World later on tonight.  I'm not sure what they will become but it will add nicely to our little stash and keep us on our journey to fruity self sufficiency.