Tidying Up and Chasing Sheep 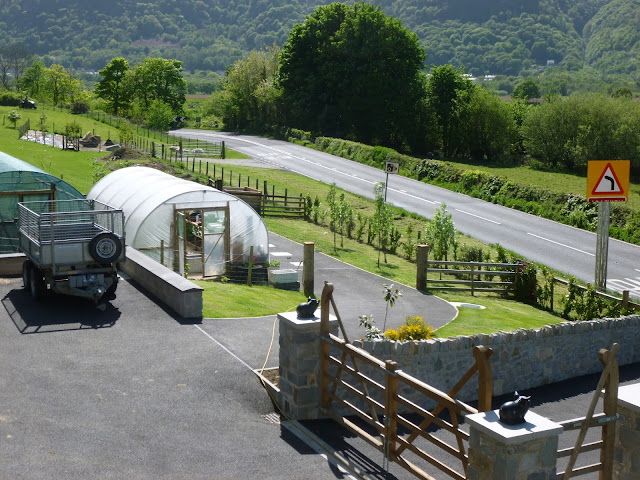 It's been a weekend of tidying up.  Cutting grass, strimming edges, cutting hedges and weeding.  There's lots more still to do but the old place is starting to look a bit neater around the edges now.

You can see on this picture that the trees to the right of the polytunnel are starting to grow and the Laurel hedge that is along the fence line is also starting to really put on some growth.  The trees and the Laurels, were what we had to put in place if we wanted to get the permission for the polytunnels granted.  Although if the council think that they are going to shield the polytunnel from roadside view anytime in the next few years they are very much mistaken!! 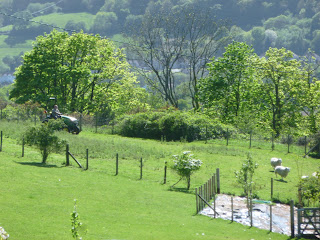 Yesterday Lovely Hubby was playing working with his tractor, after much messing about he got the grass mowing deck on for the first time this year, and chugged along to the end field that the sheep were in, he needed to cut down the nettles which were filling the centre section.

Ironically a couple of hours after he had been chasing the sheep around the field (not really ... the sheep soon got used to what he was doing and settled into one of the corners), Will their owner, turned up to move them into the main paddock for a couple of weeks.  They had eaten their way through the grass in the end field. 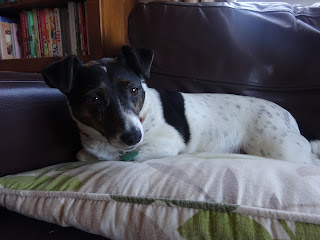 I picked Rosy up from the vets just after teatime on Friday.

The x-rays showed absolutely no problems with any of her bones so the vet thinks she has some deep muscle damage or a stretched or torn tendon.  She is on anti-inflammatories and pain relief, and she is supposed to rest for two weeks.  After the general anaesthetic she was very docile yesterday and very quiet after having the tube down her throat ... it's not like our Rosy to be quiet, she can bark more than any dog I have ever known.  So we had a day of peaceful  doggy silence, which felt very unusual, but gradually she's finding her voice again and letting the neighbourhood know that once again she's in charge of this property!!

It's nice to have her back, it's not the same on the old homestead with one of the family members missing.

I hope your weekend has been as productive and enjoyable as ours has.