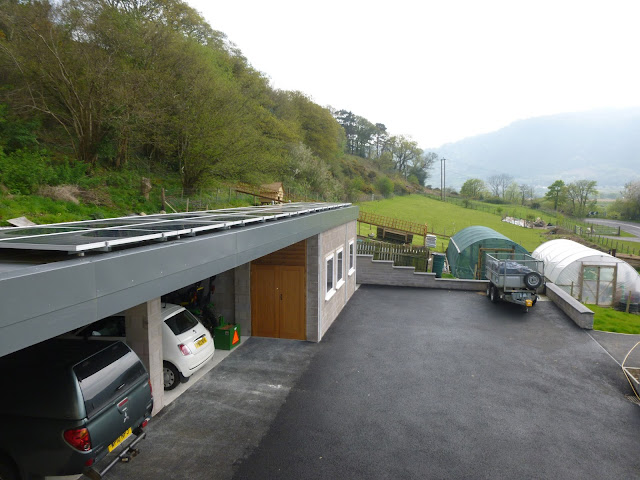 I left you hanging in the air at the end of the last post ... mainly because I had to go and get a photo of a little addition we have had to add to the new Chicken Land.

We have added some short trellis fencing to the top of the stock fencing that separates Chicken Land from the Veggie Patch and I'm sure you can guess the reason why.  The 'Welsh Girls' the four youngest, fittest of our birds have spent the last few days hopping over the fence to scratch about in the Veggie Patch, making a real mess of the bark chipping pathways and nibbling at the few veggies that are currently in there.

Not so much of a problem at the moment but it would have been a huge problem when I start to transplant the seedlings that I am currently growing in the polytunnel ready to grow on outside.

To stop them ... or so we thought ... we clipped their wings.  It doesn't hurt chickens at all, a bit like us clipping our fingernails, but what it does is make them lopsided and they find it harder to fly. Chickens don't like to fly much anyway .... unless there is a good food source just over a fence  :-) 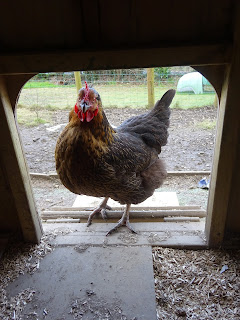 One of the culprits!!

We didn't realise how young, fit and agile three of our girls were, the day after we clipped their wings they just flapped and jumped and they were over the fence.  So alternative methods had to be thought of.  Luckily the way Lovely Hubby had fenced the veggie patch to separate it from the orchard included a horizontal rail at the top of the stock fencing, it was put there to help the fence posts remain rigid on a wet hillside.  So he has nailed and added supports to this and topped at all with the trellis fence topping panels that we went out and bought yesterday.

So now we will just have to see how high these three chickens can jump, up to now they have not made it over the newly raised fence .... but I have a sneaky suspicion they could be in meetings to plan the digging of a tunnel  ;-)