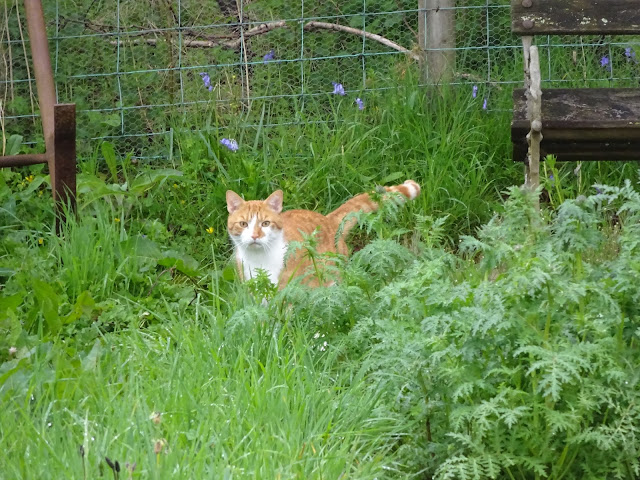 After taking the photo of Ginger through the net of the net tunnel I went out to play with him, he was on a 'mooching about' mission and darted here there and everywhere making sure I was never far away from him.  Some days he's like that ...wanting company, and other days he's a real loner, we just 'go with the flow'. 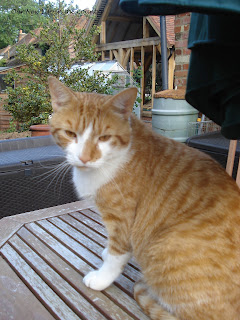 Ginger - 2012 when he was approximately two years old.

We 'took Ginger over' in March of 2012 when we rented our little bungalow in Berkshire.  His owners and their two young girls were going to Singapore for four years and were in a quandary what to do with their two cats, Ginger and Muffin.  We immediately offered to foster them while we rented their house and land and a deal was struck.  They got them both neutered so they wouldn't fight with our two neutered males and we would take over from there. 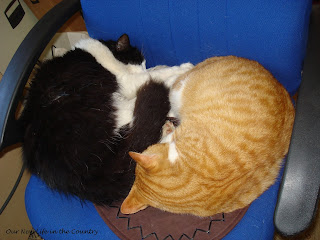 Archie and Ginger snoozing on Dad's chair and hat!!

It worked out a treat and after a couple of weeks of giving each other a wide berth Ginger, Archie and Toby hit it off, Muffin wasn't as keen and visited the house for feeding but kept himself to himself, living in the woods or spending time with the neighbours that he knew a bit more than us.  After a few months both Toby and Muffin vanished, we never found out exactly what happened to them but there were a lot of badgers in the woods with huge setts that perhaps the cats strayed into.

Ginger and Archie however developed a good bond and along with the dogs, Sophie, Rosy and Suky and the flock of chickens and the three Chinese Grey geese life was lively and fun for all of them. 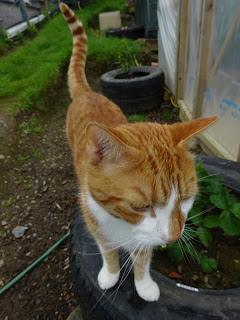 When we bought this house in Wales in September 2013 we knew Ginger had to come with us, so made an offer to carry on looking after him after our move.  After first suggesting that we leave him behind and the neighbours would feed him every now and then (yeah ... like I would have let that happen!!) his owners relented and said yes we could continue to have him, while they continued to live in Singapore. 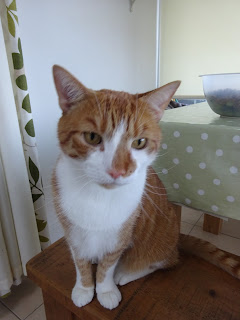 So he upped sticks with us in December 2013 and moved to North Wales where he has continued to live like a dog, hunt rabbits, mice and any other little creature that he can get his paws on and walks with the dogs round the paddock at least twice a day, no doubt to the astonishment and amusement of the cars and coaches that whizz pass the house. 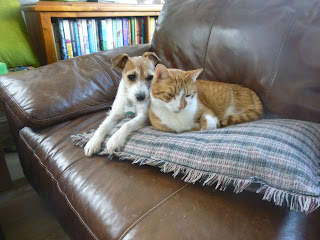 He is the friendliest and most laid back of our animals and can be found snoozing with his best doggy friend from early evening to bedtime on the sofa ...

... and during the day on our bed with the same furry friend. 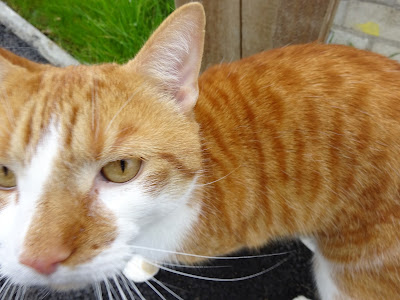 I doubt we will ever give him back even if they ask, they've been back in this country for months now and haven't been in touch, so Ginger is now very much OUR cat.  After all he's spent most of his six years with us and his chums the dogs and chickens, I doubt he could go back to being a solitary cat. 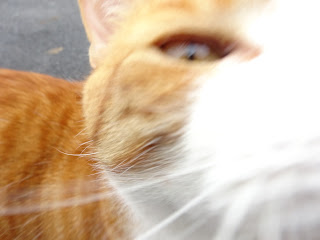