I Love My Polytunnel 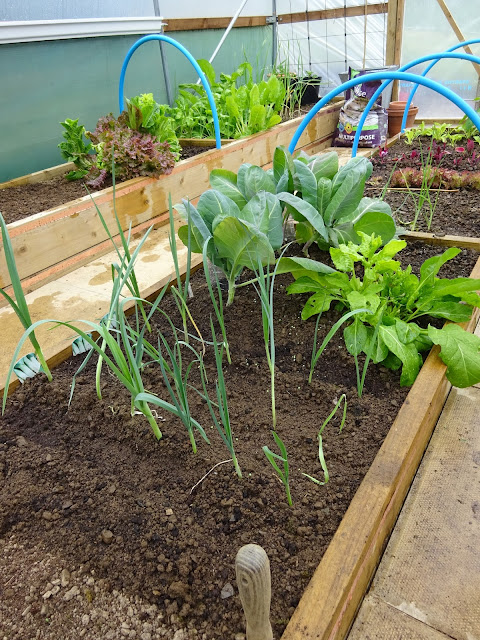 In the polytunnel at the moment is a lovely green mish mash, a delightful mix of new seedlings, old over-wintered plants, things being shifted around and new life springing up either planted by me or self seeded from last year.

The young Leeks at the front of this bed have just been moved over from a larger bed under the work station.  They were taking up far too much room and water spread out as they were, so I decided to re-locate them ... they seem to have survived the trauma!! 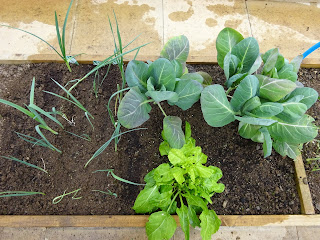 A top view of the same bed ... Leeks to the left, spring greens at the top and a spinach cluster at the bottom. 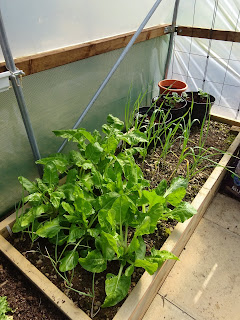 I seem to be making more and more mixed beds at the moment.

I think I like a bit of variety, and I love the mix of the greens and the difference in the  leaves and stems.  It's not really seen as the right thing to do in growing circles as you are supposed to rotate where you plant things and this makes any rotation harder to do.  But I prefer to rotate less and look after my soil and compost more and let the plants mingle.  I may live to regret it one day ..... but hey that sums up life in general, right  ;-)

This bed has a row of onions (a trial polytunnel/net tunnel thing) a few rows of late planted spinach from last year and some garlic, which is also being trialed in the polytunnel to see how it compares to the net tunnels garlic ... 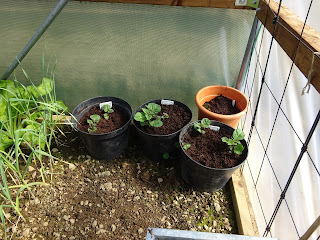 .... and in the pots in the back corner some potatoes (Estima) taken from last years crop. 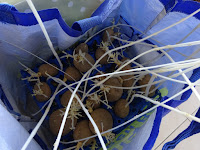 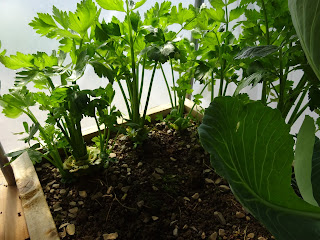 In the very back corner on the other side, under my workbench are last years celery plants.

Instead of pulling up some of the bunches by the roots I chopped them off just above soil level and as you can see they are growing into another bunch of celery.  This is proving to be a useful thing to have learnt as having this second early batch of celery growing is helping to fill what is known by growers as the 'hungry gap', that annoying time of year when you have eaten most of last years crops and although you have tray after tray  of lovely young seedlings of all your favourite vegetables coming along,  there just isn't anything tasty to actually eat now, something I really don't need to happen on our journey to self sufficiency.

There are quite a few vegetables and salad crops that will do this - cabbages, lettuces, spring onions  and as you can see celery, I think I am going to experiment some more this year with this phenomenon, an extra crop from one sowing of seeds is always welcome.

The weather fluctuations of this week have seen the temperature in the polytunnel plummet to just 4 degrees and then rise in less than twenty four hours to 35 degrees.  When I'm working in there I peel off the layers as it's gets warmer and warmer, usually ending up working in just a T shirt even when the temperature outside is still jacket weather.

Can you tell I love my polytunnel  :-)