Not For the Squeamish 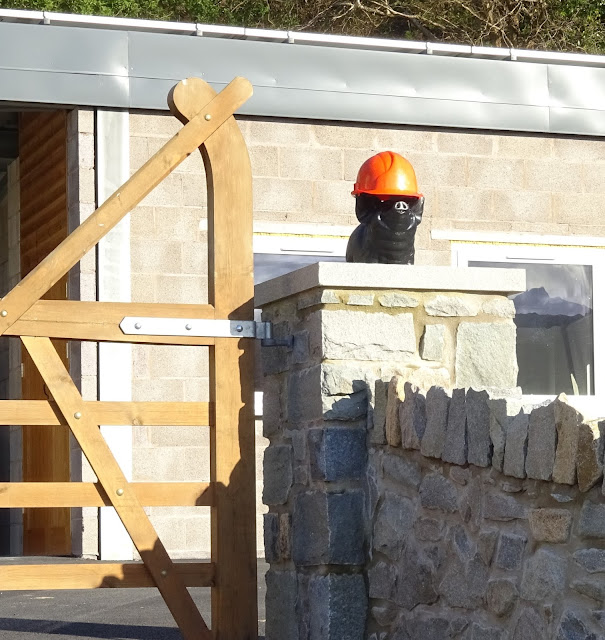 The gatepost piggy is wearing Lovely Hubby's hard hat ....  if only he had been wearing it a little bit earlier he wouldn't have done this .... 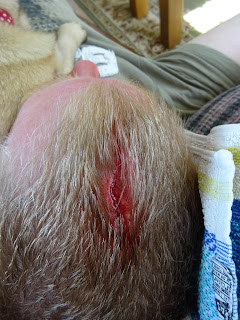 ... it's deep, even deeper than it looks on this photo.
He was almost concussed but managed to stay sat on the grass until he recovered enough to come to the house and tell me what he'd done.  I couldn't have missed the fact that he'd hurt himself he had blood everywhere.

How did he do this  ... well he was using one of these, a post knocker inner thingy to get the posts in to hold up his new  large manure holder/compost bin style thing, and on the forceful downward stroke he got it a smidge wrong and it hit the edge of the post and bounced back right on top of his head.

When I Googled the words 'post knocker inner' to get you this image guess what there were lots of on the same page ....

... photos of our chickens!

Lots of shots of our chickens ... 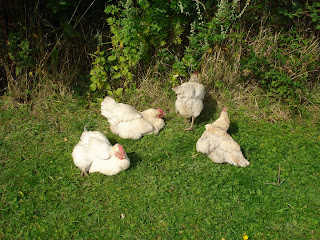 And one of our paddock before the Veggie Patch was there or the polytunnel ... I understand why this photo was there, this is the tracter with the post knocker inner thing attached from when we had all the paddock fencing done!

His head is healing very nicely now and although he refused to go to A&E for the stitches that he should have had, he did eventually get it checked out while he was at the Dr's last week and was told to carry on keeping it clean and dry.

He banged it again a couple of days after doing it ... he was only wearing his flat cap for protection, hence he was finally persuaded to dig out his hard hat and wear that for any jobs where there was anything over his head that he could bang it on.