Mother Goose died during last night, peacefully and cuddled up against one of the large Black Marans in one of the nesting boxes.  Her friend did such a good job of keeping her cosy that even though her body was stiff it was still lovely and warm when Lovely Hubby gently removed her from the henhouse.

She came into our lives on the 17th June 2012, when we bought her along with her babies, the three goslings you see in the photo.  Rather strangely and something I have just rediscovered looking back through my diaries she was bought at the same time as the hen she cuddled up to last night.

I wrote THIS post about her and her babies when they had been with us for a week. 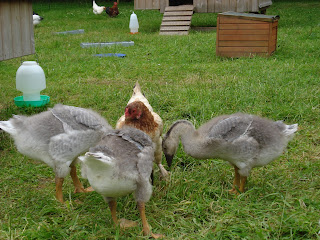 Of course her babies grew much bigger than she was!! 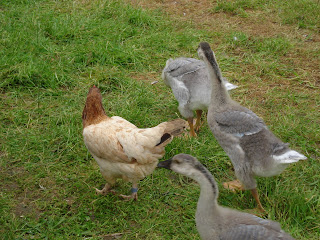 She was a brilliant Mum to the geese and this is how she got her name.   I remember clearly the look of consternation on her face the first time they all dived into a big bowl of water and started splashing about.  She told them off in no uncertain terms but eventually got used to her huge wet offspring.  She also found it strange that she could never teach them to roost on the bars in the henhouse, but once again she soon got used to their strange ways and left them sitting near the door of the henhouse on the floor while she sat above them on the perch. 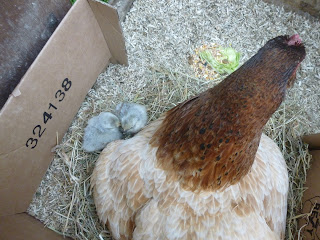 Last years babies were so much smaller ... she was Mum to Jack and Jill the Lavender Pekin bantams, a much easier little family to raise without the worries of her first brood. 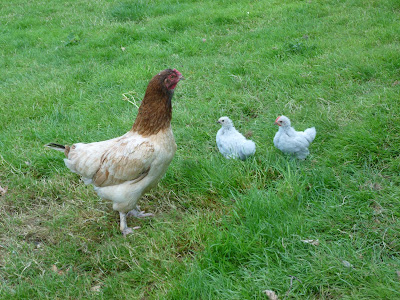 We don't know how old she was when we got her, I guess she was at least two years old, so that would make her in the region of six years old, not too bad an age considering the high stress life she led.  She was always 'in charge' even the cockerels saw her as 'head chicken' and would leave her well alone, she bossed everyone else around at feed times and bedtimes and generally was on the go from first thing in the morning until I shut the door on the henhouse each night.

She spent Friday in the polytunnel with me, warming her old bones and feasting on worms and spinach and then yesterday she was back with the flock basking in the afternoon sunshine over in our new chicken world in the orchard.  At one point I thought she had keeled over and died, and I went into her but she was merely lying down with her wings outstretched gathering all the heat of the sun, I felt so guilty for disturbing her.

Another sad day but she lived life to the full surrounded by her chickeny friends and had a wonderful last few days.  So in total  during the month of April we lost three of our girls. Enid, Daisy and Mother Goose.  Chicken Land is a quiet place today, for once Jack isn't to be heard crowing in answer to the neighbour cockerel, and the girls are mooching about in a really calm, quiet and unusual way ... I think they are feeling the loss as much as we are.

RIP Mother Goose - you were a unique and very special hen, it was a privilege to have known you.