Eating Through the Stores 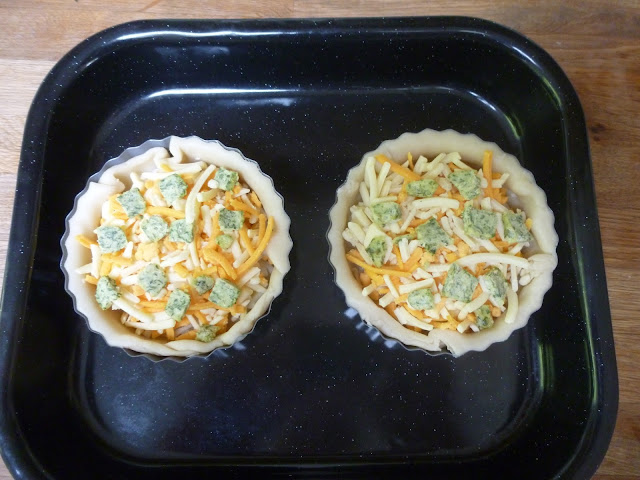 When I am here I have been harvesting from the polytunnel and eating fresh salads alongside the veggie options that I have in the freezer.  I had no idea that I had so many Linda McCartney veggie sausages, I have eaten them until they are coming out of my ears and still I have about four boxes left.  They were obviously on a very good offer a while ago!! 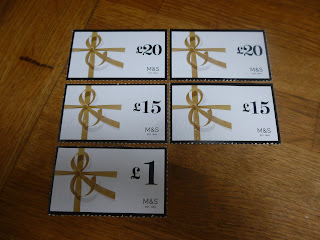 None of the vouchers have been used yet, but I think one will have to be this week as I need a few fresh things. 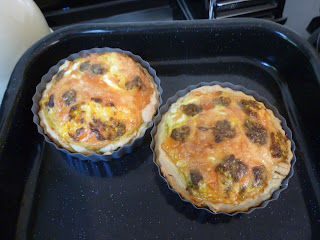 The little quiches in the top picture and here, are made up of things from the freezer, a sheet of frozen shortcrust pastry ...

a handful of the mixed grated cheese (Cheddar and Red Leicester) and a couple of sliced Basil Pesto cubes, with a whisked up freshly laid couple of eggs poured over and baked in the oven for 25 minutes they made for a lovely couple of meals. 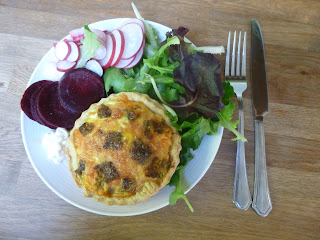 Once with leaves and radishes from the polytunnel alongside some home pickled beetroot from last year and then again the next day with a handful of frozen chips. 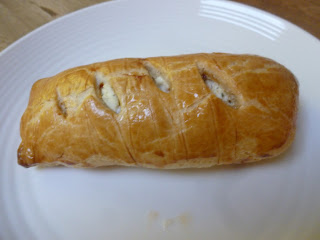 The left over pastry was balled up, wrapped in clingfilm and left in the fridge overnight while I had a think about what I wanted to make next.  I decided on a mini Salmon en Croute.  A salmon fillet from the freezer, thawed and then topped with a tablespoon or two of garlic and herb cream cheese, also baked for 25 minutes and eaten with more of the mixed leaves from the polytunnel.  Very tasty!!

And seeing this explains to me why I've not really had to shop yet this month.  Most other meals have been similar to these, mixing ingredients from the freezer, cupboard and polytunnel and coming up with varied and very tasty meals.  But all the milk from the freezer is now either used up or in the fridge so I will have to shop this coming week once the big bottle in the fridge runs out, after all we have to keep the workmen happy!!

There are also things we are simply not replacing ... the biscuits are nearly all gone, when they are they will stay gone.  There are no chocolate bars in the house, save for a couple of large blocks of 85% dark chocolate, which we eat square by square rather than bar by bar, we have decided just don't want to carry on eating biscuits or chocolate bars at the moment.  We have no more potatoes in the bag in the cupboard, but the ones in the polytunnel should be harvestable in a couple of weeks, there is very little frozen spinach for our morning Nutriblasts, but as I said above the perpetual spinach in the polytunnel has gone rampant and that is in daily use now for them.  Once the apples and pears run out I will move onto the frozen fruit that we have as back up.

So we really are doing pretty well on our mammoth use it up marathon.