The Veggie Patch in June 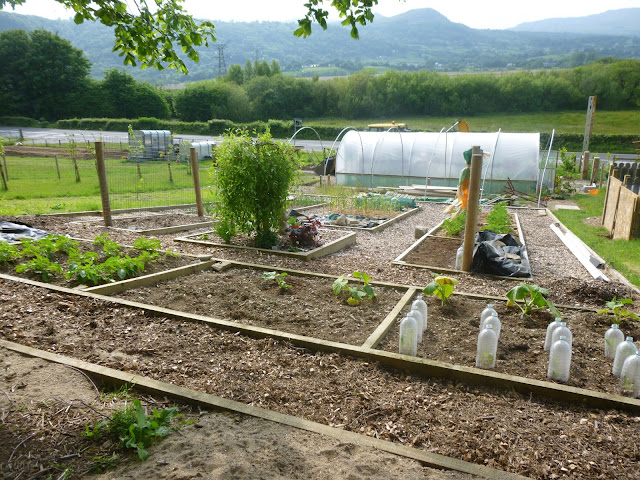 I've been asked a couple of times for photos of the Veggie Patch, so here goes.

This is the view from the bench and by the time you've carried a few watering cans up the hill as I have been doing this morning you need the bench.

I don't always water with the watering can, but I have our 6X feed in the trough in the polytunnel and I'm gradually working my way round the outside beds feeding the soil with this lovely nutritious drink and then covering with mulch to keep in the moisture.  We've not had any rain for almost two weeks now and with lots of young crops on the parched hillside I'm just doing my best to keep them alive. 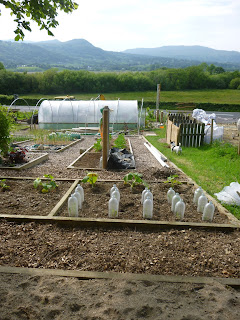 The 'pop bottle' crop is Sweetcorn, after I took the photos this bed was watered and mulched, I think I will risk taking the pop bottles off later on today, they are simply used as mini cloches to keep the plants a bit cosier at night after first coming out of the heat of the polytunnel if I've not hardened them off.  In front of  the Sweetcorn in the same bed are some Pumpkin plants, and then in the bed further down with the bean support I have planted Runner Beans and Butternut squash.

Planting tall or climbing plants, for example beans, sweetcorn or peas with a sprawling plant such as Courgette or Pumpkin means that the sprawling plant covers the soil keeping in moisture and anchoring the tall plants.  This is part of the 'Three Sisters' method of planting that I first wrote about HERE. 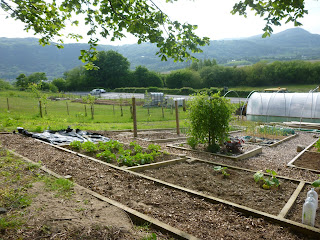 Two more Pumpkin plants are in the next bed and there is some space over for more Butternut Squash which I am just hardening off ready for planting out.  The bed to the left has got First Early Potatoes, the ones I got from the Pound Shop.  They are lovely healthy plants but still quiet small.  I need to feed this soil a lot more I think and carry on with the mulching.  The end bed is still covered over with membrane, it was going to be more Sweetcorn but my other batch of plants didn't appear .... dodgy seeds I think. 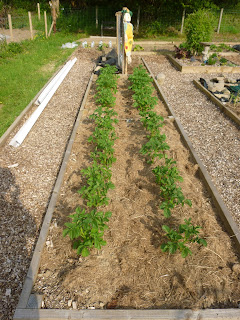 The view looking up the hill at the same part of the Veggie Patch, which shows the two beds of Second Early Potatoes lower down the hill than the Bean bed. 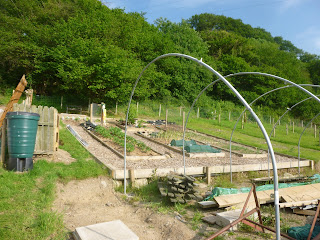 Looking up the hill through the net tunnel frame. 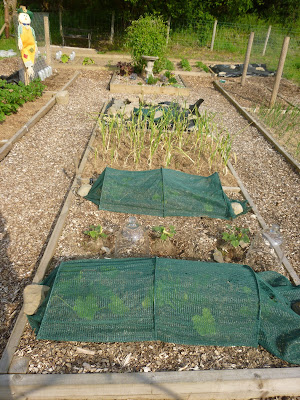 The centre beds have Courgettes under the net cloches, then it's the Garlic bed and behind that an as yet unsed bed covered in membrane to keep the weeds out. 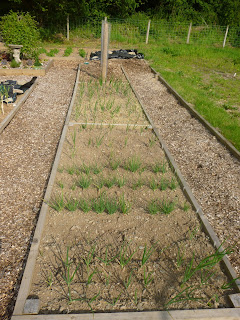 The right hand beds have Red Onions, White Onions and Shallots.  This picture was taken before I watered and mulched and you can see how parched the soil is.  The bed with the bean support has Runner Bean seeds in, but I don't think they are going to come to anything so I will add some more seeds up there while there is still time. 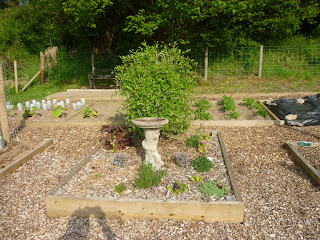 In the centre of the Veggie Patch is Dad's Bed, a two metre square patch of flowering plants to attract the bees and pollinating insects.  Another day or so and the Poppy plant in there will be in full bloom the buds are on the verge of exploding open.  The tree is magnificent this year, lush, green and very healthy and the bird bath is very necessary for visiting birds and bees.

As you can see most of the crops that I have planted in the outside beds are the sort that rabbits and other creatures would not find too appetising, and my plan seems to be working.  Having planted the garlic and onions first seems to have set a precedent and they have obviously decided that this is all that's available on this part of the hill, so they have stayed away .... up to now!!

Soon there will be the net tunnel for the more 'rabbit tempting crops', salads, lettuce, cabbage cauliflowers etc, but for now all I can do is bide my time and wait for it to be finished, we have so much going on it's slipped down the order of importance :-(

I'll be back out in the Veggie Patch later to do some more watering and mulching, but for now it's too hot out there and even hotter in the polytunnel,  hence I can have a quiet hour with a coffee or two on the computer while the washing machine does it's thing downstairs.