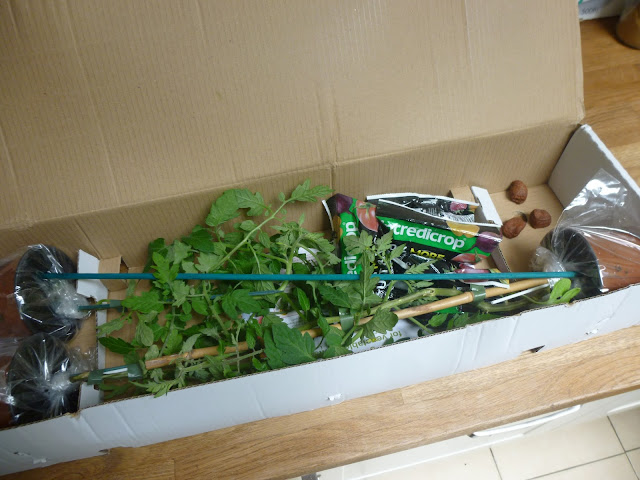 The interruption to yesterdays blog writing was when the postman brought these to the door.

My three Tomtato plants, ordered from Thompson and Morgan here.  Mine were on special offer at three for £19.99, so a bit of a bargain too.

I've heard that you get a full crop of good tomatoes but not as many potatoes as you would on a single potato plant, but I don't mind that, it's more about the trialing something new for me and with this being my first year back growing our own food on any scale I thought I would treat us  me. 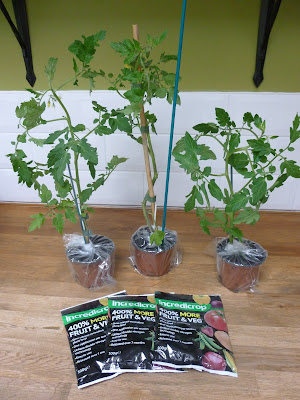 They came with three packs of plant food, I'm not sure I will need this much according to the instructions on the packets, but it's handy to have it in.  I think if they work out it would be a good plant for someone with limited growing space.  So I'll keep you posted on how they do. 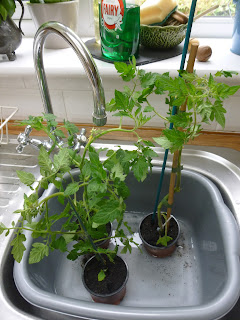 While I finished the blog post the Tomtatoes had a rest after their journey, having a nice drink of cold water in the sink.  (Spellcheck hates this new word, and is insistent that they are tomatoes ..... still it knows it now.) 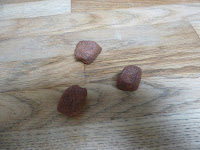 And did you notice three unusual objects in the top right hand corner of the parcel .... they are dog treats. 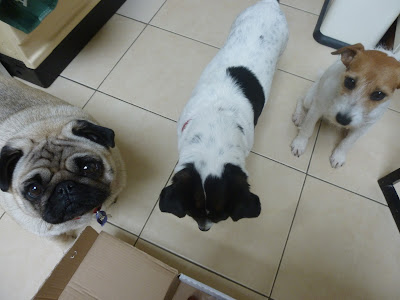 I started this when Rosy was a pup to discourage her from running up the farm track after any delivery van as it drove off, by making out the parcels always had something for her as well as me in them she was eager to dash back into the house while I opened them.  She actually watches me now get the treats out of the packet they are kept in and drop them in the parcel .... but she still plays along with the game :-)

Suky's face just says it all doesn't it ..... "Mum why are you photographing the treats when we usually just get to eat them?"