My Last (on purpose) Meal With Cream 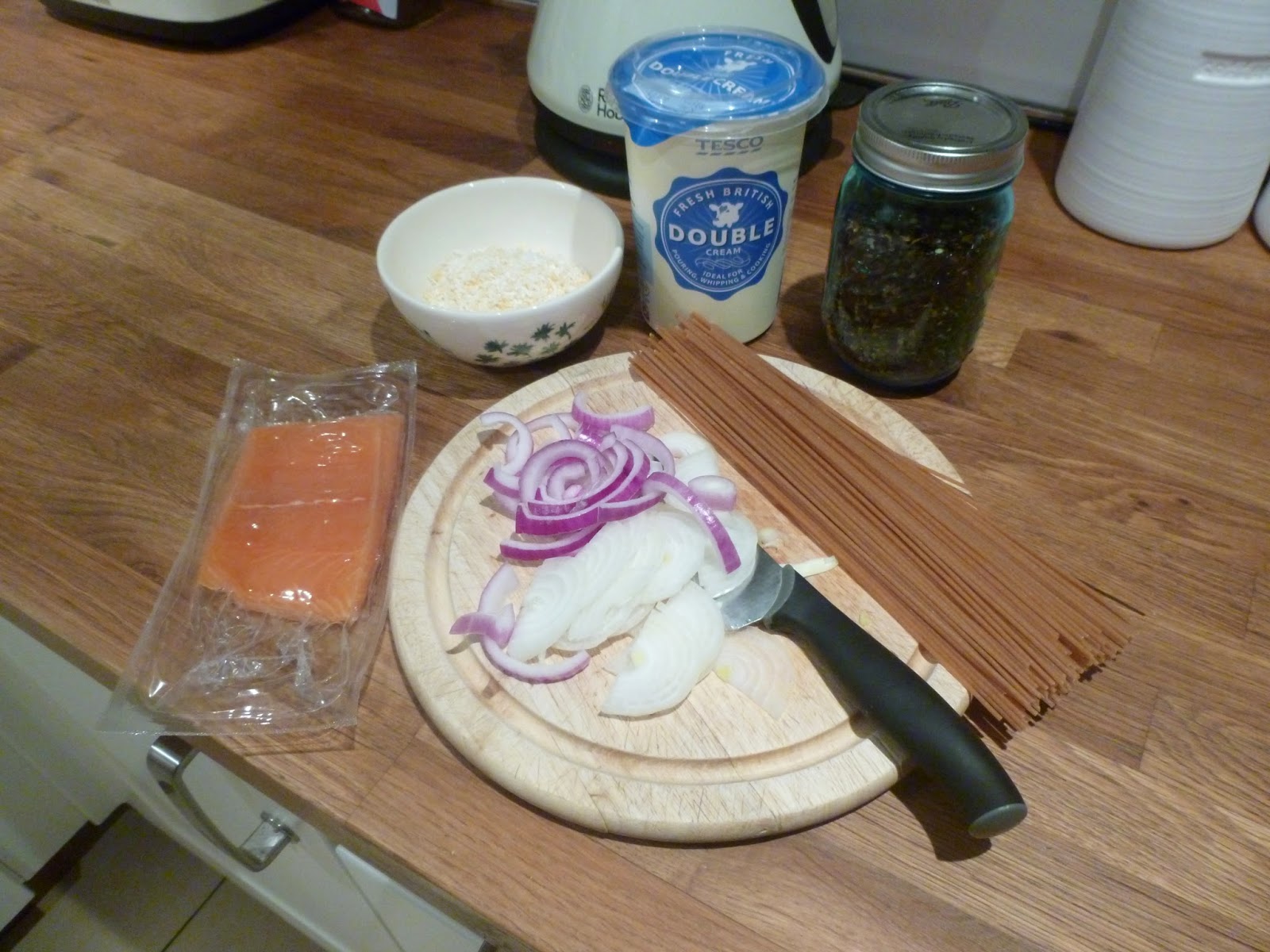 This is photographic proof of my last meal made knowingly with cream.

Whether this will be forever or just for a few months I have no idea, but I'll not be buying any cream again in the foreseeable future.  No doubt eating out, or some other such eating away from home  occasion may see cream slip into my diet ..... but it won't be on purpose.

It was supposed to be just a run through of  photos of one of my favourite recipes for a blog post, one that I've not eaten for a long time, but as it turns out it's photographic evidence of the last tub of cream that will be gracing the shelf in my fridge. 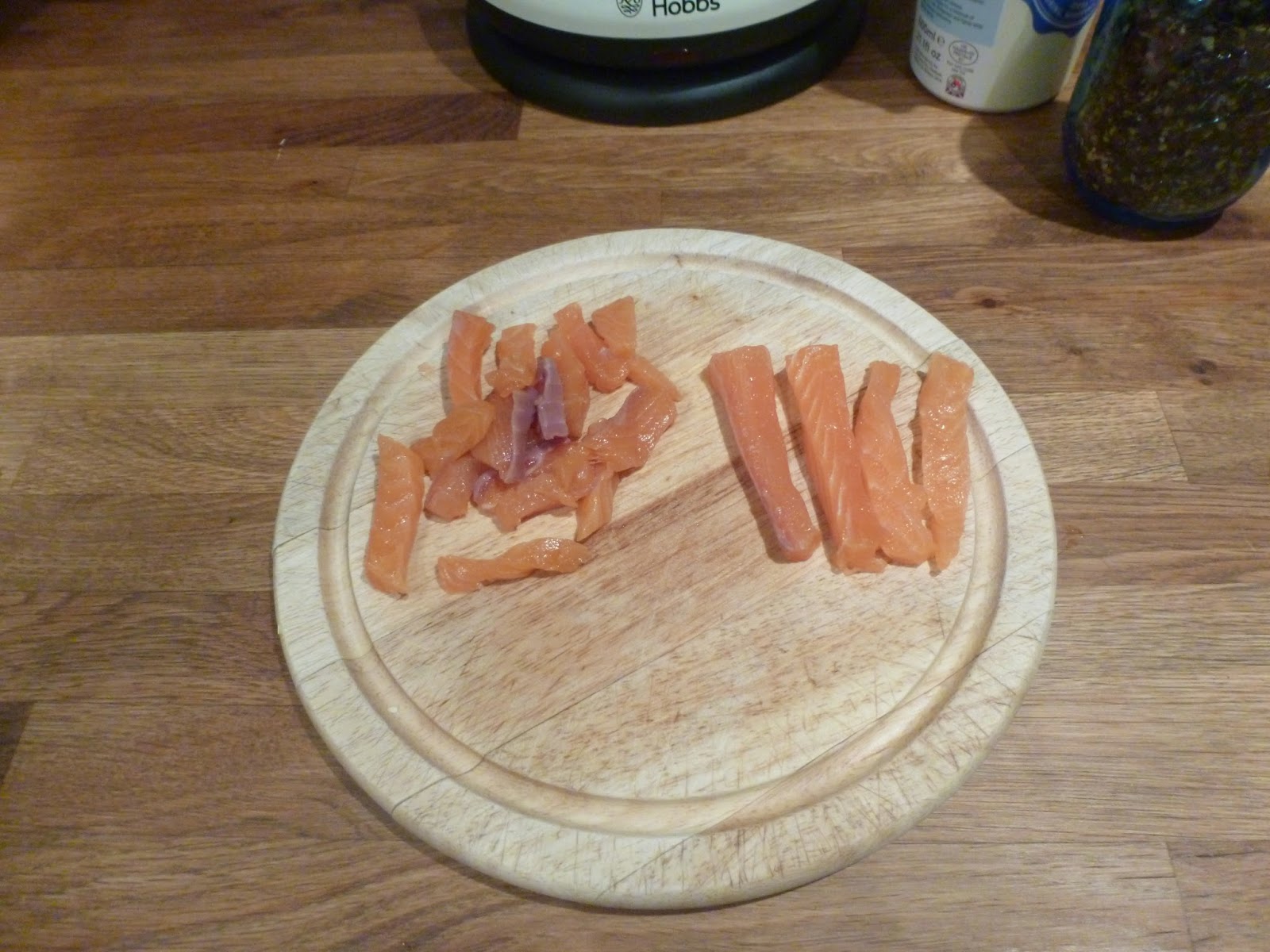 I looked at the ingredients after taking the first photo and decided that a whole salmon fillet, even though it was a relatively small one, was just too much to use for one simple pasta dish.  I seem to have my 'Frugal February' head on at the moment, so I decided to cut it into pieces for that nights pasta dish and a couple of strips to be used the next day.  Suzy flashed through my head and her brilliant blog Sudden Lunch, so I decided some purposeful leftovers were the order of the day. 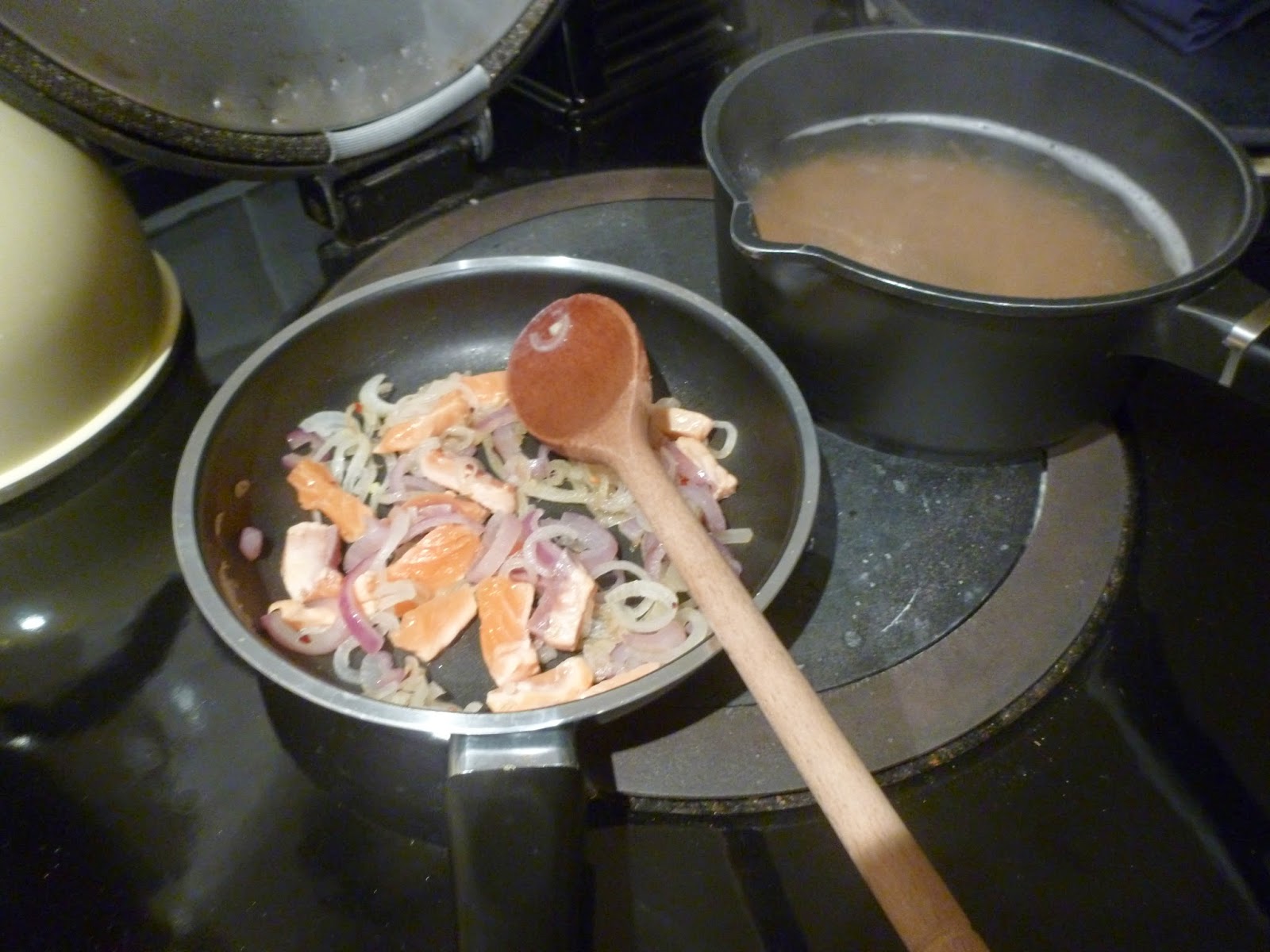 While the brown spaghetti bubbled away in one pan, I 'fried' the onions in some water and then added the chilli flakes and after five minutes the salmon pieces in the other. 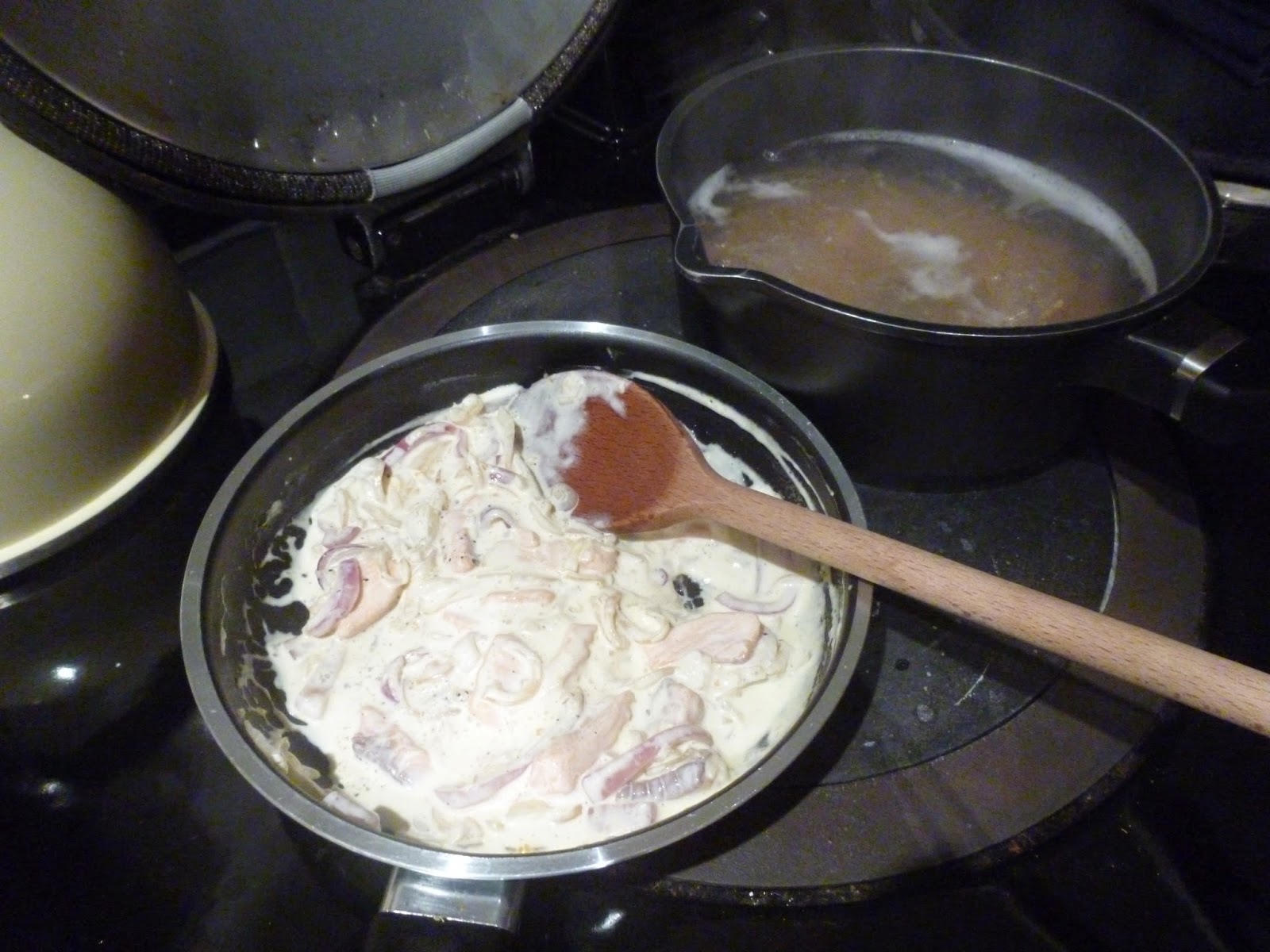 I added the cream, not knowing then that it was to be for the last time, a dash of lemon juice and gave it all a good stir just before I added the now cooked spaghetti and a good splash of the cooking water to thin the sauce down a bit.  Then Parmesan style cheese was stirred in. 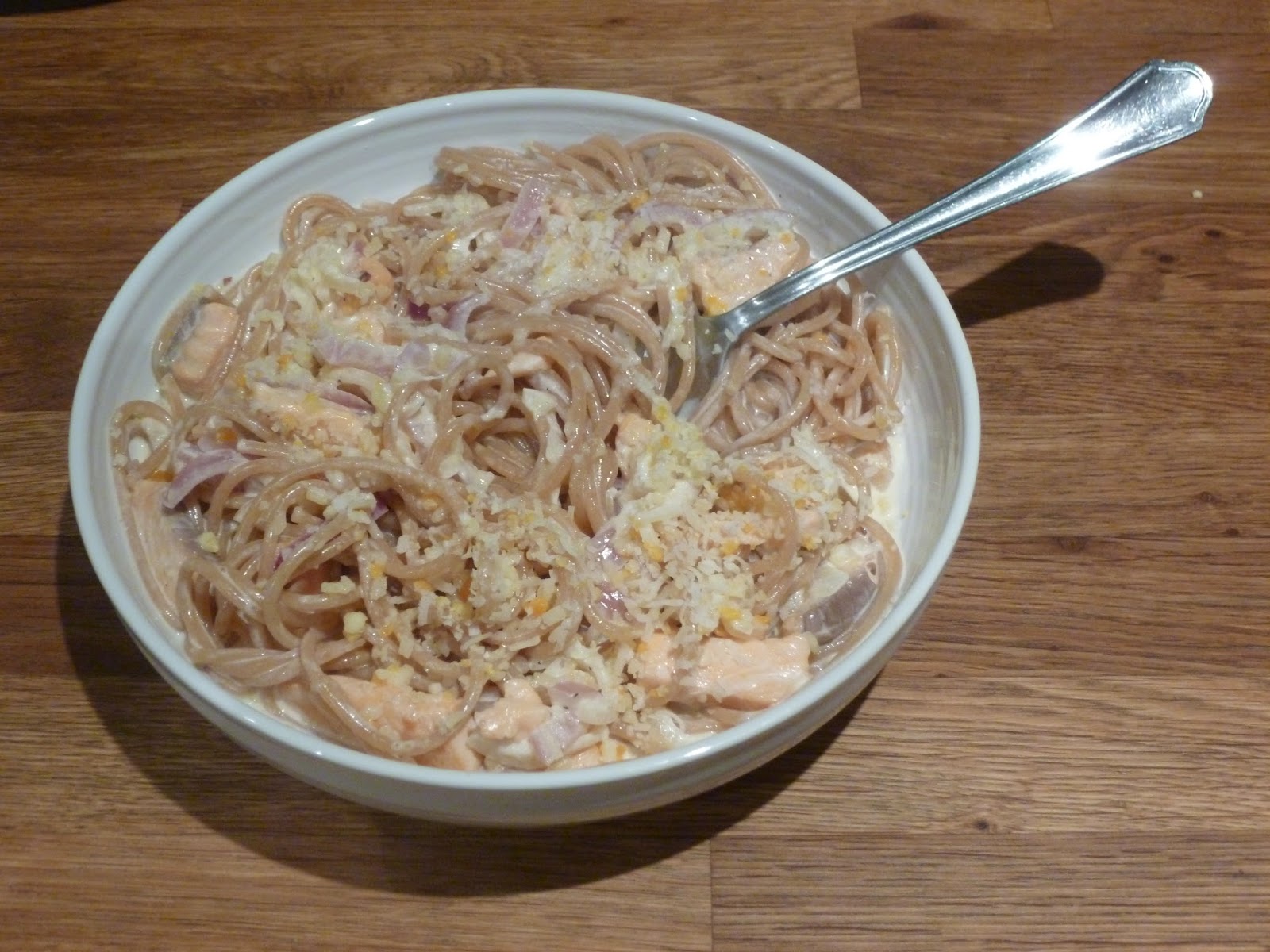 The finished meal was lovely and extremely tasty.

It would have looked so much better with some colour, a handful of frozen peas or some broccoli would have enlivened it no end, but I completely forgot until I came to take the photograph and realised how dreary it looked!!

Within an hour of eating it I was sorry.  I was hot, so much so that I thought the chilly conditions outside the house had lifted and the milder weather was back.  I stepped outside on the patio and saw the frost on the grass, saw my breath as I spoke to the dogs .... who thought this impromptu breath of fresh air was brilliant, and I realised that it was just me that had warmed up not this little portion of North Wales.

I sat in a glow of warmth, that meant not many logs were burnt over the course of the evening, all the internal doors were flung open to allow the heat from the log burner to diffuse over the whole house, and I sat drinking ice cold water ... lots of it.

By bedtime I was still feeling uncomfortably full, slightly heartburny (nope, I know that's not a word but it makes sense to me) and generally just YUK!!

I lay in bed hand on tummy, which by now was gurgling dramatically, as if telling me off for putting it through this upheaval, and read through some of my current healthy lifestyle books.  I've listed them in the sidebar, with links to their Amazon pages so you can read some more about my current reading, but I'll talk about my current favourite tomorrow when I'm a bit further into it.

I still felt yuk when I turned off the bedside light at midnight. 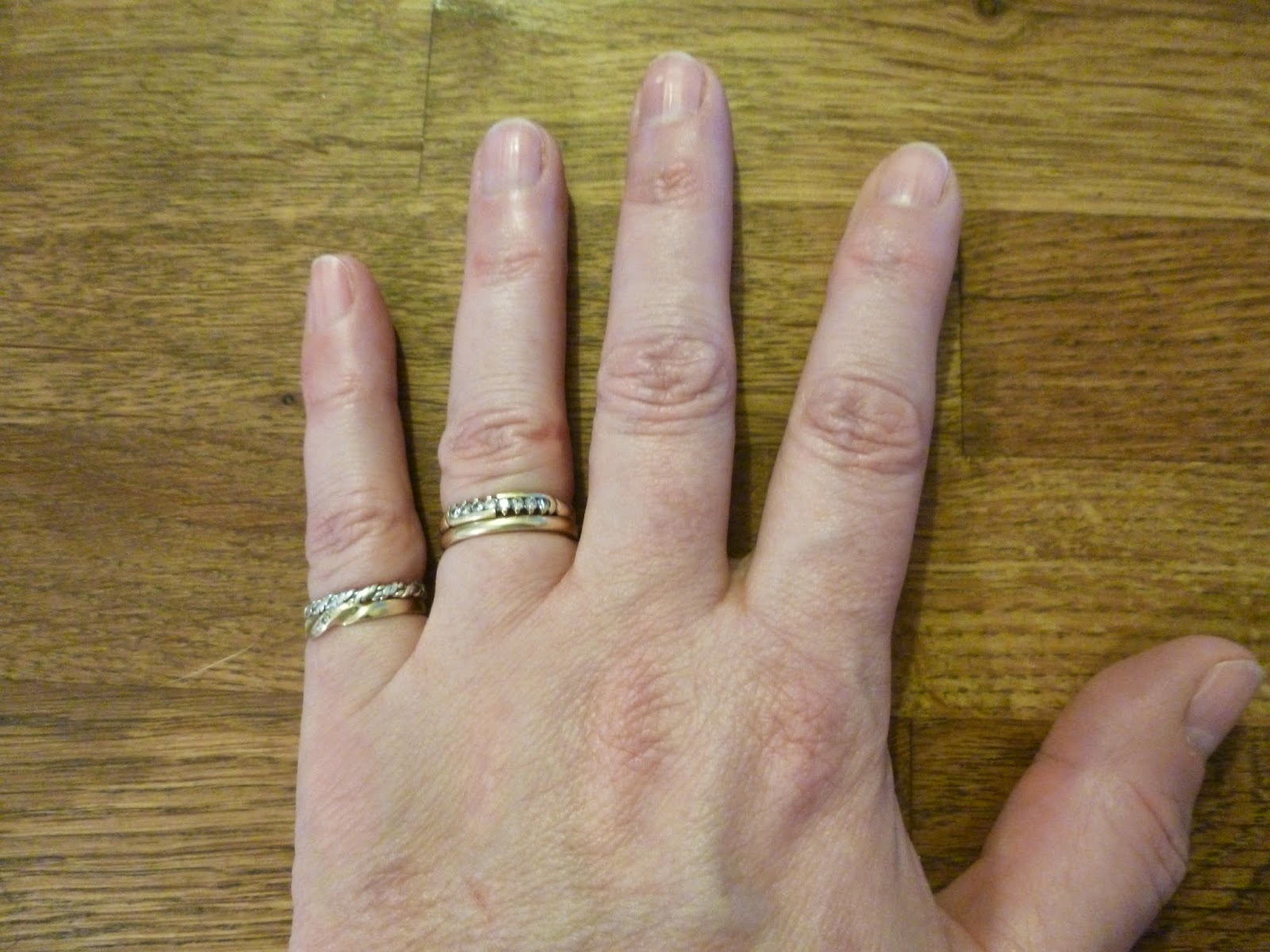 This is what I go off when I've eaten the wrong foods.

Suddenly my wedding and engagement rings are really difficult to remove.  To get them off I would have to put my hand under warm soapy water and tug.  Usually if I'm feeling good, have been eating well or am just frozen to the marrow, they slip off comfortably when I want them to.  Not too loose to lose but they just slide off with a gentle pull.

I react quickly when I eat the wrong foods and it takes me a day or two to get over them, today I can still taste the creamy pasta sauce, most likely that's all in my head, as I have cleaned my teeth three times since I ate it and drank copious amounts of water and black coffee.  Maybe it's my brain implanting in my head the knowledge that me and cream just do not get on.

So no more cream, I have already cut right back on wheat, I have found with previous experimentation that I can eat just one wheaty thing a day and feel okay, anymore and I have similar symptoms to above but without the blocked up nose.  Oh ... I forgot to mention that didn't I !!

Around fifteen minutes after finishing my tea I was blowing my nose for England (or should that be for Wales).  This morning I sound like I've discovered a penchant for nose pegs .... and there are lots more tissues available in the bin for starting the fire tonight.

So off my menu now -

Milk
(not used since last August)

Wheat en masse
(I can get away with once a day)

Sorry if this has been a rambling and possibly boring post for some of you, but as this is my diary I needed to get it down to remind myself in the future.  (That's how I know I gave up milk last August and meat way back in January 2011 .... by hopping back in the archives,)