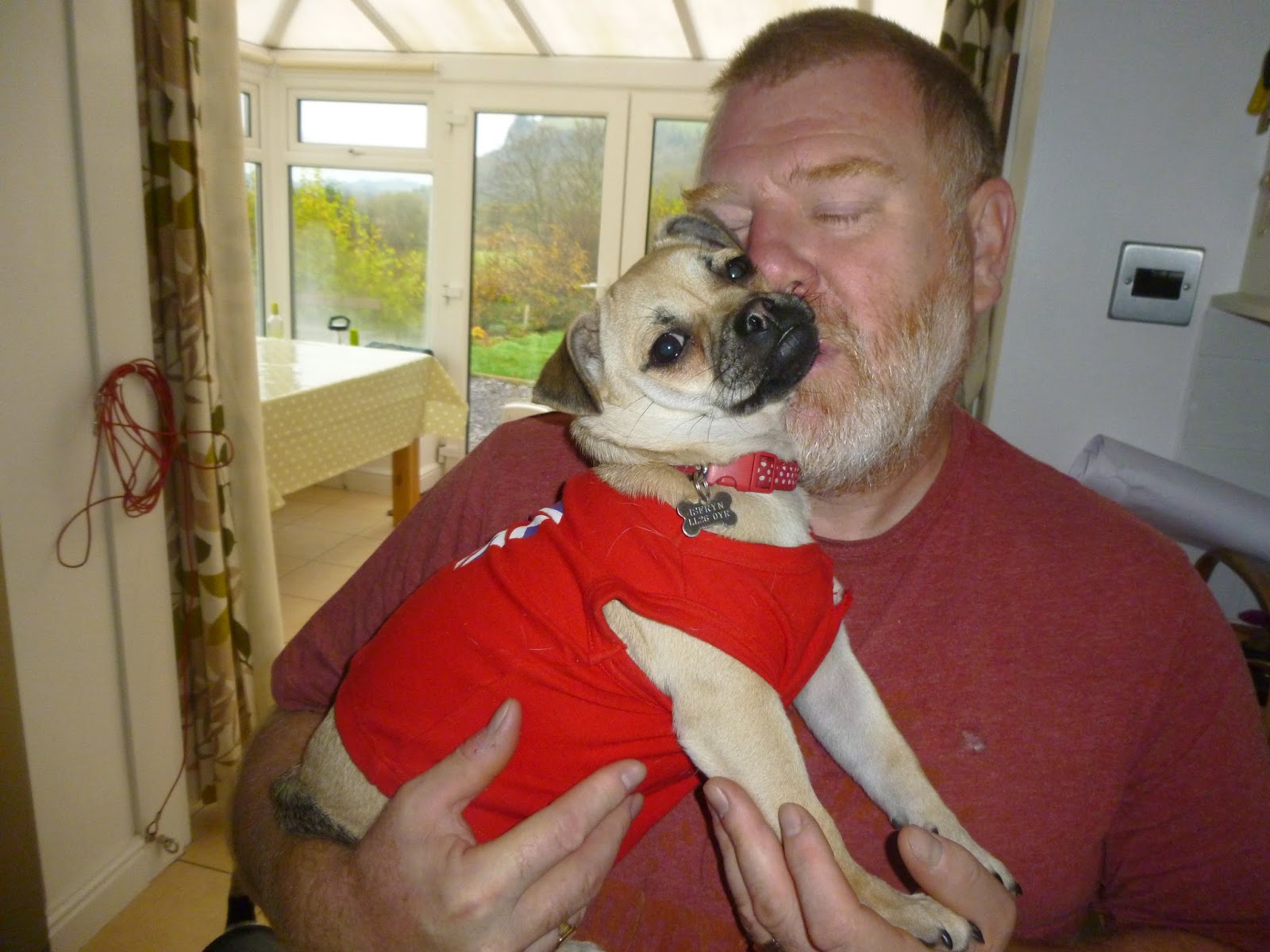 Lovely Hubby and Charley have obviously formed a mutual appreciation society all cuddled up and posing for the camera.

We got out the 'doggie dressing up box' on Sunday to see if we had a suitable T shirt for Charley who is booked into the vets for next week to be spayed.  T shirts are so much more comfortable for dogs than having to wear the plastic cone around their necks in my opinion, and as long as she doesn't chew at her stitches she won't be made to wear a one, her little T shirt will do.  It used to be Rosy's so it's a real 'big sisters hand me down' which I love. 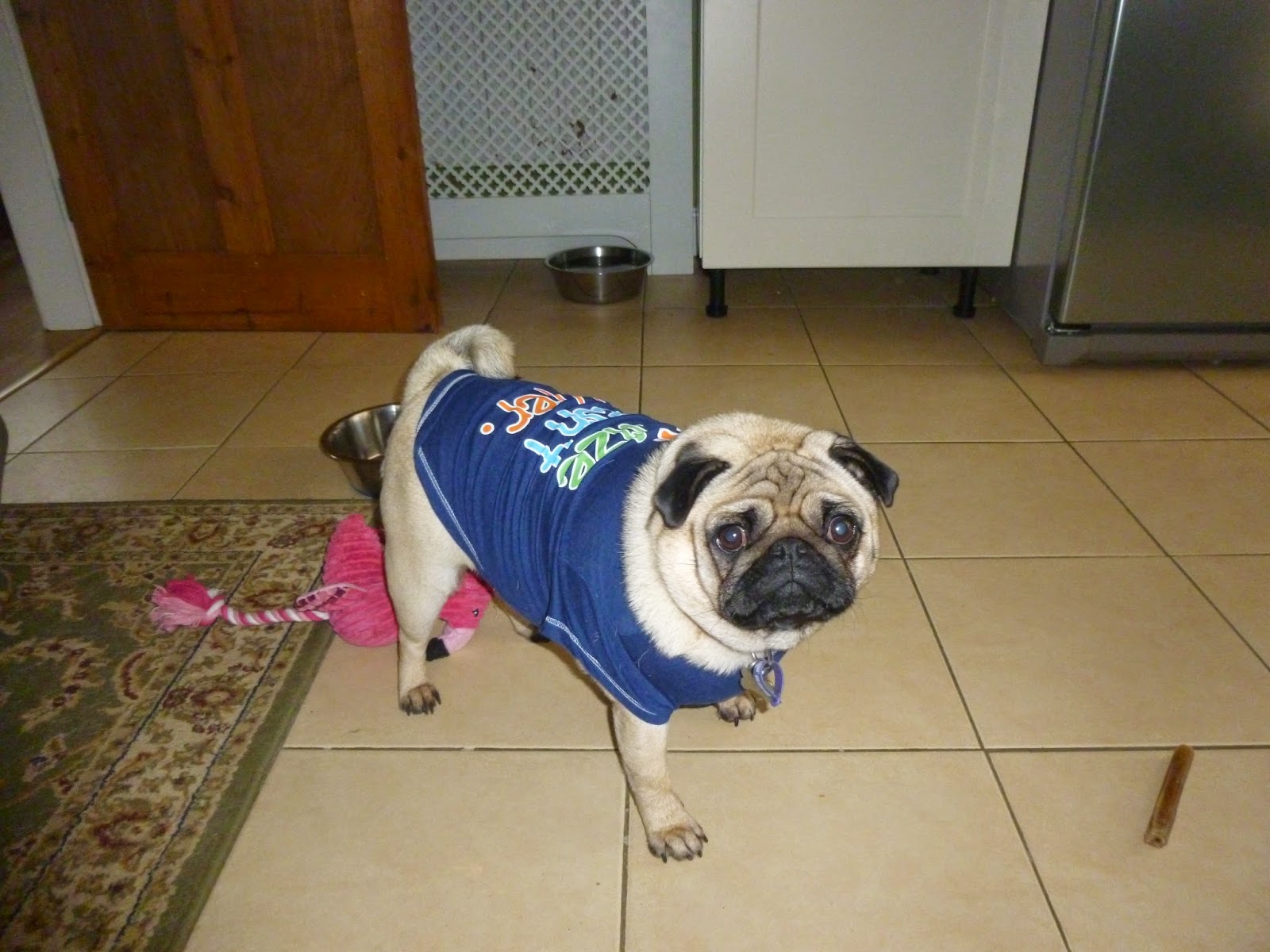 Getting in the doggy dressing up mood we thought we would get them to model what the box turned out to contain.

Suky is modelling  her 'spaying' t shirt, it says 'Size Doesn't Matter' which I thought highly appropriate.  It still fits her now because she was spayed at just over a year old when she was fully grown, which the vets we went to at the time seemed to prefer.  I prefer it done before they have their first season, but we went along with what they said. 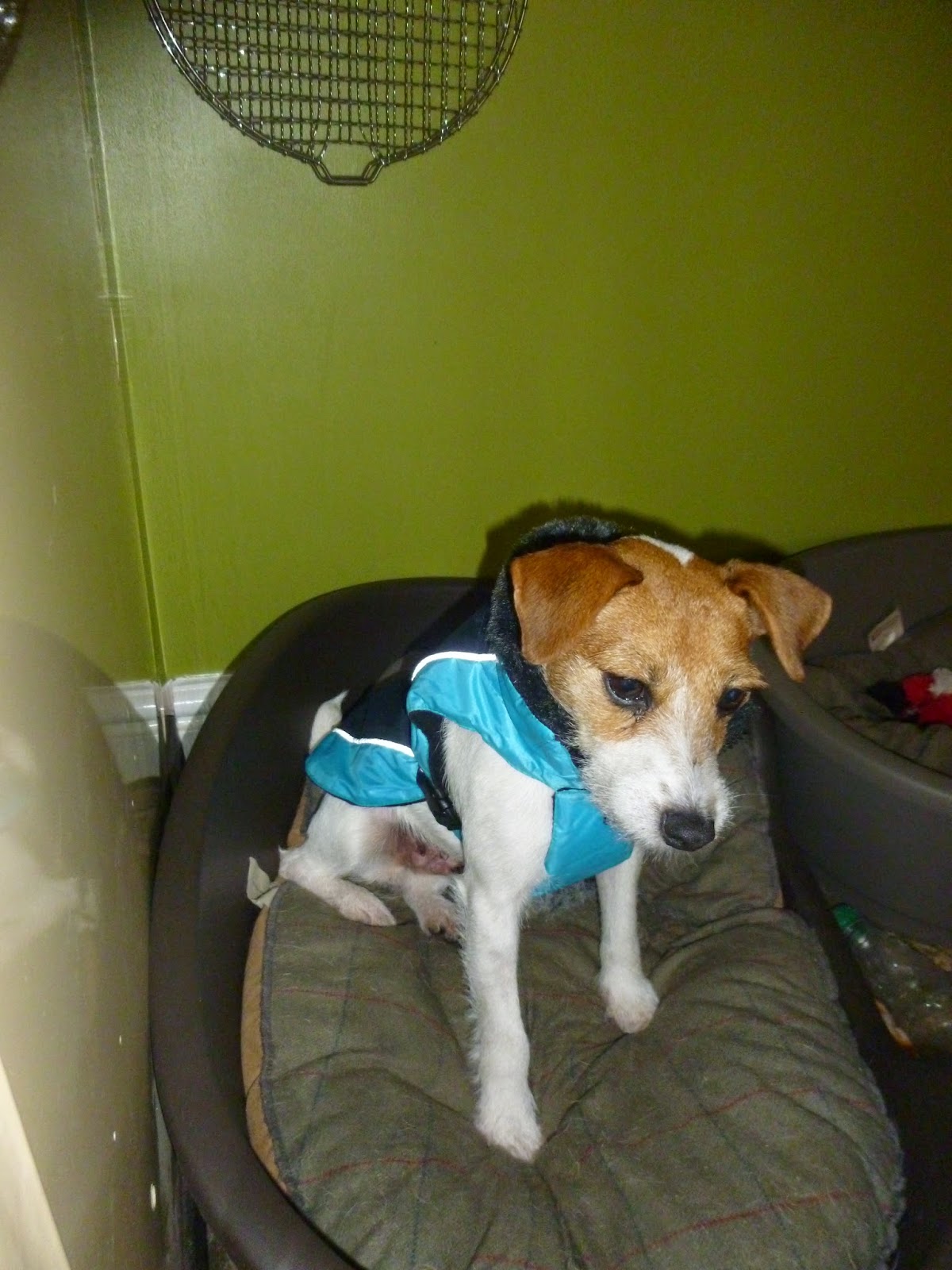 Mavis in her 'keep me cosy I've hardly any fur' doggy coat, which we bought when we rescued her the first time.  She shivered so uncontrollably with cold whenever we took her on the prom in Llandudno that we went mad and bought her her very own waterproof and cosy jacket.  She got lots of admiring glances on our strolls until she outgrew it.  Now unfortunately it fits her again as she lots lots of condition having her pups and being so mistreated. 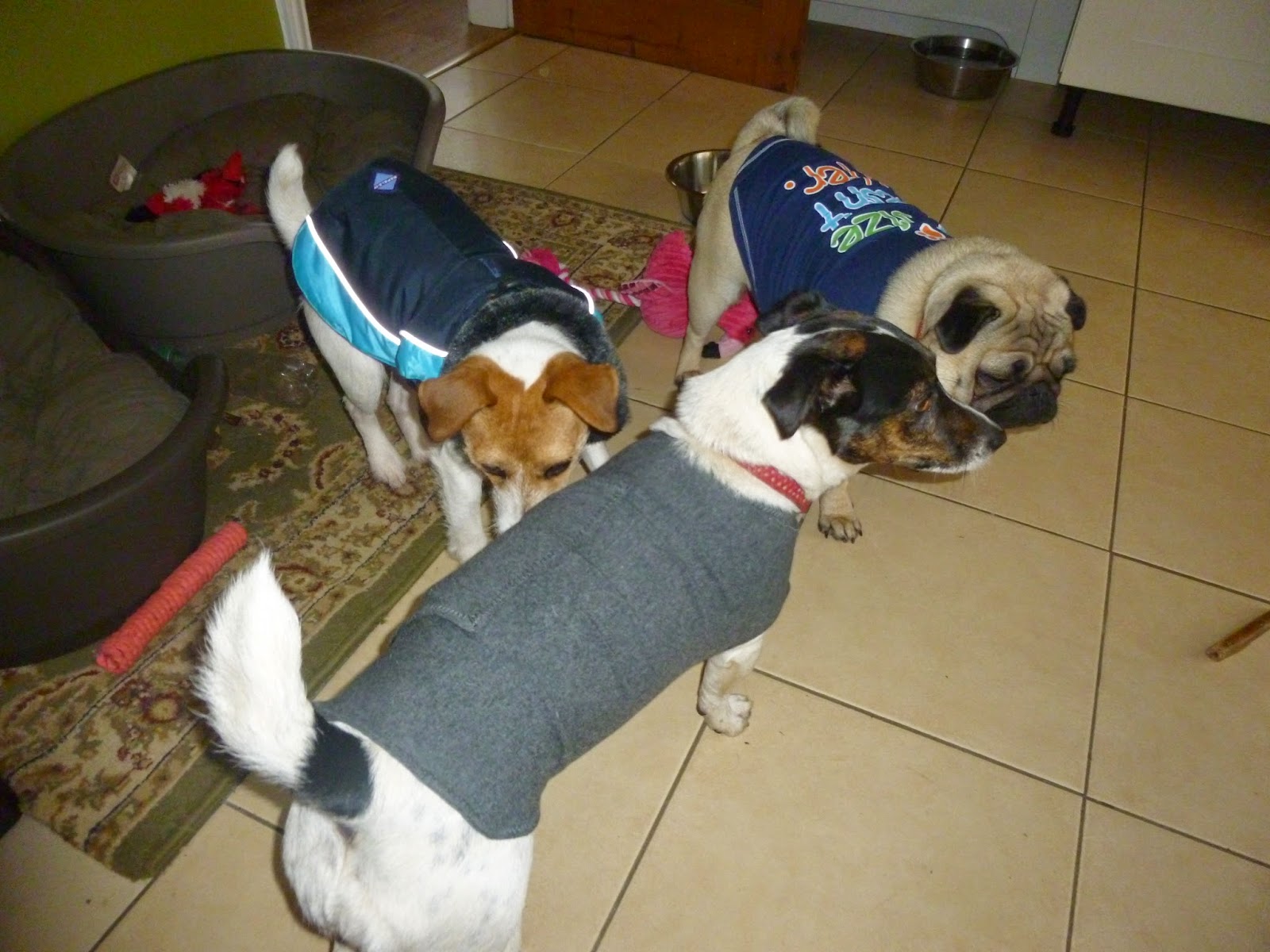 Rosy has her 'Cosy Rosy' ..... which is really her Thunder Jacket but she knows what we mean when we say "do you want your cosy rosy".  We get it out during storms or on Bonfire Night, and she waits patiently while we put it on for her before curling up to sleep away the 'danger'..  These felted, Velcro'd jackets are specially designed to help dogs that are nervous during thunder storms, loud bangs etc it makes them feel cuddled and safe while they are wearing it .... and it really works!!

All the dogs except Mavis were then undressed before going out, they don't really like wearing clothes, but Mavis seemed nice and cosy and as we were just about to head for West Shore in Llandudno for a long walk, we thought she would appreciate being warm. 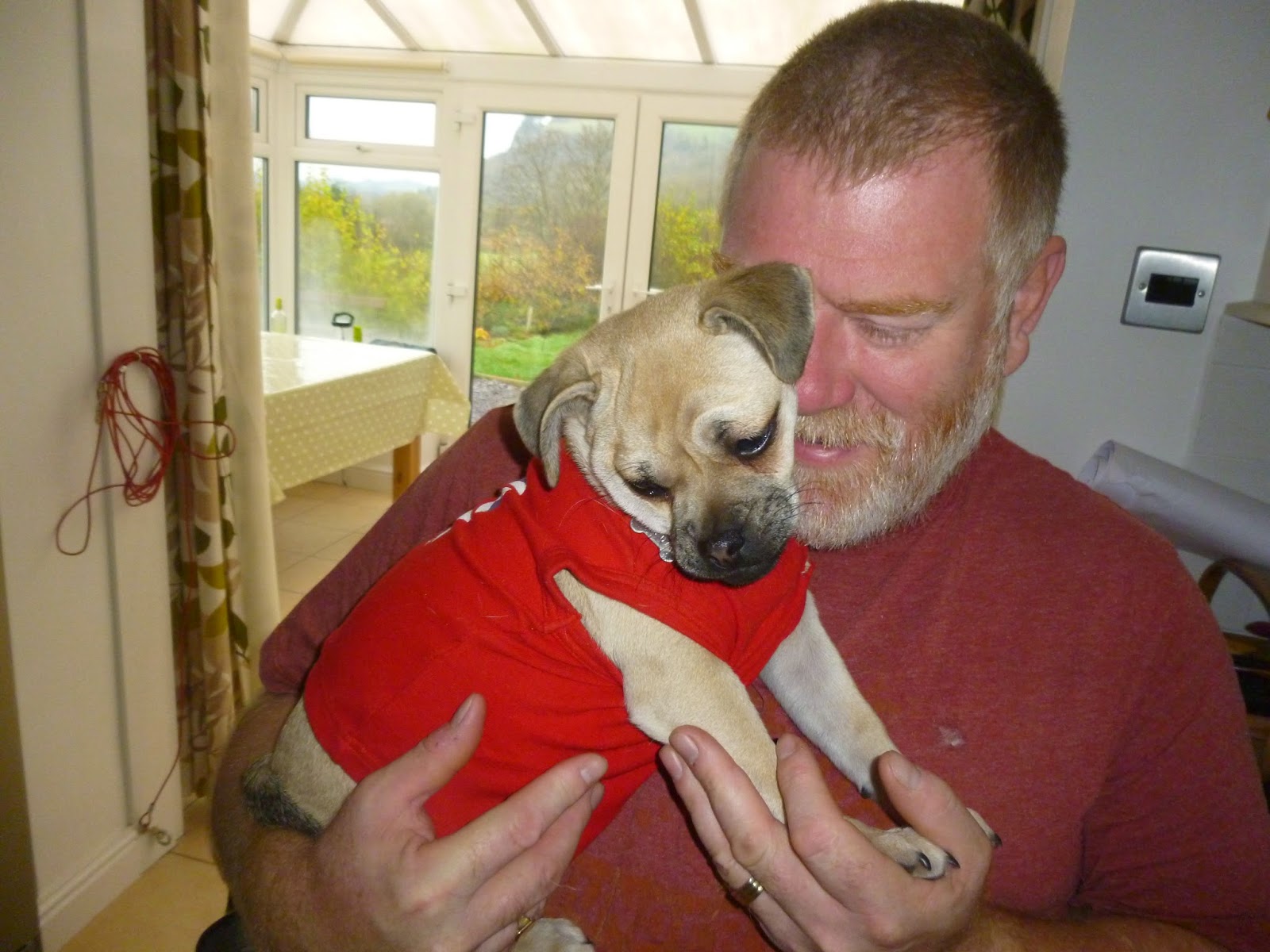 These two really are a pair of cuddly buddies.

Thank you for all the comments on yesterdays post.

For now the lamp remains but some of the comments were really thought provoking.  One from Virginia saying 'I admire your decluttering, but there's also beauty and emotional connection to consider, and a table light tick those boxes ... don't they?'  really got me thinking.  NO .... I do not have emotional attachment to anything I own enough to hold onto things, literally everything could be lost in a house fire (except obviously us and the animals)  and after a moments pang of upset I would quite happily start replacing things .... if we felt we needed them again. 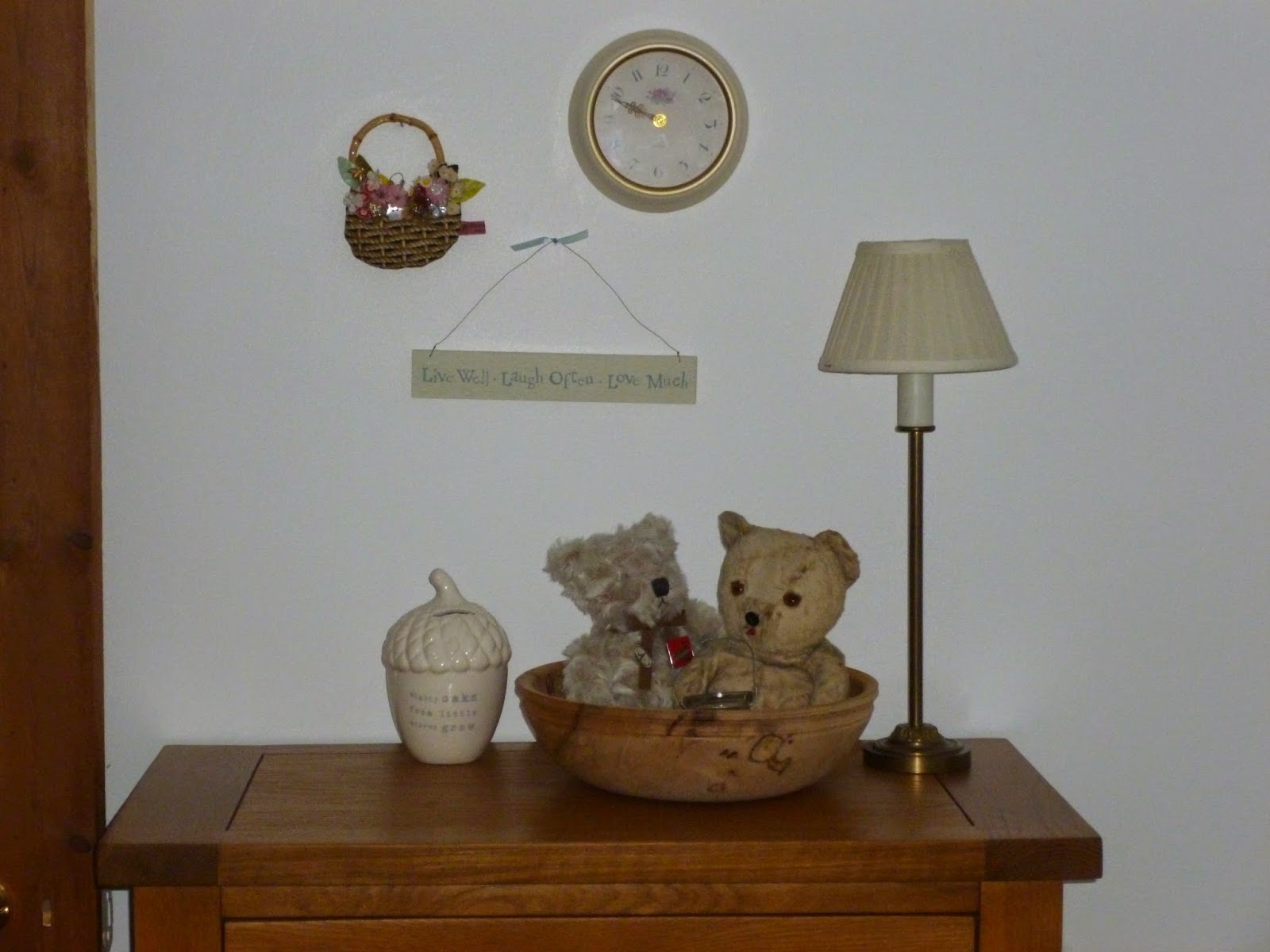 Sure there are things like photographs in boxes, cards we have sent each other on special occasions and even the teddy nearest the lamp, who is called Valerie which I have had since my first birthday and who was Simon my son's constant companion for five years, that are irreplaceable in the physical world, but even if they were lost to fire or flood their memory is in my head and always will be.  So I don't feel the need to keep anything if it starts to feel like it is owning me.

I can almost feel that lamp slipping off the chest of drawers ......