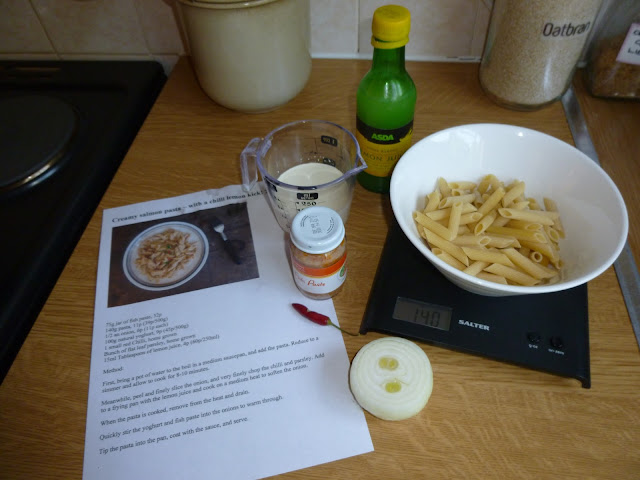 I've been trying to re-create a meal I love and have on a regular basis at Pr*zzo, our favourite Italian eating house, for quite a while now.  I object somewhere at the back of my mind paying for pasta when I'm out even though they do vouchers which mean that usually when we eat there it's Two for One or Buy One get One for £2.50, but still when you know you can get a great big bag of pasta for less than a pound it seems extravagant to have this too often.  Being able to make this luscious meal at home has been my one aim for months now.
The meal is Penne Con Salmone, this is how it's listed on their menu -

Salmon fillet, broccoli and red chilli in a red pesto and cream sauce'
and it costs £10.95 for the 'Classic' version.   So even at half price if we use a voucher it is still £5.50, I guess if I class it as the £2.50 meal on that particular offer it's not too bad, but still I wondered was it possible to get that cost even lower at home and have the same delicious flavours and thus be able to eat it more often.
Then I saw  this recipe on Jack's Blog - A Girl Called Jack.
﻿ 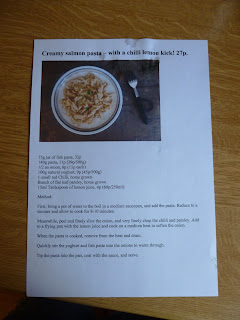 I printed it out and had a go the other night (before we started Juicing).  It took us a while to even find the pastes in Sainsb*ry's, I've not used them for years and have never thought of incorporating them into other recipes and not simply smearing them onto sandwiches.  Absolutely inspired. 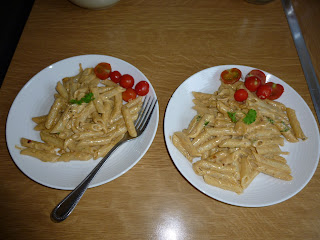 Well who knew!!
That's it, the exact same flavours as the 'posh' restaurant dish, and using Jacks recipe exactly comes in at 27p a head, yes that's right 27p.
Now I had to change it slightly as I had no yoghurt made up but did have some slightly out of date double cream, so that went in instead, I also had no fresh chilli, but I did have a jar of just dried chillies off my plant so I used one of those instead.
If I was making it again I would add some frozen broccoli to the pan of pasta as it was cooking and recreate even more exactly the restaurants version.  But this time I kept to the recipe as much as I could,. and just added some of our home grown tomatoes to the plate and it was delicious.  Just what we like nice simple straightforward, cheap and tasty food.  One we'll definitely be turning to again and again.

So it all ended with a 32p jar of fish paste.
And just think of what you could do with all the other flavours available, we have to stop thinking of them as simply sandwich spreads and start thinking of them as 'mushed up ingredients' !!
Thanks Jack :-)
Sue xx
To read the recipe more easily just click on the picture.