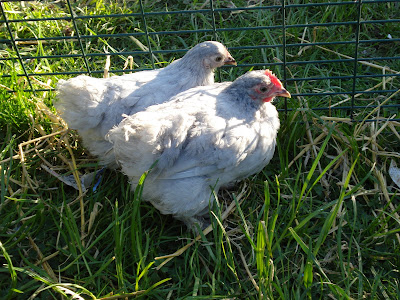 Caldwell and Alice at 9 weeks old.
~
At first this morning I didn't know what to write about, so I thought I would take a look back at May 2010 and see what was happening on the farm this time last year. POW..... there it was... the BIG news that I haven't told you about.
~
This time last year we got the first Lavender Pekin Bantams, Caldwell the cockerel (named after Lovely Hubbys' Dad), and his four wives, Alice, Isabel, Prudence and Little Lucy. They settled in well. We hatched some of their eggs late last year in the incubator and got our new girls... Iris, Fern and Sara, and their four little brothers who all went off to start families of their own.
~ 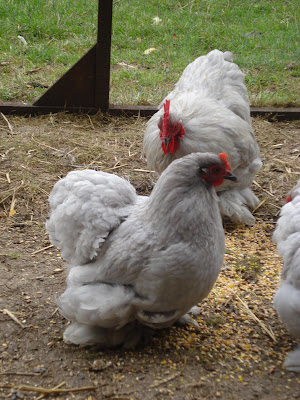 Caldwell and Alice before she started sitting on her nest.

Well...the big news is.....any day now Caldwell and Alice are about to be parents..... of their very own little brood of chicks.

She has been sitting patiently for over two weeks, nurturing her eggs and being a very good expectant Mum. She has evicted 3 of the eggs, which I tentatively cracked open to see why. They had never developed into chicks, now how she could know this I have no idea, but she was right each time. This week I guess she is 'talking' to them and getting no response from some, so I understand this weeks eviction, but at the start of last week there wouldn't have been enough development....amazing! Caldwell is being a devoted husband, checking on her whenever I go near, he even took her some leaves to eat the other day, something I had no idea a cockerel would do.

Hopefully they will hatch before we go on holiday.....I'll let you know.