The farm is a quiet place this morning...... 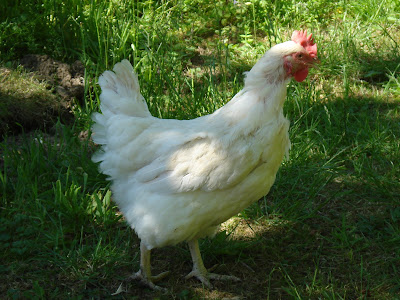 The farm is a quiet place this morning, the cockerels crowed briefly and have now gone completely silent. At this time of the morning the girls are laying and there is usually a cacophony of sounds, arguing over nesting boxes and screaming for the best worm or bug found in the dew ladened grass, but today you could cut the stillness with a knife.
~
When I opened the doors this morning, house number two girls (which I open first) came down the ramp with the usual jostling and arguing over who had right of way, Norman crowed and thudded down off his perch, there's no graceful dismount when you're as heavy as he is!
~
Then I opened house number one, I knew immediately that Lovely was with us no more. The girls trouped silently and carefully down the ramp and dispersed quickly to the feeders, All the birds went quiet and the cockerels stopped crowing. I opened the nesting box lid and there she was, lying deathly still in her nest box, warm to the touch and soft, she had only been gone a short while...and in the nesting box next to her, resting her head on the edge so she could watch her friend was Molly.
~
I have never seen a chicken SO devastated. There is no other word to describe her. I carefully lifted Molly out and sat her next to the water drinker so she wouldn't see me take Lovely away and then picked her up to give her a cuddle. She closed her eyes in resignation and I knew then that if I didn't act quickly she would be joining her best friend very soon.
~ 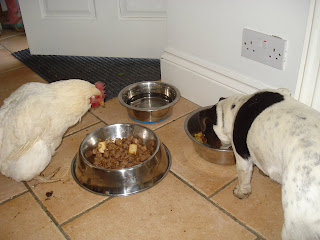 While I was carrying her she seemed to 'pull herself together' and her eyes were suddenly sharp again, hopeful then. I brought her into the house for a while and set her down in her favourite spot, next to the dog bowls, she helped herself to some meaty chunks and even Rosy, more subdued than usual, seemed to feel the chickens' need to eat and didn't sit growling while her food was being nibbled at.
~ 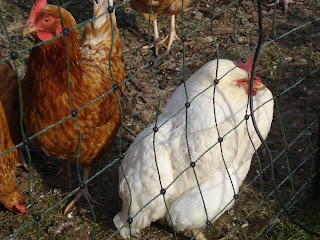 After half an hour in the house I took her back to join her pals, but she is a solitary figure, hunched into herself. I hope she can pull herself round from this but she is elderly for an ex-commercial free-ranger, their little bodies are pushed to the limits for the first 14 months and then usually they are turned into pet food. At least she has had an additional couple of years with the sun on her back and the freedom to roam but I would like her to have a little more. So sad that Lovely is gone, although her end was the most peaceful of ends, now I am on 'Molly watch'.
~ 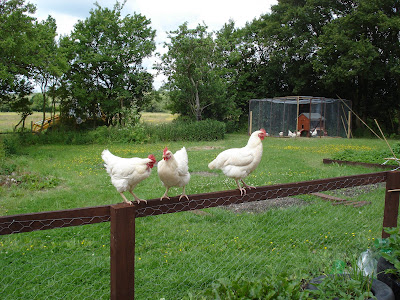 Molly, Lovely and Big Lovely during their first month on the farm in June 2009.
~
The reason for the 'Lovely' names, is that when we were naming the birds, we managed the first seven names very easily and then we had three that were identical. I said 'but they're all lovely so what do we call them' and thus they became the 'Three Lovelies'. Shortly after, one of them was taken by a fox and the remaining two became Big Lovely and Little Lovely because that was what they were. When Big Lovely died last year, Little Lovely seemed to grow in stature and she became simply 'Lovely'. And now there are no more Lovelies on the farm....so sad.
~
I'll be back later with my Live Below the Line update.
~