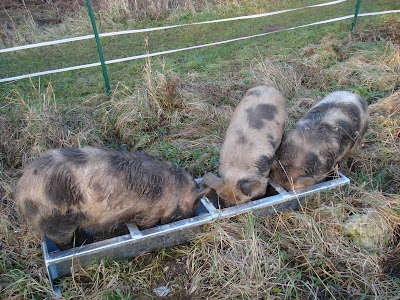 ~
Well the Kunes are settling in to their new home at last after a very adventurous couple of hours. They followed me like a dream, well I'm their Mummy and I feed them from the lovely orange bucket, so they will follow me anywhere if I'm carrying a big orange bucket.
~ 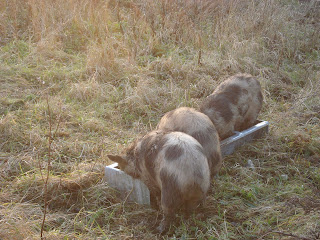 ~
They got to their new little field and were rewarded with the food from the bucket being placed in their brand new trough.....no problem. We quickly finished off the electric fence around them and stood back to congratulate ourselves on a job well done. Then Lovely Hubby went to shut the door of the container (huge big storage container...not plastic tub!!) the huge metal clang scared Tayla and she was off like a shot. Straight through the electric fence and back to the safety of the house.
~ 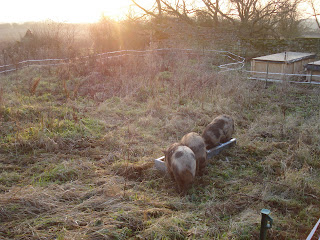 ~
Well we followed and tried to coax her back, but she was having none of it and refused point blank to go in the right direction. LH tried to get behind her to pick her up, but she was wise to that, the minute he was out of her line of vision she was off again. In the end we gave up, darkness was falling and we were tired, so we opened the door to their old enclosure and she shot in.
~
When I went out later to shut up the henhouses for the night she was crying and making lots of noise, so I gave her some extra straw to make up for missing the warmth of her sisters to cuddle into and she spent a lonely night by herself. ~ This morning I went over to feed them and one look at me coming over with the food and they came running to greet me .....straight through the electric fence!! Because they were hungry I managed to entice them (with the aid of my big orange bucket) into the gated corridor which leads into the woodstore (their bedroom) and left them there eating breakfast, LH had the brainwave of fetching Tayla to join her sisters in there while we fixed the fence. This worked like a charm and she followed me back to the barn and straight into the little room to be re-acquainted with her sisters. ~ After our breakfast we came back out and reinforced the electric fencing with two strands of wire and strong fence posts in each corner to keep everything nice and taut. We let them back in through the door into their bedroom and now they have the run of the area and a nice corridor and bedroom to keep warm and dry in. ~ Fingers crossed they are still in there now.....we'll see what happens at feeding time this afternoon. ~ 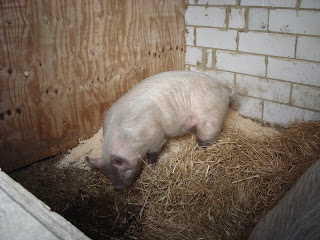 Monty and Martha were relocated without incident, although Monty did decide that two laps of the house were preferable to one. So now they are warm and secure in the biggest room of the barn awaiting a potential purchaser tomorrow. They are already looking cleaner after being out of the mud for 24 hours.

An eventful day yesterday and with our first advert appearing in the Farmers Weekly this week it's been an exciting couple of days, with lots of folk phoning with interesting offers of land and housing for us and our pigs.