Red Kites in the Veggie Bed!! 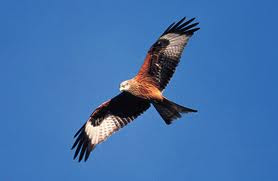 First light this morning when all the world was frosty, the sun barely coming over the horizon, I spotted a wonderful sight. Sat in the small vegetable bed motionless was one of these magnificent birds. It sat there for what seemed an age, but in fact could have been no more than 2 or 3 minutes. Something I've never seen before, and then with a whoosh of it's wings it was airborn and circling over the farm. Magnificent in it's colouring and size.
~ 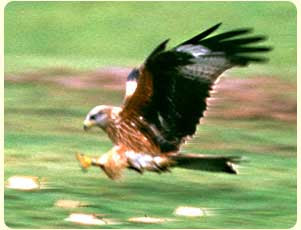 Now we always smile when it's announced on television or when we read in magazines how rare these are, and indeed they are, but here on the farm we see them everyday. Flying solo or in pairs, hunting. Sometimes in larger groups, soaring and riding the air currents. Watching them is mesmorising, the control they show when flying using their large tail as a rudder and changing direction as though they are having SO much fun.

The chickens see them as a threat and there is usually a warning call from the cockerels as soon as one comes into view, the hens all stand watching the danger in the sky and then gradually go back about their busy day of pecking in the grass and unearthing the bugs and worms. The cockerels stay alert, ready to defend their women folk from an attack.

Only once have we lost a hen to a Red Kite, an extremely rare occurence, but when we mentioned it to a visitor to the farm, not an unheard of one. She wasn't carried away, maybe she was a touch too heavy but she was killed instantly by the sharp beak.

Beauty and danger, magificence in nature.

( Pictures taken from the web.)