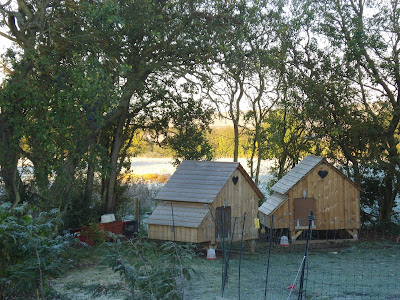 We woke this morning to a preview of Winter. There were no animal or bird noises to disturb the icy cold stillness of the farm. As the sun came over the horizon I decided that it was time to start the morning chores. ~ 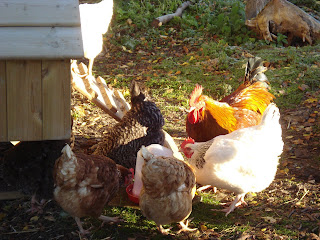 The birds came out of the henhouses much slower than usual, but once the sunshine had warmed their feathers they helped themselves to food and the freshly poured water.
~ 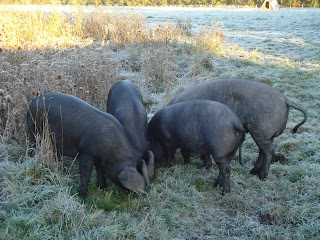 The pigs bunched tightly together to eat their food. While I went and thawed out their drinking troughs.
~ 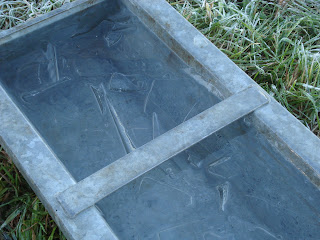 Smashing the ice up with my boot and then pouring on hot fresh water, which meant a drink that would not chill their tummies too much!
~ 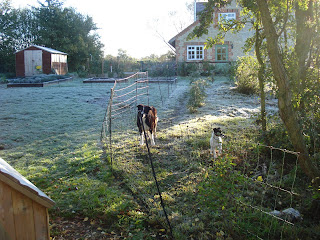 The dogs waited patiently while I finished all the tasks, then it was time to roam the fields in the warming sunshine. Watching the world come to life, with the steady hum of the motorway in the distance, as folk hurried on their way to work. On the way back we accidently disturbed the owl perched on the rafters of the barn, warming herself in the suns rays. She flew off with a hoot of disgust at her sunbathing session being brought to an abrupt end.
~
For me it was then time to hurry back to the warmth of the house, to peel off the layers and sit back with a warming bowl of porridge.
~
It's hard dragging yourself out to do the chores on a cold and frosty morning, but once they're done and you're back indoors with a steaming cup of coffee clutched in your rapidly thawing fingers, the sense of achievement at making your animals comfortable is more than worth it.
~
I hope your day warms up nicely.
~
Sue xx
Posted by Sue at 11:20